It appears that Marvel’s Agents of S.H.I.E.L.D. was planting much more than a fun Easter egg in Season 4, when it put Anton Ivanov’s severed head inside a jar.

Based on new intel from one of the ABC series’ executive producers, it sounds like the groundwork was indeed being laid, in late Season 4, for the introduction of the highly unusual-looking Marvel villain known as M.O.D.O.K. Fans at the time speculated as much, seeing as Watchdogs leader Ivanov (played by Zach McGowan) had told Aida his LMD body was “only designed for killing” — and M.O.D.O.K. stands for Mechanized Organism Designed Only for Killing.

Fold in Ivanov’s code name (Superior, a la M.O.D.O.K. Superior), his ability to self-clone as an LMD, and his aforementioned head-in-a-glass case fate, and the dots pretty much connected themselves. 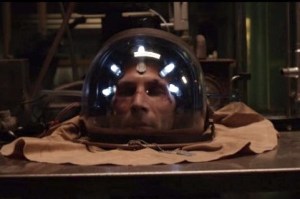 Recalling any would’ves, could’ves and should’ves as the series wrapped its seven-season run on Aug. 12, executive producer Jeffrey Bell shared with The AV Club, “I’ll say this, I don’t care: We were given the green light originally to use certain characters from Marvel, and started to break story based on those characters” — including M.O.D.O.K., he let slip amid a calculated cough — “and then they retracted it. So there were a bunch of things that were going to get a little bats–t crazy that were above our pay grade, in terms of the toys we were allowed to play with.”

Co-showrunner Maurissa Tancharoen, though, spun the Marvel-ous handcuffing as a plus.

“I think some of our best storylines and character development was born out of us having to pivot and scramble. That’s the fun of our jobs — and the nature of working with an entity like Marvel, where there are a slew of characters to pull from, and there are a bunch of established moving parts. And then when you place your hopes and dreams in something and then it’s not possible… you scramble. But that’s how our [original] mythology was even formed in the first place.”

Did you suspect M.O.D.O.K. was coming once Ivanov’s head landed in a “jar”? Would you have been curious to see how the show depicted his unusual form?