Warning: The following contains spoilers for Sunday’s penultimate Season 3 episode of Yellowstone. If you’d rather watch first, read later, git along, little dogies. This ain’t the place for you.

As Season 3 of Yellowstone neared its conclusion Sunday, Jamie did what I reckon we all figured he would and looked up his biological father, Garrett Randall (Will Patton). That was how desperate the AG was to figure himself out. Needless to say, it wasn’t pretty. “Your mother sold her body for drugs, and I killed her for it,” said Garrett. “That’s who you are. That’s where you come from.” The ex-con did his best to shoo away his offspring. “You don’t wanna know me,” Garrett insisted. “I killed everything I ever loved and everything that ever loved me.” But Jamie couldn’t bring himself to leave. “I need to know you,” he said, “or I will never know myself.” So they had a coffee that ya gotta imagine is only gonna lead to heartache down the road. And that was just one of the big twists in the penultimate episode. Read on, and we’ll go over all the rest.

‘YOU DON’T KNOW JOHN DUTTON LIKE I DO’ | As “Meaner Than Evil” began, we learned that Colby and Teeter had survived their run-in with Wade — but barely. She had a horrifying gash in her forehead that Colby — yikes! — stapled shut. On the plus side, he finally kissed her. “You shoulda f–ked me while I still had a face,” she said afterwards, “but that’s all right. We’ll work on your timing.” (For once, I actually understood what she said!) Back at the bar where Walker was singing last week, the “dead” man turned down a fan’s offer to spend the night — with disastrous consequences. Leaving the place alone, he wound up being abducted by Rip and Lloyd. The following morning, Kayce suggested to Monica that they bail on Tate’s Meet the Teacher night and home-school their son. If his future was gonna be running the ranch, there was nothing that he couldn’t learn there, anyway. Monica doubted that her parenting style and John’s would gel. Why? asked Kayce. John had never once spanked him. “Nope, just burned his brand into you,” his wife replied. Game, set, match, Monica.

Later, Rip informed Kayce that “I found something that you forgot to get rid of” and dragged it back to the ranch. In other words, Walker. Why, Rip wanted to know, was that problem still breathing? Kayce’d killed many a man, he admitted, but “I never murdered one and never will.” So what the hell were they gonna do with Walker now? They could either bury him in one of those graves John had left open a few episodes back or… or Walker could come back to the ranch and prove himself. He wasn’t crazy about that idea, but as Kayce pointed out, “Beats dyin’.” While all that was going on, Wade and his son visited Roarke, who encouraged them to keep poking at John until he “does something he can’t take back,” something that Market Equities can use in court. All right, said the codger, but he wanted to bring in some extra men, then. Do I have to tell you that those extra men wouldn’t get there in time? Didn’t think so. 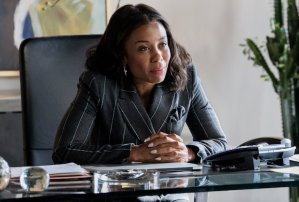 ‘DON’T DO ANYTHING STUPID’ | Once John and Kayce were brought up to speed on what had happened to Colby and Teeter, the Duttons’ patriarch told Rip that the bunkhouse boys had the all-clear to go ahead and exact vengeance. Be smart about it, he said, “and take that trash to the f–king train station.” Oh, and bring him back that mysterious thing that Wade had that belonged to John! When Beth arrived for work at Schwartz & Meyer, she found Willa at her desk. Well, it wasn’t actually her desk, ”not anymore,” said Willa. “It’s my desk now.” And since Market Equities had become S&M’s major shareholders, Beth was fired. Once the sting wore off, though, Willa said, Beth could come work for her. Fat chance. “When all this is over, I’m gonna hang your diploma above my toilet in my guest house,” she hissed. “The sting never fades with me. It is a painful lesson and one you’re about to learn.”

Before the bunkhouse boys took off to get even with Wade and his son (does he even have a name?), Laramie got a look at Walker, and simply put, one look was all it took. Yellowstone was beginning to lose its luster for Mia, but “I dunno,” said her pal. “I think there might be a little luster left.” In the field, Wade and Junior (OK, let’s call him that) rode after a random bunkhouse boy… straight into an ambush. Junior rode smack into a tree branch and was killed instantly. “Got off easy,” grumbled Lloyd. Wade, not so much. First, Rip roped him and dragged him through the sagebrush, then he looped a noose around his neck and demanded the name of his employer. Not sure Wade hesitated even five seconds before giving up Roarke. Finally, Rip had Walker prove himself by cutting off of the old man’s chest his Yellowstone brand — that’s what belonged to John that he wanted back! “Karma comes in all shapes and sizes,” sighed Walker. “Guess it’s me today.” Once that ugly business was done, Rip hanged Wade. 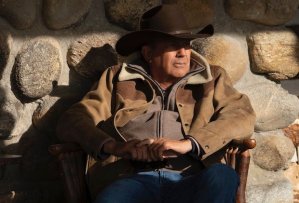 ‘EVERYONE FROM THREE STATES AROUND DUMPS THEIR SECRETS OFF THAT CLIFF’ | After an awkward family dinner at which Kayce made the mistake of suggesting they talk business, John dropped some wisdom on his son. “Ya can’t reason with evil,” he said. “Evil wants what it wants and won’t stop until it’s won or ya kill it. The way to kill it is to be meaner than evil.” And the trick? It’s figuring out how to do that but still love your family and enjoy a sunrise. As the episode drew to a close, Lloyd and Walker dumped the bodies “at the train station” in what the older man explained was “a county with no people, no sheriff and no 12 jurors of your peers.” Everybody got rid of their secrets at that particular cliff, he added. Walker’s job now was to figure out how not to become one of ’em! Meanwhile, Rip branded Colby and Teeter; they were Yellowstone for life now. So, what did you think of “Meaner Than Evil”? No good can come of Jamie bonding with Garrett, right? Hit the comments with your thoughts.