Ted Lasso isn’t the first series based on a character from a TV commercial — anyone else still haunted by ABC’s Cavemen? Or CBS’ Baby Bob? — but it might be the first good one.

The new Apple TV+ comedy, which hails from series star Jason Sudeikis and Scrubs creator Bill Lawrence, is based on a series of promotional videos for NBC Sports that aired in 2013. Seven years later, the Saturday Night Live vet reprises his role as an American football coach who is hired to manage an English soccer — err, football team… despite having zero soccer — err, football coaching experience. Its first three episodes dropped on Friday.

The pilot reintroduces Sudeikis’ alter ego during a SportsCenter broadcast, where his unlikely hire is first announced. Despite his success leading a college team to its first-ever national title in American football, we find out that the Kansas native is best known for a viral video that shows him dancing like an imbecile in the locker room. It’s the video for which he’s recognized by a British teen aboard a transatlantic flight. 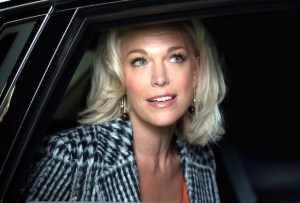 Lasso and his assistant, Coach Beard (fellow series co-creator Brendan Hunt), soon touch down in England. After a brief sightseeing pitstop, they’re driven to the Nelson Road, home of AFC Richmond. There, timid water boy Nathan (Intelligence‘s Nick Mohammed) takes Lasso and Beard to meet with the team’s new owner, Rebecca Welton (Sex Education‘s Hannah Waddingham). She gives Lasso a tour of the stadium, then blindsides him by sweeping him into a press conference that immediately goes south. When it becomes obvious to everyone that Lasso knows next to nothing about European football, Rebecca steps in to defend him. She tells a room of unconvinced reporters that her struggling club will overcome a period of “profound mediocrity” by taking a new approach and doing things “the Lasso way.” 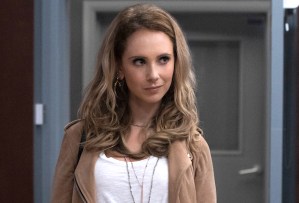 Lasso fares no better when he introduces himself to some of his players. Among them is top scorer Jamie Tartt (Humans‘ Phil Dunster), who blows off Lasso’s introduction to the team when girlfriend Keeley (Dirty John‘s Juno Temple) arrives to pick him up for his waxing appointment. There’s also captain Roy Kent (Derek‘s Brett Goldstein), whose complete lack of confidence in Lasso is most overt. After he compliments Roy on his ability to lead the team, the player responds by referring to his new American coach as “Ronald F–king McDonald.”

Of course, no one has less faith in Lasso than Rebecca, who was lying through her teeth to reporters. In fact, she’s secretly hoping that her new hire falls flat on his face. She reveals to communications director Higgins (Downton Abbey‘s Jeremy Swift) that she wants to accelerate AFC Richmond’s downfall so she can stick it to the team’s former owner, her philandering ex-husband Rupert. Higgins is reluctant to assist Rebecca, so Rebecca goes and offers him a promotion.

At the end of the night, Lasso heads to his new apartment and phones his wife and son, who are back in the States. It’s during his conversation with his wife that we discover that his marriage is in trouble — but his tone suggests that he’s not ready to throw in the towel just yet.

What did you think of Apple TV+’s Ted Lasso? Will you continue watching, or was one episode enough to determine that it’s not your cup of “hot brown water”? Drop your thoughts in a comment below.