World of Dance‘s Season 4 finale got off to a strange start on Wednesday: The episode was filmed just as gatherings were starting to shut down as a result of the coronavirus outbreak, so the finale was shot without a studio audience, judge/EP Jennifer Lopez explained at the top of the hour. She then reassured viewers that “a dancer performs just as hard for three people as they do for 300.” While that may be true, not having the audience energy definitely gave the finale a different feel.

Still, the final four competitors — Oxygen, MDC 3, Jefferson y Adrianita and Géometrié Variable — put their best (dancing) foot forward in hopes of winning $1 million. J.Lo noted that for the first time in the show’s history, she didn’t know who was going to take home the grand prize, and I had to agree with her — at first.

Oxygen took the stage first, bringing back their signature Shiva moves, with an electrified twist, and they, once again, wowed the judges. But the group failed to fully follow J.Lo’s mentoring session advice to punch up the ending, so the final seconds of their performance still fell flat. Their final score: 93.0. 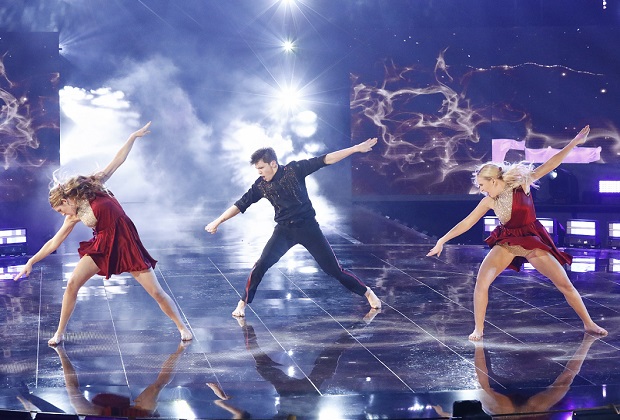 Up second was MDC 3, who used their journey through the competition as inspiration for their story. J.Lo praised the “breathtaking” quality of their dancing, while Ne-Yo called them “flawless.” Derek Hough was in awe of their sick head slides, as was I. All that added up to a 95.7, knocking out the impressive Oxygen, and at this point, I started to really believe that MDC 3 was going to win.

Jefferson y Adrianita were up next, and while their quick footwork and death-defying tricks were solid, the judges correctly noted that one of their lifts was clunky and all that walking up and down their prop stairs hurt them. Still, the duo got a high score of 95.3, but just barely missed edging out MDC 3.

Finally, it was time for Géometrié Variable, who are so unique and interesting and skilled, but with no big “wow” moment and a lack of emotion, they just didn’t stand a chance. So you didn’t even need to see their 93.3 score to know that MDC 3 won. (Watch the winning performance below.)

What did you think of the finale outcome? Cast your vote for who should have won, then hit the comments to back up your pick!