The following contains spoilers from the series finale of Marvel’s Agents of S.H.I.E.L.D.

The Agents of S.H.I.E.L.D. series finale on Wednesday left a few characters in a somewhat curious place. Could it be that they now agents of… S.W.O.R.D.?

After the team vanquished one Chronicom army with, well, kindness, and obliterated the other (as well as Nathaniel Malick) with the quake to end all quakes (and almost end Quake herself!), the series leaped forward one year, where, Coulson, Daisy et al reunited at ye olde Swordfish club. (Wait, the whatfish?)

As the former teammates caught up with each other one by one, Jemma (played by Elizabeth Henstridge) asked Daisy (Chloe Bennet) how things were going with her and The Man Out of Time, Daniel Sousa (Enver Gjokaj).

“He’s made for this work, he’s solid,” she added, not specifying what said work is. “But he does keep calling us the ‘Astro Ambassadors,’ so yeah… he’s a dork. But he says hi.”

When the brief gathering — which we realized was virtual, the Zoom call of Zoom calls! — ended, we saw Mack and Yo-Yo return to their respective S.H.I.E.L.D. gigs (aboard a helicarrier and chasing an 0-8-4)… FitzSimmons resume a picnic with daughter Alya… and May head off to give Flint and other cadets a lecture at the new Coulson Academy. 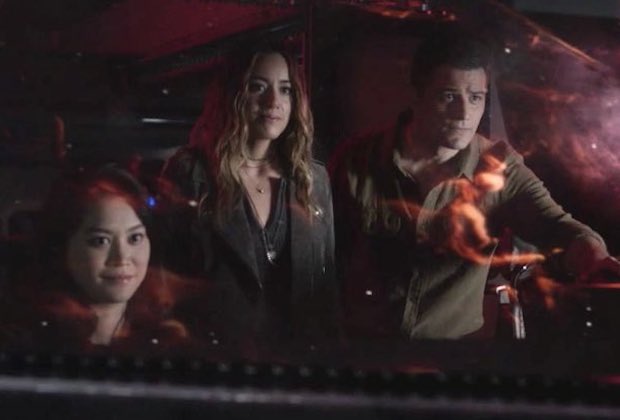 As for Daisy, we realized that she in actuality was aboard Zephyr 3 (!) with Sousa and her redeemed sister Kora, where they were about to marvel at on an out-of-this-world sight in deep outer space. (Daisy did joke earlier that she prepped Sousa for this gig by screening E.T., which she said made him cry like a baby.)

It is tempting to surmise that Daisy & Co. are now working for S.W.O.R.D., the Marvel comics entity that Nick Fury seemed to be starting up, alongside some Skrull, in a bonus scene from 2019’s Spider-Man: Far From Home. S.W.O.R.D. is also rumored to have some sort of presence in Disney+’s upcoming WandaVision series starring MCU vets Elizabeth Olsen and Paul Bettany.

The Sentient World Observation and Response Department in comic book lore is described as a “counterterrorism and intelligence agency” whose “purpose is to deal with extraterrestrial threats to world security. and is the space-based counterpart of S.H.I.E.L.D.”

Some deft freeze-framing during Daisy’s final scene in the series finale, however, reveals that regular ol’ S.H.I.E.L.D. logos — no S.W.O.R.D. sword — are on the Zephyr’s seat backs and glass partitions. But maybe they just haven’t gotten around to ordering new furnishings…?

S.H.I.E.L.D. co-showrunner Jed Whedon said (joked?) at a press event this week that “yes,” he would be open to an Agents of S.W.O.R.D. follow-up — though as fellow executive producer Jeffrey Bell noted, “We tried S.W.O.R.D. early [in the series] and we were shut down.”