JR Bourne has a lot to say about his experience working on The 100, but these two words pretty much sum everything up: “Holy crap.”

Introduced in the CW drama’s sixth season as Russell Lightbourne, a god-like member of the ancient “Prime” family, Bourne’s character is now possessed by Sheidheda (aka “Dark Commander”), a man whose evil reputation precedes him. Until recently, however, only a handful of people knew that Russell’s physical form was a deception, adding yet another layer for Bourne to explore as a performer.

“I’ve never done anything like this,” Bourne tells TVLine. “And what a gift, just an unbelievable experience. “Sheidheda never really got an idea of who Russell was as a person, so to mimic that perfectly didn’t make sense in my mind. But it felt right to play who he thought, or what he thought, Russell was. It felt like an interesting choice to play him as how Sheidheda judged Russell, which was a bit of a hand-wringing fool.”

Read on for more of our Q&A with Bourne, including his thoughts on Sheidheda’s “love” for Indra. (Yes, you read that right.)

TVLINE | When “Russell” finally slaughtered his followers in Episode 9, it was almost… satisfying? Is that bad to say? It just felt like the big coming-out moment that Sheidheda deserved.
I completely agree. When I read that, I got goosebumps. And when I got to do it, that’s exactly how I felt. That felt like his first stage of coming out, and what a way to set the tone from here on out.

TVLINE | I knew from Teen Wolf that you can handle a crossbow, but that sword fight between you and Indra was really impressive.
[Laughs] I’ve never worked with a stunt team like this. They really shape everything, and not just for me. They’ve been doing it with the cast for years. They found my strengths and weaknesses as an actor and a fighter, and they made it seem like I’ve been doing that forever… and I have not. [Adina Porter] and I had an incredible time prepping and rehearsing for that. That whole thing, what an incredible dance. … And I get goosebumps in my scenes with [Adina]. The looks she gives, the way she delivers lines. The whole cast is wonderful to work off of, but she’s just incredible. 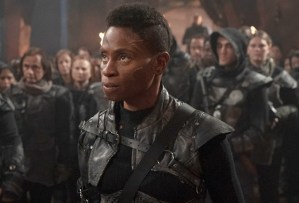 TVLINE | I have to admit that part of me thought Sheidheda was really going to kill Indra, before Madi swooped in to save her.
The idea of Sheidheda killing Indra… there’s too almost much there for him. He has a degree of respect for her, and as warped and twisted as his idea of love is, he also has that for her. He sees her, the pain that she has carried with her since she was a child because of him. The idea of having her at his side is more of a victory [than killing her].

TVLINE | Speaking of journeys, what do you think of your character’s new look?
I love it, I love it. The hair and makeup team, holy crap. They did an incredible job.

TVLINE | Generally speaking, what can we expect from Sheidheda as we approach the series finale?
He’s going to continue having fun gaining power and support, especially because they took the chip out of his head. His need and desire to gain that support and gain that power to become Commander again is back, and he’s going to have a lot more fun this time. He gains more freedom in his choices, and he just doesn’t see himself losing. Even when our heroes present a wall or an obstacle that might throw him off his game a little bit, he revels in it. Bring it on, bring it on, bring it on. He wants to die honorably.

TVLINE | And he’ll do it all with one eye!
[Laughs] Yes! When they said that, I was like “Goddamn it! All right.”

TVLINE | Which leads me to my final — and most important — question: Are you getting an eye patch?
Oh, there’s going to be a cool eye patch.

Your thoughts on The 100‘s final season? (Only six episodes left!) Whatever’s on your mind, drop it in a comment below.