For its season-opening trip to the Garden of Eden, Syfy’s Wynonna Earp gave the iconic location the cold shoulder — foregoing flora and fauna for a frigid tundra that seemingly stretched to the horizon.

“It was literally called Blizzard Lake — a body of water that had frozen,” series lead Melanie Scrofano told TVLine of the location shoot at Albertina Farms, south of Calgary, which spanned the season’s first two episodes. “So every time I ran on it, I was, like, listening for cracks, you know? I was so scared!”

The lake literally lived up to its name when, for the climactic moment in which Wynonna, Doc and Waverly scrambled to find an exit, a blizzard blasted the screen, amping up the end-of-world excitement.

“Oh, my God, the timing was incredible,” Scrofano raved. “We had actually shot that sequence and then we had to turn around [the cameras], and then it f–ing starts to blizzard and we’re like, ‘Well, this doesn’t match.’ So then we had to go back and shoot the first part again. But it was incredible because thematically it felt like the Garden was trying to work its magic on us. It was the type of thing you cannot plan and you cannot buy.” 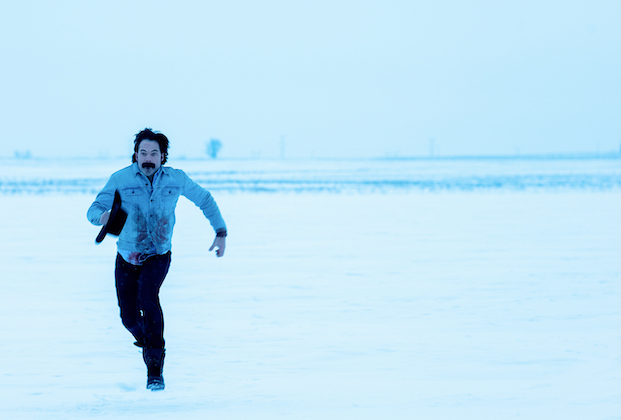 Alas, no magic was on hand to keep the cast anything close to warm as they filmed on a frozen lake. Now in its fourth season of production in Alberta, Canada, “It was the most excruciatingly painful cold I think we had experienced on the show,” Scrofano shared.

Storyline-wise, though the Garden’s chills and thrills may be behind them, Wynonna and Doc (played by Tim Rozon) returned home to find that life in Purgatory took a gnarly turn for the lawless during their fast-passing 18-plus months in that other realm. What will be their first step in processing this new world order?

“I think it’s safe to say alcohol,” Scrofano deadpanned. “I’m sort of joking, but I’m sort of serious.” Then turning decidedly serious, she offered that “Wynonna doesn’t have her [supernaturally powered] gun, but now she has Doc — and now he has her — so just to know that each other are safe, I think, will give them both strength to face whatever is coming up.”