The Star Trek franchise is boldly going into animated comedy with the new CBS All Access series Star Trek: Lower Decks… but did Thursday’s maiden voyage convince you to enlist for a full season?

Lower Decks — created by Rick and Morty writer Mike McMahan — takes place on the U.S.S. Cerritos, an utterly unremarkable Starfleet vessel with an utterly unremarkable support crew. “Our specialty is second contact,” Ensign Boimler (Jack Quaid) admits, which mostly involves getting paperwork signed. Boimler has ambitions of sitting in the captain’s chair one day, but his cohort Ensign Mariner (Tawny Newsome) just makes fun of him when she catches him practicing his captain’s logs. (She’s drunk on Romulan whiskey, to be fair.) We also meet new arrival Ensign Tendi (Noel Wells), a green-skinned alien who’s in awe of being aboard a Starfleet ship, and Ensign Rutherford (Eugene Cordero), a cyborg engineer who’s still getting used to his robotic implant.

Boimler and Mariner give Tendi a tour of the Cerritos, and Mariner breaks the news that they aren’t in charge of much around here: “We’re more like the cool, scrappy underdogs of the ship.” The ensigns are confined to cramped bunk beds in the very lower bowels of the ship, hence the derogatory nickname “Lower Decks.” They do have access to the Holodeck, though: Hoimler uses it to visit the ship’s warp core — nerd! — before Mariner switches it to, um, “all-nude Olympic training facility.” So the job does have its perks. 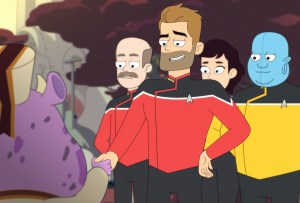 As the ship’s officers beam down to an alien planet, the captain pulls Boimler aside and orders him to report back if he catches Mariner breaking protocol… and one of the officers returns with an itchy purple spot on his neck. Soon, he’s freaking out in the crew lounge, transforming into a slobbering zombie and biting people left and right. The remaining crew members race to contain the outbreak, with Tendi called in to strap down the infected and manually pump a victim’s heart with her bare hands. (Ew.) Meanwhile, Boimler and Mariner are safely out of danger on the planet’s surface setting up a communication device, and Boimler spies Mariner covertly selling farm equipment to the locals. Forget all that, though, because soon they’re being attacked by a giant spider!

Boimler and Mariner strip down to their underwear and use their uniforms to distract the spider while Mariner explains that she was just bending the rules to help a species in need. (She’s been demoted before for similar offenses.) The spider does get a hold of Boimler, but luckily, it’s an herbivore and it just wants to suckle on him, so he’s left damp but unharmed. Even better, when they beam back aboard, the residual spider slime left on him turns out to be the key to a cure that neutralizes the zombie virus — so the ensigns saved the day, sort of! 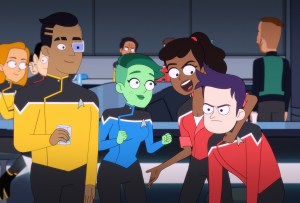 Tendi is left invigorated by the adventure (“I got to hold a heart!”), and she and Rutherford seem to hit it off as they nerd out together. Plus, Boimler decides not to rat out Mariner to the captain… and we learn that Mariner is actually (gasp) the captain’s daughter! Boimler and Mariner call a truce, and Mariner excitedly volunteers to be his mentor and help propel him into the captain’s chair. Yep, she’s drunk again.

Give the Lower Decks premiere a grade in our poll below, and then beam down to the comments and share your post-premiere thoughts.