Doom Patrol wrapped its second season on Thursday with a cliffhanger so intense, we almost screamed Robotman’s favorite four-letter word when the screen cut to black.

Let’s start with a quick recap: Setting aside their personal issues for a hot minute, Cliff, Rita, Vic, Larry and Miranda rushed to the carnival to stop Dorothy from releasing the Candlemaker. But rather than battling her imaginary friends, they found themselves facing off against their own; Cliff was torn to pieces by a foul-mouthed representation of Jesus, Rita engaged in a dance-off against a demonic version of the paper doll she once used for inspiration, and Vic was taunted by his old pal “Doctor Cowboy,” for letting a killer go free.

Meanwhile, Niles did everything he could to stop Dorothy from fighting the Candlemaker, but even she accepted that it was time to grow up and face her (literal) demons. After suiting — er, booting — up, Dorothy conjured a powerful weapon and was pulled into the flames, presumably where she and the Candlemaker will engage in their final battle. (Oh, did we mention that everyone else got encased in wax? Rough stuff.)

Below, executive producer Jeremy Carver looks back on Doom Patrol‘s sophomore season, including the finale that wasn’t technically supposed to a finale. (Damn you, coronavirus!)

TVLINE | The imagery this season was wild: rat babies, sex ghosts, you name it. Was there anything you were especially proud of bringing from script to screen?
Well, since you mentioned the sex ghosts, I’ll say that I was very happy with the way that went from script to screen. From Omar Madha’s direction down, it was an episode that had so many different layers to it. It got to the point where it could — and arguably did — go off the rails and get completely insane, but I was happy with the way it all tied together. In my opinion, it worked. What I like most about doing this show is that from conception on, our writers, crew and cast are taking a lot of risks. We often ask ourselves, “How are we going to pull this off?” And not just from a technical standpoint, but also from a story standpoint. We never want anything to be too absurd. Grounded absurdity is really what we’re going for, and the different ways we approach achieving that are always satisfying.

TVLINE | I do love that we still occasionally see the sex ghosts around the house.
What I call the tendrils of different things we introduce over the episodes are one of the most enjoyable things about the show. We can keep calling back to these things that we plant in the show. If we’re going to cut away to an empty house, why not have some sex ghosts necking in the background?

TVLINE | “Necking” is a tasteful way of putting it.
[Laughs] Yes. 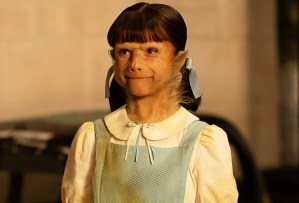 TVLINE | This season also introduced us to Abigail Shapiro, someone I immediately cared about and was invested in. What do you feel she brought to the show?
What Abigail brought to the show was nothing less than extraordinary. From the moment she appeared on screen, she held her own and more against the already impressive roster of talent that we had. It was breathtaking to behold. She brings so much humanity to that character. For me, and I think a lot of people, it’s impossible to take your eyes off her. We were incredibly fortunate to have Abigail join us this season. We were trying very hard in Season 2 to find some distinction from Season 1, to take the same characters and look at them a different way. Abigail brought that freshness and perspective that we needed, alongside all of the other wonderful additions.

TVLINE | OK, let’s talk about the finale. I’m correct that there was supposed to be one more episode, were production not shut down by the pandemic?
Yes. We knew we were facing a potential shutdown [while working on Episode 9], so we were able to do a bit of a pivot and make sure that Episode 9 would be just as satisfying of a conclusion to the season as if we had moved on to Episode 10. There were probably a few more loose ends than there would have been if we’d gone all the way through Episode 10, but we were very happy with how we were able to structure it to give us a satisfying end to the season.

TVLINE | I mean, Dorothy heading into her final battle while everyone else is encased in wax is a pretty epic cliffhanger.
It was a fortuitous stroke of luck that we planned it that way. It worked out well.

TVLINE | What magic did you work to make this feel like a real finale?
We made some changes on the fly. Even in the last few days of production, there was a little bit of triage as we decided what we wanted to add to make things work. We did a little bit of work in post as well, but we were probably more fortunate than [many other shows affected] in that Episode 9 was intended to be a cliffhanger anyway.

TVLINE | Let’s “pretend” I’m a total idiot for a second. How would you describe Jane’s state when this episode ends?
[Laughs] I’m trying to remember the exact ending. I’ve been in COVID lockdown for so long. I would say that the Underground is in a state of crisis. You have the revelation that the person playing Miranda is actually not Miranda. We have some indication of who it is, but it’s not the entire story. And Jane herself is in the well, discovering these truths while still being underwater. State of crisis is an accurate way of describing Jane, the other personas and the underground.

TVLINE | Would Episode 10 have revealed who she really is?
I’ll say that you’ll get a better understanding of who that identity is as we move into a new season, should we be lucky enough to get a new season.

TVLINE | I think I speak for every fan when I say that we already wanted a third season, but now we need one.
Oh, we all do. No one likes to have unanswered questions. I think there’s enough there that people can go away with some satisfaction. There’s a little more we want to say about this, and should we get the opportunity, we’ll be saying it. I could play coy and say that what you see is what you get, but I’ll be honest with you and the fans. There’s a little more there to deal with, and we’d really love the opportunity to do it.

Your thoughts on Doom Patrol‘s makeshift finale? Grade it (and the season) in our polls below, then drop a comment with your full review.