The Impractical Jokers crew has much to celebrate. In addition to resuming production on Season 9 later this month, truTV has announced that it has ordered 10 additional episodes of quarantine offshoot Impractical Jokers: Dinner Party, expanding its run to 18 episodes. 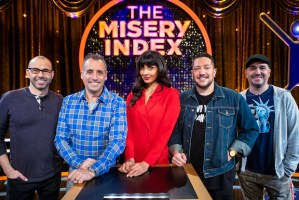 What’s more, sister network TBS has renewed The Misery Index for Season 3. The Jameela Jamil-hosted game show, which features Joe Gatto, James “Murr” Murray, Brian “Q” Quinn and Sal Vulcano — aka The Tenderloins troupe — as panelists, will go back into production this fall. The second half of Season 2, which has already been filmed, will premiere in October.

Last but not least, Impractical Jokers: The Movie, which hit theaters way, way back  on Feb. 21, will be available to stream on HBO Max as of Tuesday, Sept. 1.

“The Impractical Jokers franchise continues to deliver each and every time,” TNT, TBS and truTV GM Brett Weitz said in a statement. “The plan is continue to grow their business from an incredibly solid foundation and deliver to a passionate fan base that’s second to none.”

Added the Tenderloins, “We’re excited to continue growing the Impractical Jokers franchise with WarnerMedia. We’re excited to use the word franchise. Each new project or season, we are pushing ourselves to make it bigger, better and funnier than the last. Thanks to our insanely loyal fans over the past year, we’ve really been able to stretch ourselves and have had a blast bringing projects to life, including our first feature film and a TV show filmed from our separate homes.”

Are you a fan of the Impractical Jokers franchise?