This week on Marvel’s Agents of S.H.I.E.L.D., Coulson & Co. endeavoured to outthink Sybil-guided Malick and his minions, while a trip inside Jemma’s mind did very little to soothe frazzled Fitz fans!

As Malick leads the hijacked Zephyr to outer space, Daisy blames herself for not quaking the peach-fuzzed pest to dust when she had the chance. She turns her attention to Kora, vibing her sister up against a wall while demanding to know the plan for Jemma. After Mack orders Daisy to stand down, Kora claims that she is “here to help,” that she wants to be a SHIELD agent. Met by gobs of skepticism, Kora insists that Malick’s goal is to use the knowledge of history in order to reduce suffering. But… what about Mack’s poor parents? Kora says they served as “proof” that this is a new timeline, that it’s a “brand new day” and the timeline the agents have been fighting to preserve is lonnng gone. As such, Kora proposes that SHIELD make this new universe the best it can be — by killing. More specifically, by killing 30 people whose names are on Malick’s list, and in doing so allegedly save “thousands of lives.”

After Mack makes clear that his team is no “death squad,” Daisy pulls her newfound sis aside for a chat. “We’re not morons,” she tells Kora, who in turn tries to play the “bloodline” card by saying that if Daisy believes in SHIELD, she wants to as well! The topic of their mother comes up — namely, how Jiaying stuck by Kora — leading Kora to say, “I’m sorry you didn’t get that,” to which Daisy zings, “I’m sorry you threw it away.” When Kora offers up that Sybil said “there is no future where Daisy lets her sister fight alone,” Daisy scoffs and bolts. Later, Sousa sees that she has “suited up” for a mission, and while Daisy at first waves off his desire to help, she has a change of mind when she surmises that asking Sousa to abandon a post/go rogue is the sort of unpredictable act they need to outwit Sybil. Oh, and as for Kora’s message from the seer? “I already have a sister to save,” Daisy tells Sousa. “Her name is Jemma Simmons.” 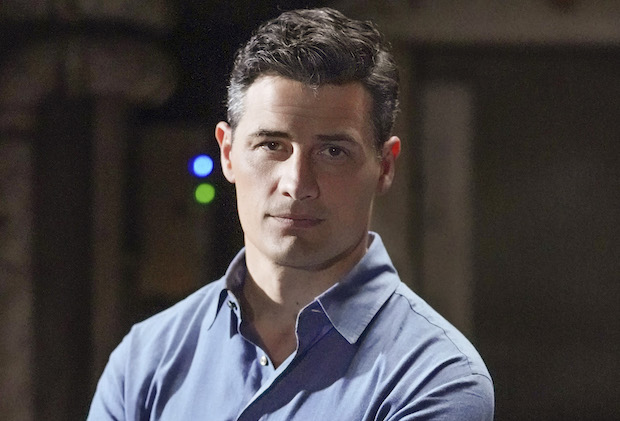 While Sousa rides shotgun as Daisy first-time (!) pilots the Quinjet on a “100,000-mile Hail Mary” (made possible by Mack also unpredictably breaking rules), we see Deke aboard the Zephyr, stealthily skulking around his own Nakatomi Plaza. Well, maybe not that stealthily, since John Garrett soon gets the drop on him. As such, when Jemma is simply unable to tell Malick where Fitz is, he calls for “the grandson” to be dragged in for a beating. When that accomplishes nothing, Malick spies “Diana” pulsing in the back of Jemma’s neck, and realizes what he must do — after KOing Deke with a quake. 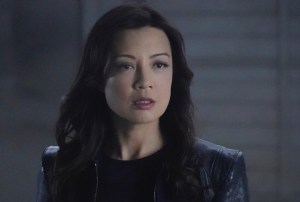 May approaches locked-up Kora, who scoffs that she knows the Badass Formerly Known as Cavalry and how she dealt with that young girl years ago. When May invites Kora to demonstrate that she is able to control her wicked power, Kora triggers a blackout at the Lighthouse, allowing Sybil to leap from the electrical grid and into the computer system, where she announces herself with a “HELLO COULSON.”  Sybil types that because Coulson killed her hunters, he and his team should prepare to meet the same fate!

As Daisy, en route to space, wonders with Mack if the “OG timeline” is still out there, she also shares that Enoch said that this will be the team’s last mission together. “Maybe it’s time,” Mack allows, pointing out that telephones do exist for keeping in touch. Daisy, though, refuses to one day think of them as “people who used to work together.” Rather, “You’re my family,” she insists. “I don’t know who I am without you guys.” Mack, though, counters, “You know exactly who you are.” When Mack picks up on the closeness that has developed between Daisy and Sousa, he smiles, saying that Yo-Yo owes him $20.

Growing oh-so-irritable, Malick smashes the device used to extract Diana, after Jemma refuses to operate it. Instead, he has himself and Jemma thrown into the Chronicoms’ minds-melding chamber, where the first memory he lays witness to is Enoch late last season warning Jemma and Fitz that to save the others, they’d have to do “the hardest thing you’ve ever done.” The next, new flashback shows Jemma talking to Enoch and Fitz about racing to the temple, once they have licked time travel. But as Fitz notes, if they do have all the time in the world to do so, maybe they can pause to live first, without a mission. “Is this about the blood work?” asks Jemma, to which Fitz says, “No. And yeah.” But more to his point, they deserve a respite from end-of-world scenarios. Next up, Malick witnesses FitzSimmons debating the use of the “Diana” implant. “You can’t ask me to do this! Saying goodbye is hard enough! I will feel the guilt inside, the guilt for having left, a part of me being torn away…,” Jemma wails. “I don’t want to forget! I don’t want to forget! I don’t want to forget!” Coming out of that unhelpful memory, Malick stomps away from the chamber, after which Deke asks Jemma if they found Fitz.

While the computer code-proficient Coulson does his best to slow down Sybil, it falls on May, unpredictably, to take over “Coulson duty” and have a heart-to-heart with Kora, to “see how good she can be.” Just then, Sybil unlocks the cell where Malick’s henchmen are being held, and Yo-Yo barely eludes being gutted by one. “These are the lives Malick is saving. Hit men,” May points out to Kora. “Stop selling chaos and tearing us from the timeline we need to restore.” Kora zaps Yo-Yo’s would-be killer, thinking she is proving some loyalty, and then reveals the first name on the list of 30 that Malick deems worthy kills: GRANT WARD. Couson notes the future SHIELD agent/HYDRA plant/Etcetera is but a child right now, but Kora brings up the Cavalry/kid-killing thing again as a counterpoint. She also dangles the idea that in this new timeline, Andrew, Rosalind Price (deep cut!) and Lincoln could be back in their lives. Tired of playing games, May offers to bring Kora to her mother!

Meanwhile, on a much lighter note, Mack privately grills Sousa on the Daisy sitch, making sure that his intentions are good, given how Daisy has been hurt, lots and badly, before. “She’s into you,” Mack shares, “and when she figures that out, watch out.” Mack admits he’s happy with Daisy’s pick, and when he warns Sousa again not to hurt her, Sousa says he feels sufficiently threatened! Not by me, Mack defers, but “every member of this team.” Mack chuckles at the idea of a “man out of time and Quake” getting together, and Sousa finds Daisy’s nickname to be hilarious — which he makes clear later, when he repeatedly and amusingly/sweetly uses it over and over while talking to her.

May tells Kora she is about to deliver something “no one has given you in a long time — the truth,” by bringing her to Jiaying’s lifeless body. Kora insists that since her mother has the power to heal, she just needs a power boost, but her efforts come up empty; Jiaying’s neck is shattered. May makes clear that Malick did this, that Jiaying died protecting Daisy from him. Deep in denial, Kora lashes out at May and the ladies get into a fight, during which the latter at one point ducks a blast from the former. In the immediate wake of the near-miss, Garrett pops up to teleport Kora  to the Zephyr.

Working the computers, Coulson calls up the last thing Sybil accessed — a list of SHIELD bases. It then dawns on them that Malick didn’t head to space to hide, but await the arrival of a fleet of modified Chronicom ships! And on Malick’s orders, they rain laser cannons on Earth, each taking out a SHIELD HQ, the Triskelion included. (Sorry, Kevin Feige!)

In the “bonus” scene, Malick thanks Kora for everything she did to help him give people “new life” by ending so, so many others. He then pulls her into a kiss no one wanted to see.

What did you think of “Brand New Day” and how it set up next week’s two-hour series finale?