This recap contains spoilers from Episode 12 of DC’s Stargirl (which premieres new episodes Monday on DC Universe and Tuesday on The CW).

This week on DC’s Stargirl, things came to a head as the launch of Project New America ticked ever closer. As Part 1 of the first season finale drew to a close, what incredibly unlikely face-off took place?

With 11-1/2 hours left on the countdown clock, we hear Henry Sr. spell out the plan to fire up Dr. Ito’s machine, while the Gambler blinds the Pentagon and leads them to ultimately blame Moscow. Once the brainwashing of millions is complete, he assures Jordan, those people will “think like us…. Fight for us, if need be,” seeing as the rest of the country won’t take kindly to the flyover states’ secession.

Over at the Whitmore-Dugan home, Courtney and Barbara race to pack (with the former even getting her mom’s OK to bring the Cosmic Staff), while Mike quizzes his dad at the auto shop about who takes their kids out of school in November, for a “camping trip”?? Pat tries to build up to some serious truth-telling, but when Mike is too fixated on Chekhov’s Power Drill, he blares at his kid: “Put that down and listen to me!” Mike declares himself tired of being treated like a little kid and stomps away. Pat then gets a creepy visit from a bat-wielding Crusher, who admits that his low-key gym buddy “shocked the hell right out of me,” being the pilot of a giant superhero robot and all. Pat reaches for a nearby crow bar while telling Crusher, “Relax. You’ve got it all wrong.”

Things are just as dicey for Barb back home, seeing as arrows from Tigress’ crossbow have suddenly started zipping just past her! Tigress chases Barbara around the house and knocks her around, until at one point the Cosmic Staff shows up to tackle the villainess. Courtney then arrives on the scene and clobbers Tigress with her tool. Meanwhile at the auto shop, Crusher invites Pat to go “old school” and join him in a fistfight, where Pat gets in a few first jabs. Crusher, though, begins brandishing his superior strength and lobs Pat around the place, before slamming him with a door again and again. Crusher delivers a series of brutal blows on a pinned-down Pat, until Mike shows up behind him, grinding the power drill into his lower back! Pat then grabs one of S.T..R.I.P.E.’s giant socket wrenches and clocks Crusher good. In the aftermath, Mike marvels that his dad’s robotic creation is “badass!” Back at the house, Court continues to clash with Tigress, though Barb pitches in a bit with a well-wielded piece of pottery. When Courtney zaps Tigress through a glass patio door, Barb can only remark of her daughter’s prowess, “That was amazing!”

Over at the Mahkent home, Jordan’s folks scoff that Barbara was never good wife material, and then they urge him to loop Cameron in on the family secret. Jordan, though, is distracted by a phone call with bad news (presumably) about Sportsmaster and Tigress whiffing on their hits, so he alerts Principal Bowin. After teaching her son Isaac a lesson about using musical instruments to (violently) silence bullies, she shows up at Crusher and Paula’s place to make sure they dont fail a second time, by using her own power to immobilize their prey. But when Bowing goes a step too far and calls the marrieds “unfit parents” to “wild animal” Artemis, Paula matter-of-factly fells their colleague with an arrow. They then head out to join the rest of the ISA, leaving Bowin’s violin case behind…. 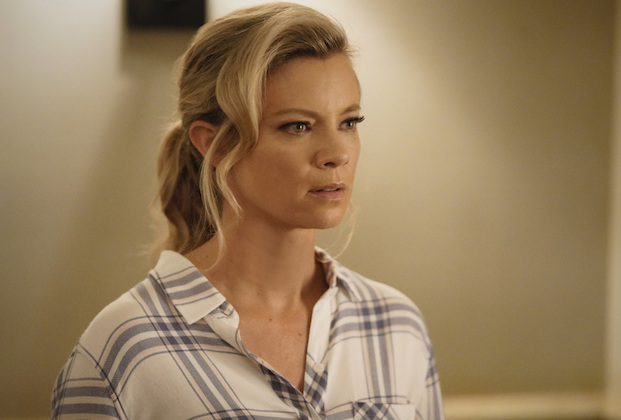 Courtney and her family meet up with the rest of the JSA (and KFC-toting Justin, too!) at a quite remarkable, palatial and gorgeously light-scaped “cabin in the woods.” Meanwhile in the ISA lair, Cindy begs Henry Sr. to let her out of her cell. Sr., though, blames Cindy for his son’s death, saying that if she had been better at keeping tabs on Junior’s powers, he could have been saved. “Instead, I had to end him.” (Cindy rightly counters that she and others were simply trying to pick up the slack while he was “in the hospital in adult diapers.”) Sr. cruelly claims that Cindy’s father sees her as nothing but a “failed experiment,” so no, he won’t be letting her out. Dr. Ito then leads Henry away to his machine, which probably owes Marvel’s Cerebro all kinds of royalties. Upon strapping in Brainwave, Ito warns that there is a chance that his brain will melt and his spinal cord will turn to slush, but they move ahead and voila — the test is a success. Brainwave can hear millions of wretched thoughts out there.

Meanwhile at that fantastic cabin, “Chuck” suspects that Henry Sr.’s power increased with Junior’s death — a report that leads Beth to realize that Yolanda is quietly hurting over her ex’s sacrifice. Rick meanwhile explains to a curious Justin how the ISA killed his parents, probably because his dad had discovered what they were up to — and the secret lies within his journal. Rick though can’t figure out what numerical sequence unlocks the code. Or formula. (Or something.) Outside, Mike has a heart to heart with Courtney, who he says is “so lucky” to have been picked by the Cosmic Staff. Still, he can’t help but wonder what might have happened if he had found it first in the cellar. The answer, though, is clearly zilch, seeing as when Court lets Mike touch the staff, it gives off not even a flicker. But hey, Mike hopes he can someday do something for the JSA, just as his dad built S.T.R.I.P.E.

In the kitchen, Barbara asks a fair question of her husband: Why did Pat never tell her about his past, before they got married? He explains that everyone who was in the know died, including Sylvester’s parents and a contact they had at the FBI. And with that part of his life behind him, “our family was all that mattered to me.” Pat then helps Rick figure out what numerical sequence might have great meaning to his dad, if not an obvious birthdate. When Pat brings up Rex’s beloved Mustang, Rick plugs in the year “1966” and after much furious scribbling, boom, the code is cracked!  “Chuck” scans said formula and it translates into blueprints for the network of tunnels the ISA uses, also showing the giant “synaptic amplifier” they built to transit brainwaves. Analyzing the map, they decide that Courtney and S.T.R.I.P.E. will use the entrance by the river, Rick, Yolanda and Justin will approach from the opposite direction, and Beth will run comms/hopefully shut down the bad guys’ computers from Barbara’s office. (Mike, you get to watch the dog!)

As the teams make their approach, Beth hacks into the ISA computer and finds their manifesto/”New Constitution” for the brainwashing — and it includes such things as… combating global warming? Forcing people to embrace solar and wind power?? Ending discrimination???? And supporting universal health care!!!!  Rick asks Pat if the bad guys are in fact bad, when “Chuck” interrupts to report that the machine only affects “fully developed” (meaning: adult) minds. Also, some 25 million people stand to die from the process if they resist it too hard!

The Gambler then hacks into Beth’s hack and taunts her with the news that the countdown timer isn’t to when the process will start, but when it is complete — meaning, in just 30 minutes, because Brainwave is already hooked up and doing his thing. As a result, the adults start to lapse into trance-like states, starting with Barbara and Justin. As for Pat, well, Brainwave has different plans for him, taking over his mind to turn the mighty S.T.R.I.P.E. into a fighter for the bad guys! So just as Courtney is asking Pat what their next move should be, the robot forms a big ol’ fist and throws it in Stargirl’s direction — as we cut to black.

What did you think of Part 1 of the Season 1 finale?