Kiefer Sutherland is once again battling terrorists, only this time he’s got the wrong guy in his crosshairs.

Quibi’s The Fugitive reboot premiered on Monday (Episodes 1-3 are now available, with new chapters debuting every weekday until its Aug. 18 finale), and while we secretly wish it was Jack Bauer back in action, freshly sprung from Russian captivity, it’s still refreshing to see Sutherland all fired up. (Is referencing 24 here a piece of low-hanging fruit? Sure. But after all, his new character does head up a Counter Terrorist Bureau, so I regret nothing.)

The premise: A bomb blows up a Los Angeles subway, and Sutherland’s Clay Bryce is on the case. The suspect: Mike Ferro, an infamous ex-con with a vehicular manslaughter charge against him that rocked local news. But this time, he’s wrongly accused, on his own and on the run. Here’s a rundown of what happens in the series’ first three “quick bites.”

Episode 1: When we first meet Mike (played by Narcos‘ Boyd Holbrook), he’s giving financial advice to a gentleman looking to make an illegal write-off. He lets it slip that he’s been in prison before, which doesn’t sit well with the client, who asks why a former criminal “from the news a few years ago” is handling his finances. Unsurprisingly, Mike is let go.

Mike meets up with his parole officer, Kevin (iZombie‘s Malcolm Goodwin), who tells him he has to file a change of employment with the DOC. “Trust me, I’m never doing anything that’ll make me go back to prison again,” Mike says. Kevin gives him a pocket watch that his dad gave him when he reached six months sober. Since today marks Mike’s six months of freedom, he passes on the torch. “I’ve been doing this 10 years, working with bad men,” Kevin tells him. “Michelangelo Ferro is not one of them.”

We learn from Mike’s wife, Allison, that he was in the slammer for three years, and because of his absence, there’s distance between him and his young daughter, Pearl. The next day, we see this distance in action via her cold body language. “You left us,” she tells her pop, which isn’t quite true. (Mike took a plea to avoid draining his family of everything they have. Lawyers are expensive, kid!) After dropping Pearl at school, he hops a subway with Kevin, and immediately after he exits the train, it explodes!

Episode 2: Mike wakes up on the ground and immediately pieces together what happened. He also discovers that Kevin is dead. Help arrives at the scene, but none of the bodies littering the ground are moving. 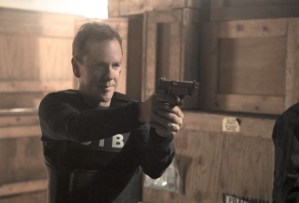 We cut to Detective Clay Bryce as he’s filling his staff in with the bombing details. Bryce fears it might not be the only attack. He dishes out orders to his crew and retreats to his office, when one of his agents, Detective Sloan Womack, comes to check on him. She’s worried because Bryce’s wife was killed in the September 11 attacks. He tells her it’s “none of your f–king business,” and she doesn’t press the issue.

Reporter Pritti (The Good Place‘s Tiya Sircar) talks to a source at the L.A. Transit Authority, who confirms that footage of the attack exists. After promising not to record it, the source shows her the clips. Bryce and his team also review the footage, and they see Mike carrying a knapsack in one frame, only to realize the bag disappears seconds later. At the same time, Pritti and Bryce both declare: That’s Mike Ferro! Whatever Mike was arrested for must’ve been huge news.

Episode 3: As Bryce’s crew works diligently to uncover info on Ferro, Pritti uses fake tears to convince an officer to let her search for “her husband” among the dead bodies. Obtaining access, she finds Kevin among the deceased — aka the last guy seen with Mike before the big boom. She checks the tag on his body and grabs his full name. Now, she can really start digging.

Bryce learns that Mike’s phone was destroyed in the explosion, but an agent is able to recover the last text he sent: “Kill It All,” as in Allison, his wife, who’s traveling on a work trip. In Chicago, the FBI catches up with Allison and puts her in cuffs.

Pritti and an intern discover that Kevin was reporting Mike’s job status change. “That’s motive. The guy gets canned, asks his P.O. for leniency, instead Lawson reports him and Ferro snaps,” she deduces.

Meanwhile, Bryce tells his team that no one is to leak the name “Mike Ferro” to the press, but little does he know Pritti already has itchy Twitter fingers. As she’s typing, we see a news report that tells us Mike was convicted of vehicular manslaughter following an accident that killed his brother and the mayor’s nanny. He was drunk driving with a blood-alcohol level twice the legal limit. In another instance of bad luck, the report airs at the hospital Mike is standing in. A police officer sees him and tells him not to move.

And that’s when the chase begins…

What did you think of The Fugitive‘s first three episodes? Excited for more? Grade the series so far, then let us know your thoughts in the Comments below!