Warning: The following contains spoilers for Sunday’s Yellowstone. If you’d rather watch first, read later, saddle up and ride on outta here.

At this point, Yellowstone’s Jamie should really just wear protective gear 24/7. Whether he deserves all of the abuse that’s heaped upon him — and, more often than not, he does — the guy just takes one blow after another. In Sunday’s episode, he gained a terrible new insight into why he was, as Beth so recently reminded him, evil incarnate. She, in turn, took two major steps toward making the road she travels in life a happy trail. What, exactly, did she do? And what did Jamie find out? Keep reading… 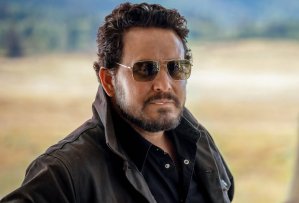 ‘COOL S–T AINT CHEAP AND CHEAP S–T AIN’T COOL’ | As “The Beating” began, a bunch of cows and calves were stolen from the Duttons, which immediately turned Kayce into a Stetson-wearing Hardy Boy. When the denim-clad detective subsequently laid eyeballs on a suspicious character at the sale barn in Billings, said suspicious character tried to drive away, only to have Kayce give chase on horseback (!) and lasso him around the neck (!!). Once Kayce had the name of the rustler for whom this baddie worked, he, Ryan and Agent Hendon went to apprehend him and wound up in a shootout that left the villain dead, his little girl scarred for life and the supporting players injured and bloody. And that was all just a subplot!

Back at the ranch, Rip was ticked to discover that the bunk house was one woman away from devolving into girl talk and pillow fights. Et tu, Lloyd? Hey, replied Grandpa. Laramie’s “old enough to vote and buy bullets.” And she and Mia weren’t hangers-on, they were willing to work. The latter went so far as to insist on accompanying a still-recovering Jimmy and Rip to sell a horse that couldn’t be broken. Mind you, what she mostly worked was Rip’s nerves, yammering on like the truck would explode if she stopped talking. “When we get back to the ranch,” Rip grumbled to Jimmy, “I’m gonna kill you with my bare f–king hands.” Before that, however, he showed the would-be rodeo star a kid half his age and twice the rider — and pointed out that, despite how good the youngster was, he could still die. Rip wasn’t telling Jimmy not to return to the rodeo, though. This, he said, was just “my way of showing you why you shouldn’t.” 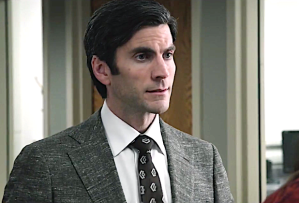 ‘YOU DIDN’T TELL ME YOU WERE ADOPTED’ | At the main house, John asked Beth if she was going to marry Rip. “Maybe,” she said. [Beat] “If he asks me.” [Beat] “Yes.” If she was waiting for that to happen, it was never gonna, said her dad. Rip would never ask him for her hand in marriage, and he’d never ask Beth if he hadn’t asked John first. So, he suggested, Beth was going to have to ask Rip herself. In response, she asked if Rip could have her hand. Of course, he could. “Happy’s all I’ve ever wanted for you, sweetheart. You give him your hand if he gives you that.” Thus concludes the most uses of the word “hand” in a single paragraph in history. Meanwhile, Jamie was distracted from his inquiry into John’s power of attorney — hmm — by his secretary informing him that the election committee needed a certified copy of his birth certificate, stat.

So, off Jamie went to another office in the building, only to have his life changed in an instant. The clerk — and the paperwork she produced — revealed that he’d been adopted by the Duttons when he was just three months old. What’s more, his biodad, Garrett Randall, had gone to prison for the second-degree murder of Jamie’s biomom! “Who the f–k are you?” Jamie asked himself afterwards. Understandably, he was shook. Elsewhere, Beth met with Angela for what, it seems, is her favorite kind of get-together: short and nebulous. “You have a tiger by the tail with” Willa, Angela warned. Well, duh. “To win” against Market Equities, she added, “we’re gonna have to get dirty.” Well, duh: the sequel. Mind you, Beth wasn’t fazed. She didn’t have to get dirty, “I stay dirty,” she said. So, uh, good meeting. Very substantive.

‘ANYTIME YOU WANNA RASSLE A BEAR INSTEAD OF A CUB, PICK THE BARN, I’LL MEET YOU BEHIND IT’ | Later, John was trying to enjoy a relaxing lunch at a diner when he wound up bumping into Wade and his henchman/son. We still didn’t find out why they so dislike one another, but we did glean some valuable intel after John deflected the younger man’s attempt to defend his dad from a verbal assault with a physical one. Apparently, despite the fact that once upon a time John had given Wade a job and a home, the rapscallion had stolen the one thing a cowboy doesn’t steal. (BTW, he wanted whatever that was back.) Also, Wade had been hired to do a job. (By Roarke maybe? Was that job mainly to annoy John? If so, Wade was killing it!) When Rip got home from his day from hell, Beth made it a whole lot better by presenting him with a simple ring. “I didn’t think you were a diamonds and gold kinda girl,” she joked. But seriously, “I don’t need presents,” he said, “just you.” Ah, but “that’s what it means. It means that you have me, I’m yours. It means ‘Come live your life with me.’”

Needless to say, Rip accepted Beth’s proposal once he learned that John had given his OK. The one problem? They couldn’t legally tie the knot since, on paper, Rip didn’t exist. Didn’t matter to Beth one bit. She wanted to symbolically get married in the mountains in front of family and friends. Well, “I don’t have any friends, but should I make one… ” And that was that. It was settled! As day gave way to night, Jamie found John in the living room. “You always preached the truth,” said Jamie. “You said it’s all a man has, his word. Judge him by nothing else. Are there different rules for judging you?” But John wasn’t about to apologize for raising Jamie and keeping his awful birthright a secret. Hell, earning the right to call him son was, in his estimation, “the hardest thing I’ve ever done.” Now Jamie could choose, though. He could find his lowlife biological dad, “look into his rotten heart and choose who you call father.” Oh, Jamie. Choose wisely. What did you think of “The Beating”? Were you as surprised as Jamie to find out he was adopted? And how freaking perfect are Rip and Beth? That’s a wedding I want to attend!