The following contains major spoilers from the Aug. 2 episode of Syfy’s Wynonna Earp.

Wynonna Earp this week located Waverly and Doc and escaped the Garden of Eden, but life proved to be thorny in a different and most unexpected way upon the trio’s return to Purgatory.

Coming out of the season premiere, Waverly herself laid eyes on a buck-naked Nicole inside the Garden, only to eventually realize that she and Doc were actually dealing with a manipulative, shape-shifting Eve, who was plotting to use then to finagle her escape. The real Nicole, meanwhile, was nursing a very busted leg after her tumble inside the zombified scientist-infected BBD lab. As such, she had to stay behind, in Rachel Valdez’s care, as Wynonna leaped into the interdimensional portal that Dr. Gloria Valdez had created then died trying to keep shut. Wynonna landed at the Garden’s arctic topside, where both she and Doc fell prey to more of Eve’s shape-shifting hijinx.

After Doc drop-kicked Eve into a portal and Wynonna convinced Waverly not to spend eternity on her father’s throne protecting the Garden, the trio found/used another portal and each landed in a different spot in Purgatory. Waverly found the true Nicole and enjoyed a passionate reunion, while Wynonna and Doc came to witness that all is not well in their hometown. We and Waverly then learned from Nicole just how long the gang’s brief visit to the Garden actually lasted — 18 months, three weeks and four days!

TVLine jumped on the phone with showrunner Emily Andras to talk about the time jump, the “new” Purgatory and giving “WayHaught” fans some well-earned romance.

TVLINE | So Wynonna, Doc and Waverly just made their way back to Purgatory, and Waverly reunited with Nicole—
Did she ever!

TVLINE | —only to later realize that more than 18 months passed while she was in the Garden. How do you decide what is long enough, and how much would have been too long a period of time?
I think we wanted it to be long enough to realize that the characters will have changed, and we will be really intrigued by what the ones who have been left behind have been through, what they’ve had to do to survive, how they coped without their friends. But at the same time, we didn’t want it to start feeling like a May-December romance. Like, 40 years probably would have been too much.

TVLINE | Even three, you’d be like, “Aww, man, Nicole went three years without Waverly? That’s sad.”
Yeah. I feel like we wanted to be mean, but like Wynonna Earp-mean. You understand it, but you’re not devastated. Anything over a year, I feel like that’s when people start to get really weird, if people I loved were gone for over a year. There’s something about 18 months — you understand that for the people left behind, they would have started to wonder if this was their new reality and they had to make a new go at their lives. 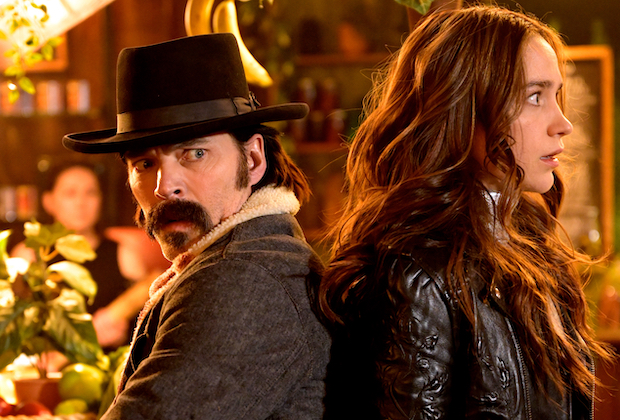 TVLINE | Let’s talk about this new reality. Wynonna and Doc got at least one visual hint about what’s going on. How would you sum up what all has changed?
I would say that Purgatory is back to a traditional Western town. When you think about Deadwood or a spaghetti Western, you think about how the laws work a bit differently, how it’s a bit more ruthless. We see bodies hanging in the streets of downtown Purgatory. There’s a sense that without Wynonna as the whiskey-soaked, I-guess-“cop” in town, things have maybe gone a little darker, a little grittier. Law and order and justice mean something different now in Purgatory.

TVLINE | “Once.”
[Laughs] Sure, “once.” But hey, man, you go in with the help you’ve got, and that’s who he had, so I don’t know if I would put his odds super-high. To be honest, there’s definitely some trauma and some sadness and some consequences in the next episode, that our characters are really thrust into. What are this gulf of time and space going to mean between loved and friends and family…? Stay tuned.

TVLINE | Are we done with Eve?
I dunno, are you ever done with anything on this show? She got kicked out a door, so I feel like she’s not right up in our grill, but….. You never know! 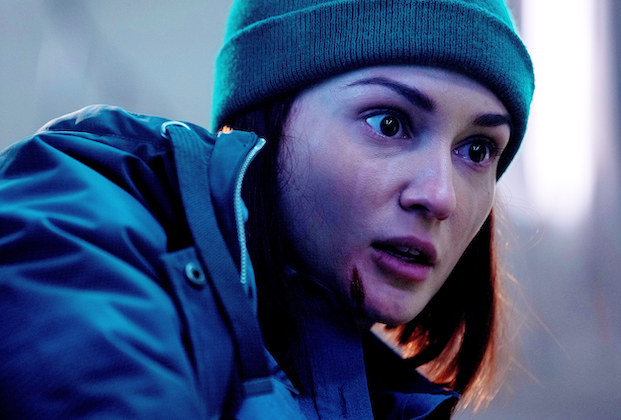 TVLINE | I’ve already seen a couple of fans, working off of not-entirely subtle tweets by some of the people who saw screeners, worrying that it’s not really Nicole that Waverly reunited with. Are you able to set the record straight that it’s definitely Nicole?
Yes, definitely. I would definitely want that, especially with issues of consent. I promise that it was consensual and beautiful and you can enjoy it. I would say you don’t have to worry about Eve right now, for sure. Plus, I trust Waverly’s judgement. She knew the second she kissed Eve in the Garden that it wasnt Nicole, she just knew.

TVLINE | Lastly, talk about that WayHaught love scene. There is admittedly much LGBTQ content out there that I have never seen, but it seemed to be pretty significant in the scheme of things.
I would like to think so. I certainly think there were some incredible, brave shows and souls that paved the way, and I was lucky enough to be on Lost Girl, which had a bisexual lead and we did all sorts of things as far as sex scenes. But I am extraordinarily proud of that [WayHaught] scene, and I feel like it’s so earned four seasons in — for the characters, but also for the fandom. What a celebration! What a hungry, passionate, desperate, telling, sensual and romantic reunion for a queer couple, for a female-female couple! It speaks to the trust that Dominique [Provost-Chalkley] and Kat [Barrell] have with us. It was all very carefully choreographed and discussed, but it’s so important to everyone involved to get it right.

I do think it’s something you see with heterosexual couples a little more often, to say the least.

TVLINE | With queer couples, you get a kiss but there’s always, like, a hand in the way—
[Laughs] Or it’s badly lit. I was watching the lighting on this like a hawk, because a common, hilarious complaint of LGBTQ fans is, “I think they kissed… or they were sharing a sandwich.”

TVLINE | Or, “Look, a flood light is suddenly mounted behind them blowing everything out!”
Exactly. We really were all quite determined that we were going to take it as far as we could. And to Syfy’s credit, they were so immensely supportive. That’s the benefit, too, of being 10 pm cable. And again, Dom and Kat had complete approval of the scene, and they are very comfortable with each other, and with our director…. I just want the LGBTQ Earpers to be able to celebrate it and love it and just really be in the moment. But I also want anyone who’s straight and believes in love to see this beautiful love scene, between two people who are maybe destined to be together. I hope that everybody can enjoy it, whatever your jam is, man.

TVLINE | Does that scene look different in your old time slot?
Yes, I would say so. I would say that scene looks different four years ago. But again, I feel like it speaks to the strides we’ve all made and what is acceptable. And for me personally, I would say that because of the things that are important in my own storytelling and what I have based a lot of my career on pushing for, that is one that I thought was worth fighting for. So I hope anyone notices it. We’ll see!

Want scoop on Wynonna Earp, or for any other show? Email InsideLine@tvline.com and your question may be answered via Matt’s Inside Line.