The following post contains spoilers for Season 2 of The Umbrella Academy, up to and including the finale. If you haven’t finished your binge yet, avert your eyes!

The Umbrella Academy’s Season 2 finale offers the Hargreeves one last chance to get back home — but given what awaits them in 2019, I’m starting to think they should have stayed in the ‘60s, after all. Before you tell us what you thought of the finale, let’s revisit the episode’s highlights:

THIS LITTLE LIGHT OF MINE | First, we’re treated to a flashback from the siblings’ childhood. It’s 2006, and Ben was just killed during the Academy’s latest mission… but, in true Sir Reginald fashion, the man offers no sympathy to his children during the eulogy. Rather, he insists it was their fault that Ben perished while on the mission, and when Vanya tries to say otherwise, Diego dismisses her since she wasn’t even there for Ben’s death.

But after the siblings bicker during the funeral, Klaus goes off on his own and conjures Ben’s spirit for the very first time. Ben isn’t sure he can keep Klaus company for long; there’s a light appearing to him in the afterlife, and he’s being told to go toward it. But Klaus insists that Ben can go into that light whenever he wants, and it doesn’t need to happen right away — so Ben decides to stick around.

TIME AFTER TIME | Meanwhile, in the present day — by which I somehow mean 1963 — JFK’s assassination has now been pinned on the Hargreeves siblings, who are said to be part of a terrorist organization that’s in cahoots with Lee Harvey Oswald. But Vanya can’t stick around for her family’s inevitable showdown with the Commission and/or every law enforcement officer in Dallas: When she tries to call Sissy to check on her, she’s suddenly jolted by a mental image of Harlan, who is struggling with his newfound power over at Sissy’s farm. That’s when Vanya realizes she may have transferred some of her abilities to Harlan when she saved him from drowning, and it dawns on her that she and the boy have been connected ever since the lake incident.

Despite their initial protests, all of Vanya’s siblings join her for the journey to Sissy’s farm. (She also passes along Ben’s final message to Klaus: It wasn’t Klaus’ fault that Ben’s spirit stayed in limbo for so long; Ben had always just been too afraid to go into the light until now. Sob!) Upon arriving at the barn, Vanya manages to convince Sissy — who’s understandably freaked out by the Hargreeves right now — to let her speak with Harlan, and she manages to get Harlan to calm down and stop emanating those violent bursts of light. 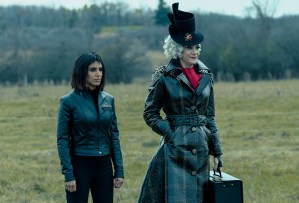 Unfortunately, Sissy’s farm becomes the site of so many other problems for the Hargreeves. First, the Handler and Lila arrive, hoping to kill all the siblings once and for all — and when Diego suggests that the two women are vastly outnumbered by the Academy, the Handler teleports in hundreds and hundreds of Commission agents who all begin firing their guns at Diego and Five. Then, after Vanya sends out an enormous wave of energy that knocks down and kills all of the Commission agents at once, the siblings are stunned to find that 1) the Handler and Lila survived Vanya’s attack, and 2) Lila has the incredible ability to mirror everyone else’s superpowers. Not only can she send out energy waves like Vanya’s, but she also “rumors” Allison and blinks around in time during a fistfight with Five. (As for the Handler, she’s moved on to Harlan, who she’s trying to convince to come with her and learn how to harness his new powers.)

While the siblings regroup and try to figure out how Lila can be stopped, Vanya makes an offhand remark that “if [Lila] can do everything we can do, she might as well be one of us” — and you can practically see the light bulbs popping up over everyone’s heads. And it makes a lot of sense: Sir Reginald kept so many other secrets from his children throughout the years. Why wouldn’t he fail to mention that other superpowered kids were out there, too?

Meanwhile, as Lila and Five continue to fight in the barn, she finally mentions that Five was responsible for killing her parents. He admits to having shot them… but he also shares that the Handler forged the kill order for that particular job, and she accompanied Five on the mission that day, which is rare for Commission executives to do. It wasn’t that the Handler cared about Lila’s parents; she just wanted Lila, the same way she’s trying to recruit Harlan as this whole ordeal is transpiring.

Diego and the other siblings then arrive in the barn, attempting to convince Lila that the Handler has been using her this whole time, and they can serve as Lila’s real family from here on out, if she’ll just stop trying to hurt them. But just when it seems Lila will agree to that, the Handler rushes in and shoots all of the Hargreeves (!) — then she shoots Lila (!!), and then the Handler is unexpectedly offed by the last remaining Swede (!!!), who had been tailing the siblings since the beginning of the episode.

‘SECONDS, NOT DECADES’ | Five, who managed not to be instantly killed by the Handler’s gunshots, suddenly has an epiphany as he looks around at his family’s bodies: He remembers Sir Reginald telling him, just a few days ago, not to use his time travel power so ambitiously. He needs to start small and travel merely seconds in time, not decades. And as that realization dawns on him, Five manages to stand up and travel back in time by just a few minutes, resurrecting all of his siblings as he returns to the moment just before the Handler shot everyone in the barn. 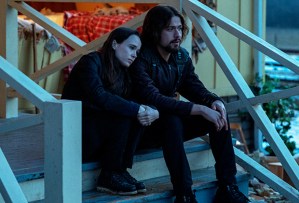 This time, though, Five is able to grab the Handler’s gun before she can do any damage — that is, until the Swede shows up a moment later anyway and still kills the Handler, just as he’d done the first time around. But when the Swede faces Five, seemingly prepared to murder him, too, Five drops his weapon and says, “Enough.” The Swede briefly pauses, then agrees, “Enough,” and sets down his gun before leaving the barn for good. (Well, that was easy. And the Swede is later picked up by Klaus’ cult as their van drives by him, so it’s safe to say he’s starting a completely new chapter.)

Lila, meanwhile, escapes all of this madness via the briefcase that her mother left behind. And over at another corner of the property, Vanya puts her hands on Harlan’s knees and seems to successfully take back the power she had given him. For once, it seems the siblings’ work is finally done — and with all of those dead Commission agents still lying in the grass outside, there’s no shortage of available briefcases that can take the Hargreeves back to 2019. Sissy and Harlan, unfortunately, can’t risk coming to the future with Vanya… but in a later scene, while they’re on the road to California for a fresh start, Harlan is nonchalantly levitating a toy over his hand, unbeknownst to his mother.

And that’s not all: After the siblings return to 2019 — the day after the original apocalypse was supposed to take place — they notice something odd about the Academy. For starters, there’s strangely a portrait of Ben hanging over the fireplace… and while they’re staring at it, Sir Reginald suddenly rises from an armchair. “I knew you’d show up eventually,” he tells the group, who are rightfully flabbergasted that their father is somehow alive.

Even worse, Sir Reginald is puzzled when the siblings insist this is the Umbrella Academy. “This is the Sparrow Academy,” he corrects, as a different group of uniform-wearing teens suddenly appears in the room — and they’re led by Ben, who is very much alive. “Dad, who the hell are these a—holes?” Ben asks, leaving the Hargreeves with only one possible response: “S—t.”

With that, I hand it over to you. What did you think of The Umbrella Academy‘s finale? Cast your votes in our polls below, then hit the comments!