Netflix’s quirky comic book adaptation returned for Season 2 on Friday, picking up right after the superpowered siblings narrowly escaped the end of the world. But as nice as it was for the Hargreeves to avoid incineration at Vanya’s concert, Five accidentally brought them way back in the past — and they’re now scattered throughout a three-year time period in 1960s Dallas. Oops.

Before you give us your thoughts on the premiere, let’s recap where each sibling landed:

FIVE | We’ll start with Number Five, who is actually last to arrive in the 1960s — more specifically, Nov. 25, 1963 — but makes the most progress in this episode as he tries to piece together what happened to his family. When Five first shows up in the past, he gets quite the shock: Not only have all his siblings found their way back to one another, but they’ve all fully embraced their powers, which they’re using to fight back against an army of Soviets that have invaded the United States and begun a catastrophic war.

But just as Five is about to run to his family, he’s stopped by ex-Commission employee Hazel (!), who is now white-haired and much older. After pointing out nuclear bombs that are about to rain down on Dallas, Hazel teleports Five away from the war zone — leaving the other Hargreeves to burn up! — and brings him to the same street, 10 days earlier. There, he confirms that all of Five’s siblings die in the nuclear Holocaust, unless he restores the timeline in the next 10 days and saves them. (In case you’re wondering why Hazel is suddenly helping Five after all this time, he says he’s doing it as a favor to Agnes who, in the future, died of cancer after 20 good years spent with Hazel. Aww.)

Just as Hazel is explaining the situation to Five, though, a trio of white-haired, evil-looking men gets off a bus on that same Dallas street… and, within seconds, starts shooting up the entire block. When they reach the bench where Hazel and Five are chatting, Hazel hurriedly drops something in Five’s jacket pocket and gives him a Commission briefcase — and Five is able to teleport away from the area just as Hazel is shot numerous times. He escapes to a nearby alleyway, where he notices a bunch of photography equipment set up on the roof of an adjacent building.

With the help of his powers, Five is able to get inside the building and confront Elliott, the man who lives there… who’s also totally obsessed with all things extraterrestrial, including the mysterious arrivals of all the Hargreeves siblings over the last three years (which he’s been photographing, hence the cameras). Elliott is able to fill in a lot of blanks for Five: He was there when Klaus was the first sibling to fall into that alley; he watched as Luther made frequent returns to the alley over the years, crying Allison’s name, until he eventually stopped; and, most helpfully, he kept a newspaper clipping that features a mugshot strongly resembling one of the siblings. Sure enough: It’s Diego. 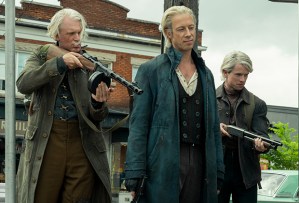 DIEGO | Diego, meanwhile, had been taken to Sept. 1, 1963, when he first arrived in the past — and he immediately made himself useful after crashing into that alleyway by saving a woman who was getting mugged. But two months in the future — around the time of Five’s arrival — Diego is now locked up in a psych ward (with shaggy hair!), seemingly obsessed with stopping JFK’s forthcoming assassination, which absolutely no one is convinced will really happen. (In fact, when Diego was arrested a few months back, he was caught outside Lee Harvey Oswald’s house with multiple knives.)

During his stay at the facility, Diego is shocked to get a visit from Five, who informs him that a new apocalypse has followed them to the ‘60s, and they only have 10 days to stop it. But when Diego counters that he’ll only help Five after Five lets him save JFK, Five gets annoyed, and he blabs to the guards that Diego has been hatching an escape plan by shaving down the bars of his cell. Within seconds, the guards grab Diego and sedate him, and Five whispers to Diego that he’ll be back for his brother soon.

When Diego wakes up later, he’s alone in a padded room, wearing a straitjacket… which he dislocates his shoulder (gah!) to wriggle out of, then picks the lock on his cell door with an object he’d swiped from his therapist’s jacket pocket. But his escape from the psych ward is interrupted by the arrival of those same white-haired men who gunned down Hazel earlier. For now, it’s unclear what their motive is, but they show up at the facility and immediately kill a security guard. Meanwhile, Diego gets caught by an orderly who threatens to break Diego’s jaw for his backtalk, then he is hit over the head by Lila, a fellow psych ward patient who has struck up a friendship with Diego during their stay. As they make their way out of the facility, Diego and Lila run into the white-haired trio and narrowly escape their gunfire; when all is said and done, not only do Diego and Lila successfully elude the men and break free from the psych ward, but dozens of other patients manage to flee the facility, too.

KLAUS & BEN | Meanwhile, Klaus and Ben are the first to arrive in the ‘60s, but we don’t see much of them during the premiere. After the brothers discover they’re in 1960, we next catch up with them in 1963, where they’re driving on a long, empty highway. It’s revealed that they were spending some time in San Francisco recently, apparently doing some important work with the community — “They need you in San Francisco!” Ben urges Klaus — but Klaus is now taking them back to Dallas, despite Ben’s insistence that he has “unfinished business” on the West Coast.

During the drive, their car breaks down, and the brothers are forced to travel on foot until they reach a bar. A group of men — who don’t look the least bit friendly — ask Klaus if he wants to play poker with them while waiting for the next bus to Dallas, and the jackpot quickly grows to include all of Klaus’ money, a necklace he’s been wearing and the keys to one man’s pickup truck. But since Ben is currently miffed at Klaus for dragging him back to Dallas, he chooses not to help Klaus win the poker game — and when Klaus realizes he has a losing hand, he swipes the man’s truck keys anyway and manages to drive off in it before the men can chase him down. (It’s a short-lived joyride, though: Later that night, Klaus is pulled over and arrested for stealing the vehicle.)

ALLISON | Allison arrives in 1961… and when she enters a nearby diner to ask for help, she’s shocked at the “Whites Only” sign hanging above the counter. But when we see her again in 1963, she seems to have found a rhythm in Dallas. She works at a salon, she’s married to a civil rights activist named Raymond Chestnut, and she seems to be getting involved in the social justice work herself. (Best of all, she can speak again!)

One night, while Allison, Raymond and their fellow activists are gathered at the salon to plan an upcoming sit-in, a white man knocks on the door, prying about why the group is having such a late meeting. When Raymond politely asks the man to leave, he accidentally shuts the salon door on the man’s foot — and just when it seems the man will punch Raymond for doing so, Allison steps in and quite literally kicks the man out the door. Onlookers seem impressed, and the man walks away, but the look he gives Allison seems to indicate he won’t forget this incident anytime soon. 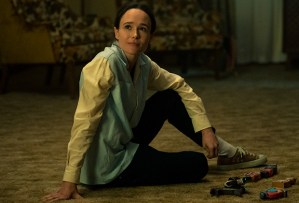 VANYA | She Who Created the Apocalypse is beamed down to October 1963 — and the second she steps out onto that Dallas street, she’s immediately hit by a car. “Son of a biscuit,” sighs the driver, who is accompanied by her young son.

As it turns out, the accident has wiped all of Vanya’s memories. She seems to recall her own name, but nothing about her family, her powers or the end of the world. Plus, when the action jumps forward by a month, we find that she’s been taken in by Sissy, the woman who hit her, and she now serves as a nanny to Sissy’s son, Harlan, who seems to struggle with nonverbal autism. Along with Sissy’s husband, Carl, they all live on a farm somewhere in Dallas, and Vanya actually seems… happy?

LUTHER | Last but not least, there’s Luther, who is transported to 1962. Upon arriving in that Dallas alley (the Dalley, if you will), he screams Allison’s name multiple names, but no dice. When we see him in 1963, though, Luther has found a job as an underground fighter; his boss, Jack Ruby, also owns a local strip club where Luther serves as a bouncer.

It’s at that strip club where Luther gets a visit from Five at the end of the hour. Five seems to regret the botched time-travel plan that helped them escape the apocalypse, and he empathizes with the loneliness and fear that Luther has been feeling for the last year in Dallas. But right now, Five needs Luther’s help wrangling the other siblings, because the world is going to end (again) in 10 days. Luther’s response, however, isn’t exactly ideal: “I don’t give a s—t.”

OK, your turn! What did you think of The Umbrella Academy‘s sophomore debut? Grade it in our poll below, then drop a comment with your full reviews!