You know it had to be a momentous episode of Greenleaf if Lady Mae confessed to her family that Grace was illegitimate, Phil reunited with his long-estranged father, and Jacob and Kerissa were actually nice to one another — and still, none of that was the biggest thing that happened. What was? Read on… 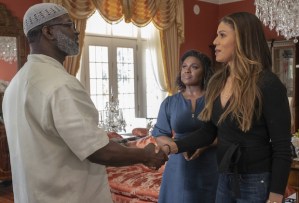 ‘IS THIS WHAT A SAINT’S LIFE LOOKS LIKE?’ | After learning from Agent Dulles that Rochelle was no longer a person of interest to the FBI, Bishop blew off his doctor’s appointment — any excuse with that man! — to head to the site of the new church. Meanwhile, Lady Mae sat down and gave “a fair hearing” to Tara, who insisted that she hadn’t known Rochelle was back. What’s more, now that Tara had seen the estate, she was more convinced than ever that God wanted something good to be done with it. Did she think that Rochelle would go along with that? Yeah, er, no. At least on that point, the women could agree. Speaking of Tara’s twisted sister, while Bishop was meeting with the city inspector at the club, Rochelle stopped by — mainly, it seemed, to rebrand him a liar and taunt him. (Which was OK by me — she’s an excellent taunter.) “Success,” she purred, “is the evidence of holy favor, and you look highly out of favor,” what with having been kicked out of Calvary and, next, the mansion. When finally Bishop snapped, she turned colder than my air conditioner seems able to make it anymore. “Basie,” she said, “shoulda killed you when he had the chance.”

Meanwhile, the “What did Bob do?” plot thickened like an extra rich gumbo. After Darius reported to Grace that his phone and laptop had been stolen from his Las Vegas hotel room, he asked her to see if she had photos of the Eden Vale Lending escrow accounts in her email. She did, she discovered. And then, a second later, she didn’t — they were literally deleted before her eyes. But things were still looking up for the investigation: At Charity’s behest, Yusef showed up in town to offer Darius “what you call deep background,” not on-the-record intel about Eden Vale. (Charity even got a “nice work” outta Gigi — a miracle in and of itself!) So what was the deal? Turns out, in the ‘80s, Bob owned a mortgage company that sold second mortgages to people who needed cash — in particular, Black people — then when they couldn’t make their balloon payments, stole their houses out from under them. That’s why Bob has been working so hard to take over Calvary — “to look like a friend to the Black church” ahead of his Senate run. 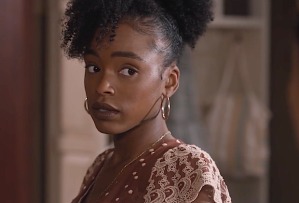 ‘AS IF! DADDY LOVES BLACK PEOPLE!’ | What did Phil’s mother have to do with all that? She was the friendly face who showed up at people’s doors, Yusef explained, and made them think that Eden Vale was all about Black people helping Black people. As the meeting concluded, Yusef still refused to go on the record — unless someone else from back then would, too; then he’d corroborate. He also gave in to Charity, agreeing to tell Phil what his mother had done. Unfortunately, when they arrived at Calvary HQ, Judee was there. “Who’s this,” she asked Charity, “your new boyfriend?” Phil wasn’t any happier to see his father than Judee was to see her rival. And Phil only became unhappier as Yusef spun his yarn about what Phil’s mother and Judee’s father had done. “This is all just… Satan!” Judee insisted. It was a hell of a reunion, anyway. In no time, Phil was threatening to call the cops on his father and telling him, “I don’t want to ever see your face again… Yusef.” Horrified at her ex having become the living embodiment of “There are none so blind as those who refuse to see,” Charity promised to pray for him. “Most people say that as an insult or a warning,” she noted. “But right now, it’s just a fact.”

In other developments, Zora had scarcely shared with Sophia that she was flying to New York that evening — in hopes of ultimately enrolling in the New School — when her cousin had blabbed to her parents. For once, Jacob and Kerissa pulled it together, worked as a team and persuaded their daughter to give them a couple of days to see if she could stay with cousin Camilla. “Doesn’t she live in Hoboken?” Zora cried. “That’s not New York!” But it being close enough, she acquiesced. (Hilariously, she also got over being miffed at Sophia by telling Grace about the girl’s reluctance to return to Hampton following the publication of a “mildly provocative” selfie.) At the hospital for AJ’s appointment, Grace and Noah made great strides in establishing a new relationship as coparents and friends. She even managed to choke down her jealousy over the fact that their son had agreed to see the doctor merely because his dad has asked him to. In return, Noah, who’d just gotten a home near his mom’s, offered to question Mrs. Davis’ neighbors about “that Negro” to whom her caretaker’s journal so often referred. And, “if your parents do give up the house and you need a place to stay,” he added, ”you’ve got a place with [me and AJ] — platonic.” I could be starting to like this guy.

‘WE ARE NOT GIVING THIS HOUSE TO THOSE CON ARTISTS!’ | Mind you, at that very moment, Bishop was insisting to Lady Mae that hell would freeze over before they gave Tara the house, not after Rochelle “threatened me with all the subtlety of a gang enforcer.” But why would white old Mrs. Davis give her house to Darryl? For that matter, Lady Mae asked, “why would she leave it to us? Till Mac sent you over there to see her, had you even heard her name?” Just then, their argument was interrupted by Jacob, hoping the family would act normal and gather to say goodbye to Kerissa and Winkie as they set off for her parents’. “Marry someone you love next time,” Lady Mae said, “and stay faithful,” then they won’t have to work so hard to make things seem normal for his kid. Ouch. Once Jacob had left the room, Bishop turned Lady Mae’s judgment against her. How could she be so hard on Jacob when she’d never confessed her own sins? “You’ve lived a lie for 40 years, and you’re still living it,” he railed. So thank you very much, you’d do well to “keep your holy admonitions to yourself.” Upstairs, Kerissa marveled that in talking to Zora, Jacob had kept saying “we” — it had taken them breaking up for him to become the husband she’d thought she was marrying in the first place. Maybe the problem had been her all along. Nah, “I’m glad we met, Kerissa,” he said. And apparently, she was so stunned by his rare show of kindness that she replied that he could have shared custody. (Note to self: Be. Kind. Way. More.)

After the family relocated to the front of the mansion to say goodbye to Kerissa and Winkie, Lady Mae kept them there a moment longer — to announce that “Grace is the product of an affair between Lionel Jeffries and myself.” Oh, and “dinner will be served at 7:30.” Following what we were told was the quietest Greenleaf supper ever, Gigi, Charity and Jacob were getting their drink on when Grace got a call from Darius. They got Bob, he said. One of the names Yusef had given them had panned out — they had someone to go on record, meaning that Yusef would do the same. Could she come over ASAP? She could, and she did. But when she arrived at Darius’, he didn’t answer the door. Or his phone. Then Fernando pulled into the driveway and creepily offered to take Grace to Darius. When she refused to go — who would’ve gone?!? — he told her that “no one cares anymore about journalists. Stay out of it.” But where was Darius? How would Grace find him? And would she find him… alive? Sound off in the comments with your theories/fears. Also, how much more of Judee can Phil or anyone possibly take? They deserve each other, but still… !