This recap contains spoilers from Episode 11 of DC’s Stargirl (which premieres new episodes Monday on DC Universe and Tuesday on The CW).

This week on DC’s Stargirl, a blast from Courtney’s past threatened to derail her superheroic future. Plus, Brainwave orders Icicle to ice [Spoiler].

Coming off of last week’s deadly clash with Dragon King and Brainwave, Pat urged Barbara to pack up Courtney (and Mike, while she’s at it) and get out of Dodge. Barb, though, declined to, partly because Henry King Jr.’s death suggests that the ISA will spare no one. If everyone is going to stay put, Pat says, they all need to act normal and none the wiser, lest they become primary targets for Brainwave, Icicle et al.

The doorbell then rings, and it’s none other than Sam Kurtis (played by Enlisted‘s Geoff Stults) responding to his ex’s email with an in-person appearance. Though Pat makes nice meeting his predecessor, an unimpressed Courtney dismisses Sam as being “not my father.” Sam acknowledges he has been out of the picture for “a while,” but when he realized that Barbara had returned to Blue Valley (of all places), and upon getting her email, he had to see what’s what. Sam shows Court that he has a locket just like hers, noting that he gave her hers back in the day — but Courtney isn’t convinced. She then pulls Pat aside to wonder what she has been doing this whole time, as Stargirl, if she isn’t in fact Starman’s daughter. Like, why would the Cosmic Staff have chosen her? Meanwhile downstairs, Barbara grills Sam about his return, given how he vanished that Christmas Eve a decade ago and hasn’t been heard from since. He admits that his true purpose is to get to know his daughter. And to that end, Court agrees to grab breakfast with Sam, before heading to school. 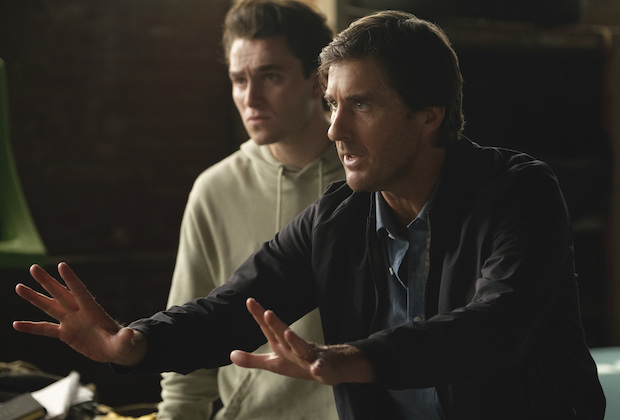 Pat swings by the auto shop to update Rick (who is still poring over his dad’s coded journal, though no one seems to care) and Beth on the Courtney sitch, when who strolls in but Justin the high school janitor (who at the top of the episode was seen looking for his steed at an unamused farmer’s ranch). Justin is clearly disoriented/in some fugue state, because he mistakes Pat and the kids for Dragon King and two minions, and thus brandishes Excalibur! Pat manages to snap Justin out of it for a bit, at which point the Seven Soldiers of Victory alum breaks down sobbing. Nudged to recall his story from “the time of knights and dragons,” Justin says, “I was a lowly yet loyal page, cleaning the stables,” when King Arthur on his deathbed bestowed him with the sword: “He told me heroes can come from anywhere.” But how did he wind up in Blue Valley? “All of you soldiers were scattered and gone, but the dragon still needed slaying,” Justin recalled. Alas, he was captured, after which “they stole my identity from me. And they’ll do it to us all!” Pat brings Justin home, telling Barbara that he suspects the ISA planning a mass brainwashing.

Henry Sr. pays Jordan a visit, affirming that Dr. Ito restored his memory, and he thus knows who Stargirl is — Courtney Whitmore aka stepdaughter of Pat Dugan fka Stripesy — and now he intends to kill them both. Jordan asks him not to, saying that the loss would devastate Barbara. Henry notes that he has sacrificed both his wife and son in the name of their project, which is more attainable than ever now that he has “absorbed” dead Junior’s own power. When Henry offers to “erase” Barbara’s memory of her husband and daughter (perhaps as he once did with Justin?), Jordan reminds him that no one is ever the same after that process. Growing impatient, Henry urges Jordan to make up his mind. 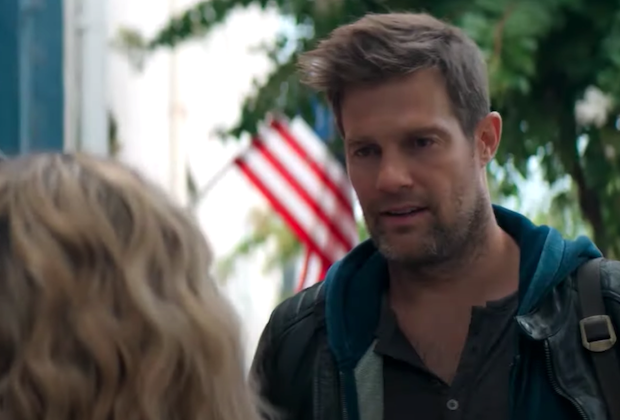 Breakfasting at the diner, Sam tells Courtney that after bailing on her and Barb, he “traveled a lot, looking for work, chasing leads and business opportunities that never panned out” (or that he screwed up). Maybe she can visit him in California sometime, and they can get to know one another better? But when Sam brings Courtney back home (seriously, how late for school will she be?), he pauses to ham-handedly point out that their lockets are quite valuable, having been made by “an old-time jeweler to the stars.” And if Courtney give him hers, he can sell them both and put a deposit down on his own place, for her to visit. Courtney responds exactly as Jason Robards did in the Parenthood movie when Tom Hulce asked for one final loan — with a defeated nod. Afterward, Pat invites Court to take out her frustrations on him; instead, she runs into his arms, sobbing. Off of that, Pat catches up to Sam, asking, “What the hell were you thinking?” before warning, “Don’t ever come back here.” When Sam quips about how good Barbara still looks (though not as good as when he “had her”), Pat decks the lout, and then points out, “You’re lucky I’m busy.” Indeed.

Back at the house, Barbara tells Court that she is struggling over their next move, realizing that families in Blue Valley need protecting. And yet, “If I let you stay and fight, you might die.” When Courtney opens the crate and the staff doesn’t respond to her, she laments, “I don’t think it matters, Mom. It’s not meant for me anymore.” Courtney finally makes her way to school, to alert the rest of the team that her dad was not Starman but “just some jerk.” Yolanda and Beth try to brush off the importance of legacy, but Court points out that the staff isn’t working for her anymore. And that with Joey and now Junior both dead, “I can’t have anyone else get hurt because I thought I was someone I’m not.” Later, at a school gathering about Junior’s death, Sr. addresses the crowd — but gets into Courtney’s head specifically, making clear that he blames her for his son’s death.

Panicked, Courtney returns home to the crate, though for naught. Pat assures her that while he doesnt know much about staff, “it always knew your dad wasn’t Starman.” Instead, it chose her because it believed in her, “and now it’s waiting for you to believe in yourself again.” (Remember, “Heroes can come from anywhere.”) With Pat and Barbara both at her side, Courtney gives the staff one more go, and as wind from an unknown source flits through her mane of beach waves, the staff glows anew — popping a few basement lights in the process. Court stands up and beams as brightly as the staff, as Barbara and Pat look on… as does houseguest Justin. “Our queen has risen!” he marvels.

Stargirl powered back up just in time, seeing as Jordan — after hacking into Barbara’s computer to see she had Googled a “Starman Murdered by Icicle” news story — is now on board with Henry doing whatever is necessary, as the Project New America countdown clock shows about 12-1/2 hours until launch. “We’ll take care of Stargirl, her sidekick, and her mother,” Henry affirms. At which point Jordan interjects, “…and the boy, too. Mike.” After all, you “can’t leave a legacy running around.”

What did you think of the episode “Shining Knight”?