The end of Sunday’s Yellowstone felt more like the end of a dream. “Everything I’ve done,” muttered John in disbelief, “it’s all for nothing.” What had left the Dutton family’s patriarch feeling so downtrodden? Read on and find out… 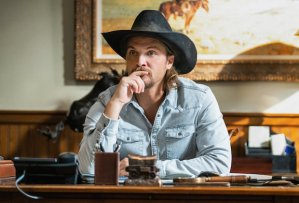 ‘WHAT HAPPENED TO COOL HEADS?’ | As the episode began, a Native American mom discovered that her older daughter Sila hadn’t made it home the night before. When it became obvious that the girl might never make it home again, Chief Rainwater called Kayce for help searching for the missing person that, in his heart, he knew wasn’t missing but dead. Over at the ranch, as Rip, Kayce and some of the bunk-house boys were about to move their cattle uphill — right past the buffalo that the resort had installed as a tourist attraction — John instructed the cowboys not to flare up at bison babysitter Wade. And then he immediately flared up at the scoundrel himself. “What happened to cool heads?” asked Kayce. “I didn’t mean me,” his dad replied. When Wade refused to lose a moment’s sleep keeping the buffalo from crossing onto Yellowstone, Kayce told him that that was fine. “I’ll keep ‘em out, but you’re gonna f–king hate the way I do it.” So yeah, although John and Wade’s feud was so old, it should’ve been long dead, it still had a lotta life in it.

At the Duttons’ place, Jamie sorta randomly decided that he was sick of being picked on by Beth, so he wanted to address the elephant in the room, right then, right there. This was a mistake of epic proportions. He’d ensured that his sister could never have children, she reminded him. And “you actually believe that you’re helping, like in your heart. But you refuse to acknowledge the carnage that your help leaves behind, because as a man, you’re broken.” Seriously, this scene was like watching Beth slowly pull Jamie’s spine out through his mouth. She almost didn’t blame him, even. John “made you into something you had no business being. But there’s no right or wrong with you, just his approval” — and a fear of Daddy’s disapproval that was so great, it made him evil. “And you are evil. You have to know that.” Jamie feebly protested that he’d only ever tried to protect the family. But it was like throwing a glass of water at a forest fire. “The more you become what he wanted you to become,” Beth continued, “the more he’ll hate you for it. And he does hate you for it. We all do.” Lord, I hope there was some Irish in their coffee. That was rough! 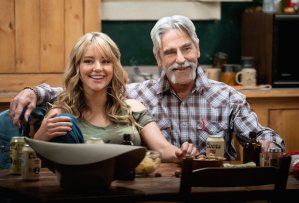 ‘YOU GOTTA LEAVE YOUR BRAIN OUT OF IT, DECIDE WITH YOUR HEART’ | Watching Mia and Laramie practice their barrel racing, Lloyd was incredulous. “Two dances [with Laramie], and here I am hauling them to the arena, saddling their horses,” he marveled to Jimmy. “Now I’m the damn buckle bunny.” (Hey, it wasn’t just two dances; Laramie also regularly called the old coot baby and sugar.) By and by, talk turned to Mia; she was gonna want more than the bunk house someday, Lloyd told Jimmy. Unfortunately, he had no idea how to provide it for her, what with his rodeo days being over and all. Riding bucking broncos had been supposed to be his ticket to Easy Street. It still could be, suggested Lloyd, adding that he’d only quit the circuit when his body had quit on him. Damn it, Lloyd, what are you getting that boy into besides traction? Meanwhile Market Equities CEO Willa Hayes arrived in town for a sit-down with Roarke and Jamie. Though the black sheep of the Dutton family at first appeared to be up to the task of holding his own with Willa, she made his jaw drop so hard, it almost thunked when she proposed buying John’s 50,000 acres for $10,000 an acre. “You see that look? Desire,” she told Roarke as they left. “We’ll close” the deal. “I don’t think he’s the hard one to close,” Roarke replied. Truer words might never have been spoken.

After the search for Sila yielded the expected result — her body was found in a ditch — Monica was understandably upset by the unfairness of it all. “There’s monsters everywhere in this world,” Kayce told her. “Ya just gotta kill ’em when ya find ’em.” How, she responded, were they supposed to be found when manpower was so low, Chief Rainwater had had to call Kayce for extra hands. When Kayce, clearly not getting it at all, told his wife not to make it her fault, she had to explain, “I’m not making it my fault, I’m making it my problem.” Hear her, Kayce. Stop making it worse. “Ya can’t stop the world from being bad,” he said, totally ignoring my sound advice. “Doesn’t mean we shouldn’t try,” Monica replied. Elsewhere, Mia and Laramie heard about the nearby buffalo, and off they went with the bunk-house boys to see if they could take a ride. “Those girls,” Ryan predicted, “are gonna get us killed.” Yup. “And they ain’t even our girls,” replied Colby. The following morning, Beth warned John that what Yellowstone was facing… “it isn’t an enemy, it’s a perspective, it’s a shift in values. The world doesn’t value your way of life anymore, Dad.” She couldn’t wage this war by herself. Then she’d have to teach Kayce how to fight, John said. And learn to trust Jamie. Come again? When she balked as only Beth could, her father pleaded with her to reveal what she knew that the rest of them didn’t. “What did he do?”

‘IT’S ALL FOR NOTHING’ | Finding Monica looking for clues at the crime scene — and, beyond that, looking to ease her feeling of powerlessness — Chief Rainwater told her that he was forming a council to address violence against women on reservations. “Our first fight is against being ignored,” he said. “I can lead that fight,” she replied, a new purpose in her voice. Back at Yellowstone, off his talk with Beth, John entered the house with murder in his eyes. Practically chasing Jamie around the room, he asked what would happen in 30 years? When Tate had to fight for Yellowstone, who the hell was gonna be around to fight with him, thanks to Jamie? Thankfully, before John could break any promises not to beat the life out of Jamie, Kayce came in and broke up the scene. At that point, John stalked off to mutter hopelessly, and Jamie punched out the stained glass in the front door, then angrily sobbed, “I f—king hate him!” like a potty-mouthed Jan Brady. So, what do you think will be the fallout from Beth’s revelation? Will John tell Rip and let Rip put Jamie in one of those open graves? Will Jamie screw over Daddy? Hit the comments with your predictions.