The Sinclair Broadcast Group — the largest owner of local television stations in the country — has scrapped an episode of America This Week that featured the controversial virologist whose Plandemic video was taken down by Facebook, YouTube and other major platforms.

In the nixed episode of America This Week, which is hosted by Eric Bolling, Dr. Judy Mikovits shared her theory that immunologist Dr. Anthony Fauci — a member of the White House’s coronavirus task force — has for years manufactured coronaviruses and shipped them to Wuhan, China. Though Mikovits, when pressed, stopped short of asserting that Fauci created the coronavirus the caused the current pandemic, the chyron “Did Dr. Fauci Create COVID-19?” appeared across the bottom of the screen. 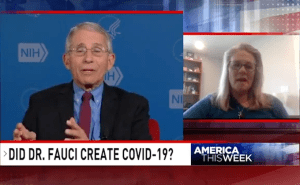 Criticized for giving the controversial Dr. Mikovits a platform, Sinclair at first shared a series of tweets that said, among other things, “At no juncture are we aligning with or endorsing the viewpoints of Dr. Mikovitz or [her lawyer] Mr. Klayman or endorsing the Plandemic documentary,” adding: “We’re a supporter of free speech and a marketplace of ideas and viewpoints, even if incredibly controversial.”

But on Saturday afternoon, Sinclair — which owns, operates or has service agreements with 191 television stations in 89 markets — announced its decision to delay the episode entirely. (Update: The episode in question apparently aired on WCHS in Charleston, West Virginia, prior to the decision.)

After further review, we have decided to delay this episode’s airing. We will spend the coming days bringing together other viewpoints and provide additional context. All stations have been notified not to air this and will instead be re-airing last week’s episode in its place.

We would also like to clarify that at no point did we air the “Plandemic” documentary, nor do we have plans to. This documentary has been widely discredited and we as a company do not support the baseless claims that were rebutted during the original segment.

Further, we valiantly support Dr. Fauci and the work he and his team are doing to further prevent the spread of COVID-19.

This of course is not the first time Sinclair has come under fire for controversial messaging. As Last Week With John Oliver famously documented (in the video below), the broadcast group is known to compel its nationwide network of local news anchors to read, verbatim, scripted editorials that move forward specific political viewpoints.