Room 104‘s final check-out may be looming, but fans of the mind-bending, surrealist series have a lot of surprises in store before its door is locked for good.

On board to tell its stories this season are Dave Bautista, Melissa Fumero, Harvey Guillen, Kevin Nealon, Ron Funches and Shannon Purser, among others, with each episode unfolding with a revolving door of moods and genres. A woman battles a deep addiction, time travel throws the room for a loop, and in the case of the premiere — starring the show’s co-creator, writer and director Mark Duplass — an estranged musician gives a private performance that goes horrifically and comically sideways. (Click here to read our premiere recap.)

Here, Duplass talks to TVLine about his character’s “sad uncle” vibes and pitch-black past, giving up-and-coming artists a voice and the new phase of his creative life.

TVLINE | I’m bummed Room 104 is coming to an end! How are you feeling about saying goodbye?
It definitely feels bittersweet. I’m also bummed, if I’m being totally honest. I have a document of 100 different ideas, and I think the show, at its best, can last a long time. It’s become less about me telling the kinds of stories that I personally want to tell and more about me becoming sort of an uncle to those who haven’t had a chance to tell their stories elsewhere. That’s the bummer part. The sweet part, and I’m not just saying this: There’s no way we should’ve survived after Season 1 in this Dionysian market of way too much TV. We were a very cool late-night show that was well reviewed, but by no means did we break out like a Fleabag did. It’s a real testament to HBO, who saw the value in what we were doing and let me do three more seasons after that. I don’t want to be a spoiled brat about it. I realize the value of what I’ve got, and I’ve got a really good home at HBO. We’ve built our whole company off this essential premise of: If you make things cheaply enough, they’ll hopefully let you keep going. [Laughs] It really worked in this scenario.

TVLINE | “The Murderer” absolutely threw me through the wringer. I couldn’t tell if it was going to be a straight-up drama, comedy or even a Creep-style horror tale. What inspired you to write this one?
I love the tonal roulette wheel of Room 104. It’s probably one of the only shows on TV where you don’t show up because you know what you’re going to get and it’s going to make you feel a certain way; you show up because you absolutely don’t know what’s going to happen and you want to be surprised. I try to double down on that as much as I can because I enjoy the paradox of episodes like “The Murderer,” which to me are all things. There are times when it should be Dumb and Dumber-level stupid funny, and it should be a little creepy, and it should be a little dramatic. That’s really fun for me to explore.

The stories come to me from an instinctual place. I’ve always loved singer-songwriter Mark Kozelek. He’s got this wonderful, dark, strange energy about him. I started thinking about him and what it means for fanboys to be a fan of obscure artists, and how they love them and want to own them. Those people that say, “I was there when there were only eight people at the show!” It’s all about the fanboy, and it’s never about the artist. I wanted to make an extreme example of what would happen if they were put face-to-face with the reality of what this thing is that they’ve been praising for so long. I also love that every time a cool old rock star is talked about in any show or movie, they always show up and look so goddamn cool. Their hair is perfect, and their tattoos are amazing. I was like, “What if he just looks like your sad uncle in a bad golf shirt and khaki cargo shorts?” [Laughs]

TVLINE | It’s amazing Katherine didn’t flee screaming after hearing “Around Clyde’s Backyard.” Why did she stay, and what does that say about her?
I met Hari Nef, who played Katherine, because we’re both part of this organization that supports public libraries. We developed a connection of, like, “This feels strange, these odd rich people gallivanting here and smiling, and we feel different from them.” That same energy, I think, is what’s happening in the room between Katherine and Graham in the episode. One of the main reasons I cast her is because we already had that dynamic. I think old pain recognizes old pain. She’s from a place where she sees him and he sees something in her, even though they don’t have a label for it. I’ve always loved that old sort of Dracula trope. They’re drawn towards each other in a strange way, and she starts to recognize how f–ked up that fanboy dynamic is. 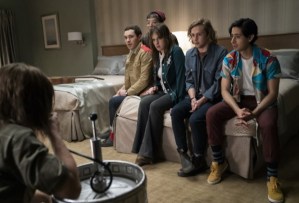 TVLINE | Graham did this monstrous thing, but at the end of the day, he’s just a human being in massive amounts of pain. Whether he’s mentally unstable or mad is kind of irrelevant. What’s your take?
That’s kind of how I feel about it, too. We have 22 minutes to tell the story, and it’s neither here nor there. For me, it’s about his experience of it. I don’t really have that level of fandom for me in anything that I do, but I’ve seen it. They want to feed off of someone’s pain to give themselves massive joy and glee. It’s such a weird thing when you think about it.

TVLINE | Were there any surrealist films or shows that paved the way for Room 104?
I didn’t really reference it to other shows very much at all. When I started this show, I was feeling that, for better or for worse, the Duplass Brothers were starting to formulate into some sort of brand, and people were starting to have expectations of the kinds of stories we were going to tell. I needed to break out of that. So Room 104 started as, “This is going to be a bolt of unexpected electricity that is able to express the other sides of me that are starting to not fit into this ‘brand’ that I didn’t really want to create in the first place.”

TVLINE | So many writers and directors have entered Room 104. How has collaboration affected the types of stories you’re able to tell?
I authored quite a bit of the first season and then realized it would get repetitive quickly if I just kept airing out the dark side of my brain, so to speak. In Season 1, we gave a bunch of people their first shots, whether it was character actors having lead roles for the first time, or short-filmmakers and independent filmmakers who hadn’t broken into television yet. This coincided with the sort of conscious uncoupling of me and Jay as a truly co-dependent creative duo, and us realizing we needed to get a little space in order to grow as artists.

Room 104 began the new phase of my creative life and the life of our company at the same time, realizing we need to do more to support all of these voices. So the show shifted at that point and became less about my vision and what I can do to express my strange self to: “How can I be the person who uses whatever skills and platform I can to help out our ecosystem, and as a wonderful byproduct, make more interesting stories?” Room 104 has oddly become the microcosm of where we want to head as a company and what we feel like our new mission is.

TVLINE | Are there any episodes you’re excited for fans to see or any performances you’re particularly stoked for?
Yes, there are so many! I really love what Dave Bautista did for our “Avalanche” episode. He’s a massive movie star. We were so lucky to get him into Room 104 at all. It’s a pretty dramatic role, and he is limitless with his talents and what he can do.

TVLINE | I just watched that this morning! He absolutely killed it — such a devastating performance.
I’m hopeful that people will watch this and see that side of him. As lucky as we were to have him, I think he saw this as an opportunity to express this side of himself, one he felt he wanted to do and that he could do. I hope it leads to more for him. On top of that, I love our finale episode. It wasn’t something that we planned on being the series finale initially, but once we realized what it was going to be, we shaped it into that and it became this perfect way to stick the landing of what Room 104 is.