The Boys are kicking things up a notch in Season 2. When the Amazon Prime series returns on Friday, Sept. 4, “it’s a lot more intense” than the show’s freshman run, showrunner Eric Kripke said during a Comic-Con @ Home panel on Thursday.

“We worked hard to make Season 2 crazier, but also more emotional and higher-stakes,” Kripke previewed. “Everyone’s in a really tight spot. The Boys are wanted fugitives coming off of last season. They’re hunted. They’re basically totally screwed, and they’re doing their best to fight back at Vought, however they can, but Season 1 was a big loss for them.”

“Conversely, Homelander killed, really, the only person who could control him, Stillwell, and so he’s increasingly out of control,” Kripke continued. “He’s ascendent. He’s making Voight a scarier place, and Starlight is sort of trapped in this living nightmare. So everyone is pushed to the limits.”

Plus, Season 2 will tackle some very big and timely subject matters, including white nationalism and systemic racism. “We try to make it kind of a commentary on the up-to-the-minute world we’re living in, because it’s just this strange blur of politics and celebrity and media and social media manipulation,” Kripke explained, “and it says so much about the world that we’re in that we try to get some pretty sharp commentary in.”

Read on for scoop from the cast on what’s in store for the various members of The Boys and The Seven, as well as a sneak peek at a brand-new scene from Season 2:

BUTCHER | After discovering the truth about what happened to his wife Becca, “Season 2 really becomes about getting her and saving her,” star Karl Urban previewed. That leads to “moral questions” about how far Butcher is willing to go and “how much is he willing to sacrifice” to rescue his wife. “There’s a certain evolution for Butcher in Season 2, where he has some tough choices to make, with whether he will be able to do something to achieve that goal to get him close to Becca, [or] will he, again, jeopardize his team?” Urban shared, adding that his quest will feature a surprising ally: Starlight. “[It’s] such an unlikely, odd-couple pairing.”

HOMELANDER | Commenting on a Season 2 photo of Homelander drinking milk from a bottle, his portrayer Antony Starr replied with a smile, “He finds traces of Stillwell and reconnects that way, and that is a moment of pure connection between Homelander and Stillwell [in] Season 2.” 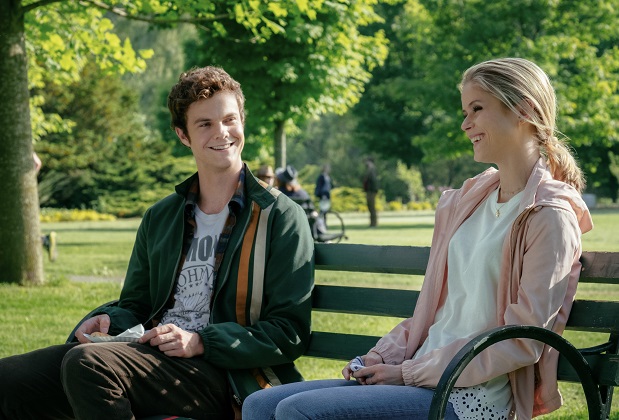 HUGHIE | Betrayed by Butcher, Hughie feels “very alone” and “terrible about lying to Annie all of Season 1,” actor Jack Quaid described. “Then at a certain point, he starts realizing, like, ‘OK, what do I do now? I need to keep this fight going. I kind of have to because I don’t really have anything else, and this is the right thing to do.’ He sneaks a few conversations with Annie, even though they’re not technically supposed to, because he’s on the run. It’s not something romantic yet, although he’s kind of hoping it could be.”

STARLIGHT | The formerly naive hero “kind of steps into her own power,” her portrayer Erin Moriarty previewed. While Annie’s “forced to adapt to the dark world that she’s become exposed to,” her morals “stay totally intact,” as does her mission “to be the best superhero in the world. [But] her means to attain that objective totally change, and that’s where some really interesting storylines come in, like collaborating with characters and doing team-ups that you would never anticipate, and exploring dynamics between her and Hughie, for example, who’s broken her heart, who she has residual feelings for, who she totally fell in love with. But the only way that both of them are able to attain their goals is to get over that and work towards their goals together… A really thick wall goes up with her that is inevitable when you take someone who’s really earnest, naive and kind of gullible, and then they have their heart broken by every single person in their life that they love, by all the systems that they believed in.”

A-TRAIN | After abusing Compound V, the ‘supe is in “bad shape” and “has so many things that he’s been, literally, running from for so long,” actor Jessie T. Usher described. “Now he’s in the place where he has to just stop, turn and face these things, and it’s tearing him apart.” Plus, viewers will learn that there are “quite a few people who have the same ability as him. They might not be quite as good as he is, but that is always in the back of his mind: ‘I’m not the only super speedster in the world.’ … So he’s willing to do whatever it takes to keep that top spot. We’ll learn a little bit more about that in Season 2, like why it means so much and the things that he’s afraid of happening.”

MOTHER’S MILK | With Butcher MIA, Mother’s Milk becomes the de facto leader of The Boys and continues to be “the voice of morality to keep us from going so far over the edge where we might become as dark as the ‘supes,” his portrayer Laz Alonso said, “so that we don’t forget why we’re here and what we’re fighting for.” 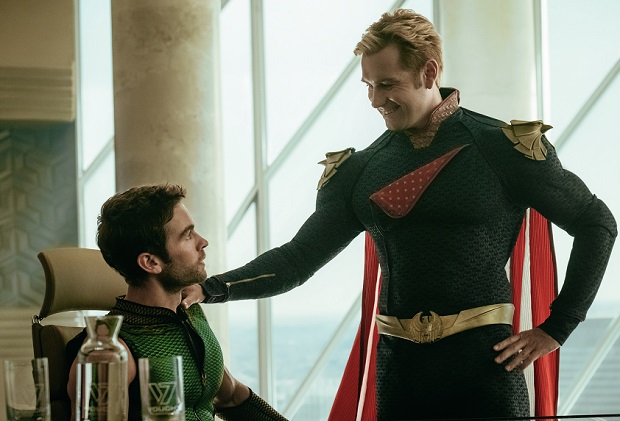 THE DEEP | After answering a question from a dolphin buddy (and hilariously flirting a little with it), Chace Crawford revealed that The Deep “goes on a few different quests to find love and to find connection. There’s some humor inter-laid in there… [Plus], someone joins him from his past, and it’s a very interesting storyline.”

THE FEMALE | The silent fighter’s “relationship with her history that we find out in Season 2 alters the relationship that she has with Frenchie a little bit,” actress Karen Fukuhara teased. “It’s interesting to see different sides of her come out: not so much the feral, animalistic side, but her growing into her own womanhood and her individuality.”

FRENCHIE | The new season will explore Frenchie’s origin story and maybe even reveal his real name. And as Fukuhara shared, Frenchie and The Female’s dynamic will go through a transformation. In the first season, “all Frenchie did was kind of hang on to what he saw as the most beautiful thing he could take care of, which was The Female,” actor Tomer Capon described. “In Season 2, she can’t take it anymore. She’s gotta spread her wings and start talking!”

STORMFRONT | The Seven’s newest recruit will likely leave viewers feeling very conflicted with her prescient storyline. Without revealing too much about her role, new cast member Aya Cash noted, “My job as an actor is to find the humanity and go to, like, the ugly, gross parts of ourselves, and it’s Eric’s job to decide what happens to that character. I think that he has done a beautiful job of both allowing her humanity and, hopefully, punishing her.”

Press PLAY below to watch a sneak peek, then hit the comments with your hopes for Season 2!