An overly chatty Alexa might want to get an agent, seeing as the creator of NEXT says that the smart home device helped sire Fox’s new fall drama.

“My son has an Alexa in his room, and one morning he was looking very tired [and] he was like, ‘Alexa started talking to me at 3 am.’ That happened a couple of times,” exec producer Manny Coto (24: Legacy) shares in the video above — which, yes, was shot one year ago at the San Diego Comic-Con (in San Diego), hence the now-discomfiting references to crowded elevators and bus stops [shudder]. “That immediately got me thinking about this creepy, ‘ghost story’ image, coupled with research on superintelligence and how it could really happen.”

John Slattery (Mad Men) headlines NEXT as Paul LeBlanc, a Silicon Valley pioneer who built a fortune and legacy on the world-changing innovations he dreamed up. Upon discovering that one of his creations – a powerful artificial intelligence called NEXT – might spell doom for humankind, Paul tried to shutter the project, only to be kicked out of the company by his own brother, Ted (Ozark‘s Jason Butler Harner). 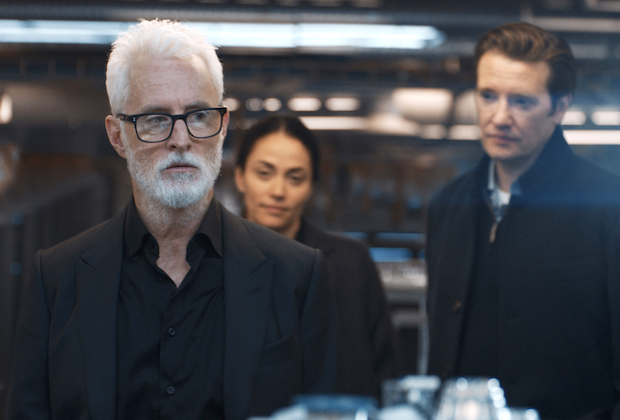 In the video above, several of the cast share their own experiences with modern technology — for better or for worse! At the 4:00 mark, Slattery reveals what his character is dealing with beyond his fugitive A.I., after which we talk about the frightening, potentially self-protective nature of superintelligence. As an A.I. gets smarter and smarter, “The first thought it has is you are the thing that’s going to destroy it,” warns Slattery, “so the first thing it’s going to do is protect itself.”

“I’m surprised that a show like this hasn’t come out sooner,” Harlow at one point says, “because I think it’s really important to talk about… technology that we’ve just adopted without questioning it whatsoever.”

Fox’s NEXT will premiere this fall (date TBA), airing Mondays at 9/8c, where it will lead out of fellow freshman Filthy Rich.