In the end, Blindspot concluded the same way it began: with Jane Doe stuffed in a bag in the middle of Times Square. This time, though, she wasn’t emerging from an unmarked duffel; rather, police were zipping her up in a body bag as the show came to an end.

The NBC drama aired its 100th and final episode on Thursday night, which culminated with a (seemingly) devastating twist. Even though Jane and Weller successfully defused a ZIP bomb that Ivy Sands had planted in New York — which would have wiped countless memories across the city — it was revealed in the final scene that Jane ultimately succumbed to the ZIP poisoning she’d encountered at the end of Episode 10.

Though Patterson had administered an antidote to Jane after she got ZIP-ed, the cure simply wasn’t strong enough for Jane, who’d previously been exposed to so much ZIP years ago that this new dose affected her much more than the average person. To that end, as a result of the ZIP poisoning, Jane spent the entire finale hallucinating people from her past — and we’re talking virtually everyone who has ever appeared on the show, including Roman, Shepherd, Dr. Borden and many more.

Jane was a little freaked by the visions at first, knowing they were a sign of her impending, ZIP-induced death. But when she realized the hallucinations were helping her figure out and stop Ivy’s plan, she decided to forgo a second injection of Patterson’s antidote and keep the hallucinations around… until, apparently, it was too late to receive the ZIP cure.

For series creator Martin Gero, however, Blindspot‘s ending isn’t quite so black and white. TVLine spoke with the EP after screening the finale, and he offered some insights on Jane’s fate, as well as the “overwhelming” experience of shooting an episode that brought back dozens of previous cast members. Read on for his breakdown of Blindspot‘s final hour. 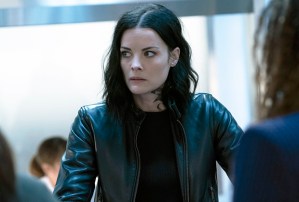 TVLINE | You’ve spoken before about your initial plan for Blindspot, including the big twists that you’d envisioned when you first pitched the show. How much of the finale was in your head from Day 1? Did you always know how you wanted it to end?
I did, and it has grown and transformed over the years. There were certainly elements of the finale that I had in my head that are part of the show, mainly returning to Times Square. But the exciting thing about working on a TV show is that when you start, it’s just you. It’s you, alone, in a room, and then thousands of other people come into contact with it and add their incredible intelligence and artistry. You’d be a fool not to let the show grow in directions you hadn’t anticipated to accommodate their amazing ideas. So parts of it, absolutely. But this really is a collective achievement of the room.

TVLINE | My interpretation of the ending was that Jane had died, and the dinner party at the end was perhaps her version of heaven. Is that how you want viewers to interpret it? Do you feel it’s more open-ended than that?
I don’t think there is a correct interpretation of it. I obviously have my intent, and I and the writers have a strong idea of what we believe. But we wanted it to be a bit of a Rorschach test, and I can’t believe how effective it is. Fifty percent of the people [who saw the finale ahead of time] think she’s definitely alive, and 50 percent of the people think she’s definitely dead. We wanted it to be everything for everybody. [Laughs] We wanted to do the things that we wanted to do, but we also knew there were some fan things that they desperately wanted to see, at least for a moment in the show. We made a big list and said, “OK, in our dream finale, what’s everything we could put into it?” And then we tried to honestly put as much of that into it as possible, as you can see. It’s a very full episode. But we wanted everyone to have an ending that they could feel good about at the end of 100 episodes.

TVLINE | The episode also drops a few hints about alternate universes and multiple iterations of events. Should that factor in to how we view that final scene?
I’ll let you interpret that as you will. [Laughs]

TVLINE | So there does seem to be some ambiguity here about whether or not she really died. Why did you decide to take that approach, as opposed to tying everything up with a bow in your last episode?
I won’t speak to whether she’s dead or not, but I think ambiguous endings… here’s the thing. This will not be an ambiguous ending to most people. Most people will believe that it’s one way or the other and have evidence on either side to make that case. What we tried to do was, yes, it’s ambiguous if you take a step back. But in reality, the viewing experience will be very clear one way or the other. 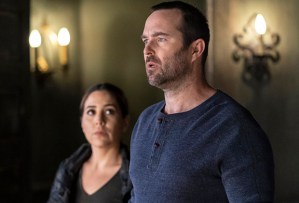 TVLINE | As a point of clarification: All those scenes that take place between the bomb getting defused and Jane realizing she’s dead — did those really happen in some form, if Jane didn’t actually survive? Patterson’s goodbye scene with Zapata and Rich, for instance?
It’s open to your interpretation. [Laughs] I’m sorry. We’re really happy with the balance of the ending, and these are conversations we want the audience to make the choices on.

TVLINE | Let’s talk about the sheer number of people you brought back for this finale. Is it safe to say the only big absence was Bethany Mayfair?
Yeah, it just didn’t work out scheduling-wise, unfortunately. [Marianne Jean-Baptiste] is an incredibly in-demand actress, and we just couldn’t make it work.

TVLINE | I have to imagine it was a logistical nightmare to bring so many people back, especially for group scenes.
Yeah, it was a Sisyphean feat pulled off by both production and our casting department. We had this idea toward the end of Season 4, and I just made the calls. I called everyone and said, “Hey, we can’t afford to pay you your full fee.” [Laughs] “Please come back. Can we figure out a way to get you back for a day?” And everybody said yes, which really speaks to the kind of vibe that our crew has created over the past five years. People were just excited to be included, and they were excited to come back and hang out one more time before this very special collection of people all went their separate ways.

One of the things we did do was shoot over two months. We shot this episode off and on from the beginning of September to the middle of November, in part to accommodate everyone’s schedule. For instance, that Big Bad collection was so hard to pull off, to get everyone there in the same room. In fact, Tom Lipinski [who plays Cade] was on Snowpiercer, and the reason he’s in the first scene and not the second scene is he took an overnight flight from Vancouver, was able to shoot with us for four hours just to film his cameo, and then got on a flight and flew back to Vancouver so he would only miss a day of filming for his TV show. It was so overwhelming to have these people [back], to have Lou Diamond Phillips show up for three hours in the middle of the night in Times Square and just be so jazzed about it. Everyone was coming back for these tiny little moments.

What a lot of people probably don’t notice, upon first viewing, is in all of these flashbacks, a lot of the background players [are also former cast members]. For instance, the people in the cathedral — those are all guest stars from previous episodes. We have a representative of each of the 100 episodes featured, at least in some way, in the finale. 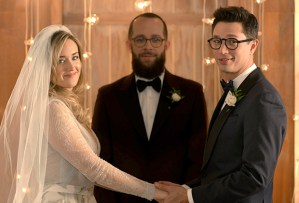 TVLINE | That’s really incredible. And I appreciated your cameo in that wedding hallucination, too. (pictured at right)
[Laughs] Thank you! Joe Dinicol [who plays David] was the officiant at my wedding, so I felt it was only right for me to officiate his wedding with Patterson. I tried to darken it as much as possible and color-correct so it would be as subtle as possible, but yes, thank you.

TVLINE | The other scene that seemed like an enormous undertaking was that cathedral fight sequence, which at least looked like it was filmed in one take. Can you walk me through what it was like to produce that?
That fight scene was shot over a pretty big two-day sequence. There is a stitch [where a new take is used]. I won’t go into where. [Laughs] There are some cuts. But it was truly a feat by our stunt team and our production design team. We knew we were going to do one last big Jane fight, and we’d been talking about it since the beginning of the season. It became very clear that to do it in the way we wanted to, the production design team would have to design a space in concert with our stunt team. And then, to their great frustration and joy, I kept being like, “It’d be great if one of them caught on fire!” And then, “Oh, what if, when they caught on fire, the sprinklers go off! That’d be amazing!” It was this whole giant set that we ended up building on stage.

And our A camera operator, Pyare Fortunato, he’s in the choreography with it. He had to come in and rehearse with the camera team before we could shoot it, just trying to figure out, “Where’s safe for me to be? How do we capture this?” I’m so glad you liked that sequence. That really speaks to what I’m going to miss most, which is this incredible crew that had this incredible, can-do attitude. One of the things that I’m so overwhelmed by all the time is, there’s nothing but problems in television production. [Laughs] Things always go wrong, things never go as planned. It requires extreme ingenuity from hundreds of people on a daily, sometimes hourly, sometimes by-the-minute basis to ever get these things finished. To watch that team do what they did for five years was the greatest professional thrill of my life.

That’s a wrap, Blindspot fans! What did you think of the series finale? Cast your votes in our polls below, then drop a comment with your full reviews!