Corporate is clocking in for its third and final season of wickedly funny workplace satire on Comedy Central, and it’s taking aim at a fresh target: streaming TV.

Wednesday’s Season 3 premiere opens with Christian begging for the rights to stream Gilmore Girls on Hampton DeVille’s new streaming service Hampton DeView, but he gets laughed out of the room: “Rory and Lorelai deserve better than that s–t swamp you call a streaming platform.” He retreats back to the conference room and bellows at his employees to help him resuscitate their failing streamer, but he and the others get distracted by a more pressing matter: that night’s series finale of the sci-fi hit Society Tomorrow. As they trade theories, Jake rolls his eyes; he’s the only one who’s not hooked on the show.

While everyone else is busy watching the Society Tomorrow finale, Jake babysits his niece and discovers her favorite show is streaming on Hampton DeView: Pickles 4 Breakfast, a truly bizarre animated kids’ show that features a baby eating, well, pickles for breakfast before slashing birds to death with a sickle (!). Meanwhile, at the Society Tomorrow viewing party, everyone is majorly let down by the ending — except Grace, who actually kinda liked it — and that gives Christian a brilliant idea. He’ll pay billions to buy the rights to Society Tomorrow and write a new finale to please the fans! (Yeah, he’ll have to lay off 30 percent of the company to afford it, but still!) 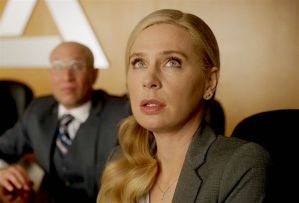 Kate and John head up a team dedicated to writing the new series finale, but when people start pitching ideas, they’re quickly told to shut up. Instead, Kate and John have tasked IT guru Baron with combing Reddit and message boards to find out exactly what fans want and then writing a finale that matches that. Easy enough! But the resulting finale stinks as badly as the original (to everyone but Grace), and when Matt volunteers his services to pen a new finale, he comes up short, too. Meanwhile, Jake ventures into the bowels of Hampton DeVille to find out who makes Pickles 4 Breakfast and discovers it’s the work of “Stravinsky”: a computer algorithm that processes video content and spits out new episodes automatically. Hey, who needs writers, right?

Grace finally speaks up and admits that she liked Society Tomorrow‘s original ending just fine, and Christian realizes that, rather than redo the series finale, Hampton DeVille will just launch a fleet of spinoffs, prequels and offshoots — thanks to Stravinsky! — to “milk that creative IP until the udder runs dry.” Yay, television…?

Give the Corporate premiere a grade in our poll, and hit the comments below to share your performance review.