BET viewers will get a very good sampling of The Good Fight when select episodes of the acclaimed CBS All Access series land on the cabler in late July.

Airing across two nights (as detailed below), this “special presentation” will showcase six episodes from Season 3, which aired in Spring 2019 and in which the lawyers at Reddick, Boseman & Lockhart deal with issues spanning racial biases inside and outside of the office, political resistance, pay disparity, white privilege, voter fraud and more.

This marks the first time that The Good Fight has been available to non-CBS All Access subs since Season 1 was rerun on CBS proper last summer.

The BET playlist is as follows:

“The One About the Recent Troubles” (Season 3, Episode 1)
A storm is brewing at Reddick, Boseman & Lockhart when revelations of past indiscretions involving a partner come to light. Right when she thought the world couldn’t get any crazier, an incident at home pushes Diane (Christine Baranski) to her breaking point. Meanwhile, Lucca (Cush Jumbo) is brought a new opportunity while Marissa (Sarah Steele) teaches Maia (Rose Leslie) to toughen up.

“The One Inspired by Roy Cohn” (Season 3, Episode 2)
Corruption incarnate enters the courtroom in the form of attorney Roland Blum (Michael Sheen), Maia’s new co-counsel on a murder trial. The firm interviews a potential new head of matrimonial law, but Lucca is skeptical of his qualifications. Diane lets off some steam after finding out who recommended Kurt for a new job.

“The One Where Diane Joins the Resistance” (Season 3, Episode 3)
Diane is encouraged to “do something” after meeting the leader of a female resistance group whose aim is to sink POTUS’ approval rating. Lucca receives a surprising new divorce referral while Marissa helps Julius (Michael Boatman) find a campaign manager to support his run for federal judgeship. 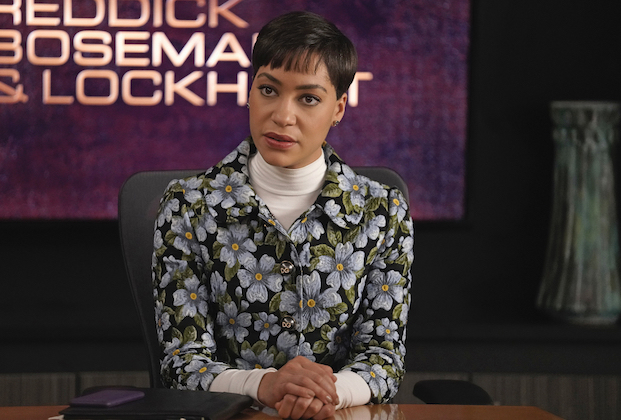 “The One with Lucca Becoming a Meme” (Season 3, Episode 4)
Lucca’s involvement in a viral “mothering while Black” video sparks conversations at Reddick, Boseman & Lockhart that unearth racial biases and pay disparity at the firm. Liz (Audra McDonald) joins Diane at a resistance group meeting, but their next act – to help swing votes in key states – hits close to home when the group decides they need a celebrity influencer.

“The One Where a Nazi Gets Punched” (Season 3, Episode 5)
While volunteering as democratic poll watchers in the suburbs of Chicago, Lucca and Jay (Nyambi Nyambi) come face to face with an alt-right group aiming to intimidate voters. Meanwhile, Maia attempts to move on while the partners grapple with a divided firm following revelations of pay disparity.

“The One Where Diane and Liz Topple Democracy” (Season 3, Episode 7)
Diane and Liz deal with a close ally when assigned to a class action case involving malfunctioning voting machines in the 2016 presidential election. Blum’s domineering tactics continue to push buttons at the firm while he purposefully stalls his work on Second Helix.