Warning: The following contains spoilers for Tuesday’s game-changing Greenleaf. If you keep reading, you’d better pray for the wisdom not to come at us for telling you what happens.

At the start of Tuesday’s Greenleaf, Lady Mae was about as likely to hand over her family’s lavish estate to Tara as I am to give someone, anyone, a sip of my wine. In other words, not very damn. But no sooner had the Greenleafs’ matriarch had a change of heart than she and Bishop made a disturbing discovery that changed… well, everything. Read on, and I’ll explain.

‘EVERY DAY IS A GIFT… EVEN A DAY LIKE TODAY’ | As “The Fifth Day” began, Grace did her best to rouse for the service downstairs Sophia, who’d been up all night dealing with texts from “stupid girls at Hampton” that had seen her topless pic online. Though Lady Mae preached that she hoped her nearest and dearest, perhaps especially Jacob and Kerissa, could see each other in a new light after worshipping together at home, there was probably a better chance of them sprouting angels’ wings and flying into the ceiling fan. Later, Noah recalled that on the clan’s first Sunday in the soon-to-be-demolished church, Grace had lost her virginity to him. Oh, come on, tacky! What? he insisted. That was “as much a part of that church as anything else.” Finally, Lady Mae took off to see Tara. And no, she didn’t want Bishop tagging along. Two Greenleaf men had already gone to see the poor man’s Florence Nightingale and had only made the problem bigger. “With the help of God,” Lady Mae hoped, “one Greenleaf woman can solve it.”

As the Greenleafs chowed down on enough brunch to feed 12 apostles for, like, 12 years, AJ observed Jacob and Kerissa fighting and remarked to his grandfather that there were some people who liked to break things apart. “They just… wanna see how it works,” he theorized, “’cause they don’t know.” In response, Bishop ushered AJ into a nearby garage, where he revealed a box full of parts to build a ’64 Pontiac GTO. Bishop had always wanted one, you see. And his father had gotten him one — but with assembly required. Total. Assembly. Required. Neither AJ nor Bishop knew how to build a vehicle of any sort, “but,” Bishop said, “if you help me put this together, the car is yours.” Sweet way to keep him coming back for some quality time, James. Well done. 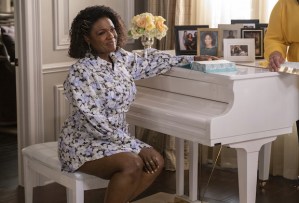 ‘WOW, GUESS I CAN READ A ROOM’ | When Lady Mae visited Tara, she challenged the younger woman’s modest ambitions. “Jesus, He never built a temple,” Tara noted. “He never asked for donations.” Ha — and yet “now you want my house,” Lady Mae noted. But that ridiculously fancy pile of bricks could be turned into a shelter; it could help so many people. Touché. “This morning, I asked God for a new beginning,” Lady Mae replied. “Well, God has… quite a sense of humor.” Off this eye-opening exchange, she returned home and told her husband that Jesus had instructed her to give Tara the house. Nearby, after Grace took a nap on Noah, he recalled that when he had lived in the cabin, he’d found Mrs. Davis’ caretaker’s journal, complete with its references to “the Negro” who’d come by. “What if ‘that Negro’ was Darryl James?” What if?

When Jacob and Kerissa broke it to Zora that they were divorcing, she covered her upset with sarcasm. “I wish you would’ve done it a long time ago — for Mom’s sake,” the teen said. “Who’s she gonna get now?” Some geezer? After Kerissa clarified that the split wasn’t all Jacob’s fault — “We both missed the mark” — she gave a reunion one last (very last) shot. “I am willing to still drop this whole thing,” she told her soon-to-be ex, “but after we tell Winkie tomorrow, its over. There’s no going back.” Yeah, you can’t pile a divorcing/not-divorcing scenario on a moppet whose name is already Winkie; he’s got enough to deal with. Meanwhile, AJ accused Sophia of having “no balls” for not wanting to return to Hampton. She couldn’t stay home with Zora and him forever. Even if she did for now, “you’d still have to grow up, you’d still have to leave” eventually. Wait, when the heck did AJ become the voice of reason?!? 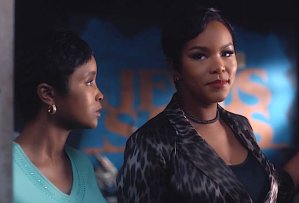 ‘IN THE SAME WAY THAT THAT AWFUL FRIDAY CAN BE CALLED GOOD, THIS VISIT HAS BEEN A BALM FOR MY SOUL’ | After Bishop reported to Grace that Lady Mae wanted to give Tara the house, his daughter replied, “How much do you need” to pay her off? “How much you got?” was his answer. Nearby, Charity phoned Phil’s father but didn’t seem to get a whole lot further than her sister had, even though, as the old guy noted, he gave her more than her allotted two minutes. Off the intel that she’d gotten from Noah, Grace made a beeline for the cabin, briefly consoled Zora, then transitioned to, “Yeah, your parents are all kindsa screwed up, can I see that journal already?” And with no trouble at all, she found it. Back at the main house, Lady Mae lit into Bishop for asking Grace for a handout. She wanted their new church — and life — to be “founded on truth and built sturdy like every simple, well-made thing.”

That being the case, Lady Mae was adamant. “We’re giving Tara the house,” she insisted. Bishop argued that she was “making me look like a murderer” by doing so. But she was about as swayable as a boulder in a river. Thankfully, Charity interrupted to invite them to join the family in coming to Calvary one last time. “We’re not going to say goodbye,” she clarified, “we’re going to say thank-you.” Once there, Bishop declared, “Let us seal up this tomb… and wait for our miracle.” He could handle being called a murderer after all. Jesus, he noted, “even let himself be called a criminal.” But when he and Lady Mae went to tell Tara that the mansion was hers, they were greeted by not only the would-be saint but… uh-huh — their worst nightmare, Tara and Basie’s half sister, Rochelle. So, what did you think of “The Fifth Day” — and Rochelle’s return? Hit the comments with your thoughts!