This recap contains spoilers from Episode 10 of DC’s Stargirl (which premieres new episodes Monday on DC Universe and Tuesday on The CW).

This week on DC’s Stargirl, while Barbara struggled to process her daughter’s super secret, Courtney untangled a family tie before embarking on a rescue mission for a semi-inanimate friend.

In a flashback to two years ago, we see how Barbara and Pat first met — both ordering, and ultimately sharing, a banana split at the diner in Blue Valley, where Barbara was selling her late mother’s house. Cut to the present and a far less sweet mood, as Barbara wonders, “What the hell is going on?!” in her basement, where Court is holding the glowing Cosmic Staff. Pat attempts a detailed download, but Court jumps in to claim that her father was a superhero until Jordan Mahkent killed him, and now she is claiming her birthright. Apoplectic, Barbara insists that Starman was not Courtney’s dad, before ordering the teen to her room. Babs then leans into “sidekick” Pat, contending that their marriage has been a lie. And once she confirms that Court was in no car accident, she sends Pat packing: “Get out of this house.”

Over at the hospital, we realize that Henry Sr. has no memory of the past 10 years — his wife Merry’s death, by drowning in a pool, included. But he discovers that Junior inherited his gift, and promises to help the lad navigate this frightening ability. When Sr. goes to sleep, Junior hears him thinking about “Merry… Starman… last day.” Junior dashes home to cue up Dad’s tape from the last day of his lab notes. “My wife is dead. Just like that,” Sr. remarks on the tape. He describes Merry, whom he met during a bank heist, as as “the girl of a thousand gimmicks,” and someone who stunned him with her pure thoughts” — to a degree that it made him question Jordan and the larger mission. But Jordan led the JSA to them, and the ISA killed the heroes, including Merry’s brother aka Starman! “I knew she would never forgive me,” Sr. said, and he hoped his missus would go into hiding. “But she didn’t,” he says, cursing out Jordan. “There are no more good thoughts to be found. Mary is dead.”

As Pat skulks off to crash at his garage, a concerned Mike insists on coming with. Meanwhile, the Cosmic Staff wakes up Courtney, but she rebuffs its invitation and orders it back to the crate. Instead, the staff zips over to Pat’s bulletin board with the ISA suspects and analyzes Icicle. Jordan himself meanwhile pays Sr. a visit at the hospital, saying that with Dr. Ito’s machine ready, all they need is his very special brainpower to reshape people’s thoughts en masse. The Cosmic Staff then shows up stag and tries to zap Jordan, but Sr. blocks it with his telekinesis. Frozen in its tracks, the staff is then literally frozen by Jordan, who then takes it and leads Sr. off to Dr. Ito’s lab to get his memory back. 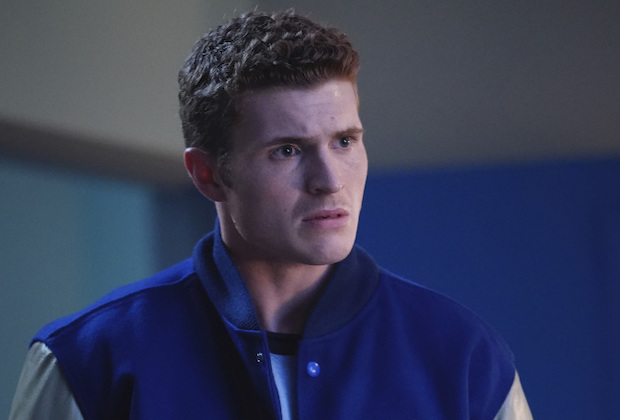 When Court realizes the staff is missing, she freaks out to her mom, but Barbara is having none of it. She reiterates that Starman was not her father, before announcing that they will be leaving Blue Valley soon as she gets back from the office. Alerted by Court, Pat asserts that he needs to get Barbara away from the American Dream building ASAP, so he runs over to her office. Courtney meanwhile has an awkward moment with Mike, who guilt-trips her over not sharing what is going on with their folks, before she heads into town and gets hailed by Junior. He relays all that he has learned — that his dad is awake, and his mom was Starman’s sister. “You’re my cousin?!” asks Court, before giving Junior a big hug. Junior reveals that Jordan has the Cosmic Staff, and that his dad doesn’t remember the past 10 years. Court wants her staff back, and Junior wants to save his Dad (believing that his mother was in the midst of turning him good), so they agree to team up.

Barbara is packing up her office some when she thinks to email Sam Kurtis about “Your Daughter, Courtney,” saying: “Please contact me.” Pat shows up a bit later to warn his wife, “You can’t be here” in “the most dangerous place in town.” Jordan just then swings by with his parents to drop off a ‘thank you” gift for dinner the other night. After they leave, Barbara reveals to Pat that she recorded the parents speaking in Norwegian. Over dinner at the diner, Barbara uses an app to translate the recording, which says in part, “Once the machine is on, everything will change.” Back at Barbara’s office, meanwhile, we see that Sam Kurtis has replied to her email….

After some deserved squabbling about allying with Brainwave’s son, Rick, Yolanda and Beth agree to suit up with Court and Junior and head into the tunnels. Once there, they split up, with Rick and Beth soon coming upon the cell holding Solomon Grundy — aka the thing that killed Rick’s parents. Court, Yolanda and Junior meanwhile arrive at Dr. Ito’s lab, where Sr. is strapped to a table and hooked up to some memory gizmo. While still-imprisoned Cindy fruitlessly begs to be let out and kill Stargirl herself (LOL), a fight breaks out between the teen heroes and Dragon King’s minions. The kids hold their own, leading Ito himself to enter the fray and take on Stargirl. But just when he goes for the kill, Yolanda breaks the Cosmic Staff free from its own cage and slips it to Courtney, who zaps her attacker. Angered, Dragon King rips off his mask, revealing his monstrous face. Junior meanwhile frees his dad… except Sr. already has his memory back, and is just fine with the sinister status quo. More so, he wants Junior to join him!

The kids bolt for the exit, only to eventually run into a set of prison bars. Rick, who had to be forced to give up on getting at Grundy, uses his strength to bend open the bars long enough for Beth to slip through, but then Brainwave shows up and uses his own power to close ’em up again. With an assist from Junior’s bean, Rick opens the bars back up and Hourman first slips through, after which Junior uses his power to force Courtney to go through next. Now alone on the bad side of the bars, Junior faces off with his father, but he is no match. After clarifying that it was he, and not Icicle, who killed Merry back in the day, Sr. chooses villainy over family once again and KO’s his kid with a barrage of rubble, before crashing the tunnel roof down on top of him. But not before Junior gets off a final “I am sorry” to ex-GF Yolanda.

What did you think of the episode “Brainwave Jr.”?