“You are the trailer park,” Beth told Roarke in Sunday’s Yellowstone. “I’m the tornado.” With those words, she marched into a war that he assured her that she couldn’t win. Even she agreed that money, not land, was the only real legacy left. But a fat bank account wasn’t the legacy that her daddy wanted, so come what may, she’d fight.

She wasn’t unreasonable, however. Though she intended to keep shorting Market Equities’ stock — Roarke made it too easy not to — she would at least do so after hours so he could get back to the river to torture trout. Read on, and we’ll go over everything else that transpired in “Cowboys and Dreamers,” from Kayce’s horse play to John and Thomas’ potentially game-changing meeting of the minds. 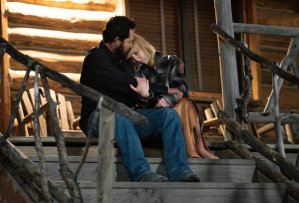 ‘HE’S ALL YOURS NOW’ | As the episode began, we flashed back to a tearful young Beth approaching Jamie for a ride to the Native American free clinic — she was pregnant. When the receptionist saw that he (and presumed that the patient) was white, she tried to send the kids to Planned Parenthood. Of course, if they went there, everybody in the valley would know; Jamie whipped out his driver’s license to reveal the surname that explained why. Still, the woman advised against Beth being treated at the clinic. “A requirement of receiving an abortion [here],” she pointed out, “is sterilization.” No problem, said Jamie, who then led in his sister without telling her. Afterwards, she lied to baby-faced Rip that the test had been negative and announced, “We shouldn’t do this anymore.” In the present, Beth awakened, apparently having dreamed the flashback for us. She didn’t want to discuss it with Rip, but when he pressed, gently, she admitted, “I made two decisions in my life based on fear, and they cost me everything.” Nuh-uh, he replied, stalwart as ever. “Not everything.”

The following morning, Jamie took his oath of office as attorney general with, I’d swear, an almost fetishistic gleam in his eye. “He’s all yours now,” John told Lynelle. When the governor suggested that Jamie thank his father for his lofty new post, he shrewdly replied, “I know why I’m here, and it wasn’t him.” From there, we cut to a field full of brood mares and their  foals, where a cowboy clutching a foreclosure notice blew his brains out. Boyd Nelson was his name, new Livestock Commissioner Kayce was informed by Sheriff Haskell, the deceased’s cousin. As soon as the death certificate was filed, he added, Boyd’s family would lose the horses as well as the ranch. What if, Kayce asked, they sold the horses quick-like to give Boyd’s kids a shot in life? “I’m not sure violating probate law should be your first act as Livestock Commissioner,” Haskell said. But he’d be only too happy to look the other way. 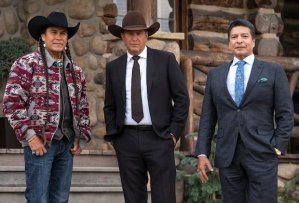 ‘WE WANT THE SAME THING — FOR VERY DIFFERENT REASONS’ | At Yellowstone, Chief Rainwater admitted to John that “I don’t want a casino any more than I want an airport.” The slot machines and roulette wheels were but a “wickedly ironic” revenue stream to fund his true goal — restoring the land to its natural state. Now, he and John could still have their turf war by and by, but “we’ll have nothing to fight over if they build a city here.” Rainwater’s solution? A corporation like Market Equities has only one enemy: time. So “we give them a dozen things that take time.” He’d already unleashed his secret weapon. (Hey, Angela!) “Well,” noted John, “I have one of those, too.” (Hey, Beth!) “I think they should meet,” the chief concluded. “Who knows what mischief they’ll come up with together?”

Meanwhile, Rip, Colby and Ryan found a coupla no-goodniks running buffalo through a field adjacent to Yellowstone. Punches were thrown, pistols drawn… the usual kinda pissing contest. In the end, the ruffians were allowed to ride off after sending a message for John: “Wade Morrow said hello.” Dun-dun-dun! (Wait, are we supposed to know who that is? Do you?) In any case, the purpose of the buffalo, Rip kindly informed us indoorsy types, was to tear the fence to pieces. Later, Kayce filled in John about his Boyd quandary. By which I mean asked his daddy what to do. John refused to do so but promised to back up his son no matter what he decided. Needless to say, Kayce decided to sell the horses and give the money to the dead dude’s family.

‘YOU BROKE A RULE THAT SHOULDN’T HAVE BEEN A RULE IN THE FIRST PLACE’ | As the hour neared its conclusion, Jamie, his glee nearly uncontainable, called Randy to gloat. Sorry, did I say “gloat”? He merely called Randy as the “highest-ranking law-enforcement officer in the state” to make sure he knew the attorney general was available to him, “if there are any unresolved issues that need resolving.” Were there? No, said Randy, his disdain palpable. That night, when Mia and pal Laramie brought Jimmy home to the bunk house, they helped themselves to the boys’ beer and started a party. When the guys and Teeter got there, it only got wilder. Laramie asked Lloyd to dance, Ryan tried to adjust his eyes to the sight of Jimmy with a woman as pretty as Mia, and Colby confessed that OK, he’d noticed that Teeter had some dance moves, like maybe she’d had training. “Where the f–k did she study dancing?” laughed Ryan.

Perturbed by the noise ruining his sunset, Rip went over to break up the party… only to find Beth right in the middle of it. At the main house, John ended his day as he so often does — by praising Kayce for his awesomeness. (Honestly, it’s a wonder the guy’s head hasn’t swelled to a size that he can’t fit into a Stetson!) When the younger Dutton suggested that they go join the party, the older one passed; he’d never been able to lead someone and be their friend. “Maybe it can be different for you.” Ooor… maybe not. Rather than mosey on over, Kayce plopped himself down on the porch. So, what did you think of “Cowboys and Dreamers”? Hit the comments with your observations.