But for fans of the macabre, elaborate period costumes and/or Dakota Fanning’s verbal takedowns of men who underestimate her, the TNT crime drama made a welcome return on Sunday night. Before you give us your thoughts on the first two Angel of Darkness episodes — by the way, Season 2 will roll out with back-to-back episodes every week — let’s recap what happened in the grisly premiere:

‘EX ORE INFANTIUM’ | Episode 1 begins at New York City’s Lying-In Hospital, where a new mother named Martha Napp wakes up to find her baby daughter isn’t sleeping next to her. Martha zig-zags through the maternity ward, trying to find her child, but she’s stopped by multiple nurses who tell her the baby is fine. As they try to restrain Martha, she spots Dr. Markoe, who has just finished delivering a baby. “You know I know what happens here! I’ll call the police!” Martha tells him, but the nurses successfully wrestle her to the ground.

A few weeks later, Martha is somehow facing the electric chair: She was put on trial for killing her daughter — despite the fact that the child’s body hasn’t been found — and sentenced to death, even after Laszlo Kreizler tried his best to defend her. On the day of Martha’s execution, Laszlo speaks to her one more time, promising to find her still-missing daughter. He then watches in horror — alongside Sara Howard, now running her own private detective agency, and John Moore, now a reporter for The New York Times — as Martha is electrocuted, despite Sara’s last-ditch effort to shame the police into sparing her.

Following Martha’s death, Sara offers to help Laszlo as he searches for the missing child, but she’s soon caught up in a new investigation of her own: Ana, the infant daughter of a Spanish dignitary named Narciso Linares, is kidnapped while her mother is in the bath, replaced in her bassinet by a baby doll whose eyes and mouth have been scratched out. (File this under “Visuals We Didn’t Need to See, But Could Have Just Had Described to Us.”) 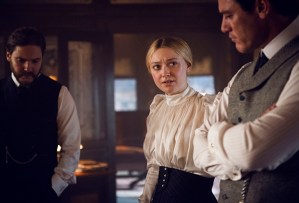 Ana’s mother, Isabella — who is utterly traumatized after finding that doll in her daughter’s bassinet — initially wants Laszlo’s help investigating the kidnapping, much to Sara’s disappointment. But Sara, as if you’d expect anything less from her, advocates for herself eloquently. “You need a detective, Señora. And a woman, such as I, with the resources and the experience,” Sara urges Isabella. “I see your pain. I see your suffering, and I care. I care deeply.” And just like that, she’s hired!

Elsewhere in New York City, a young girl named Eloise joins her mother on an errand at the Siegel-Cooper department store. Eloise peels off to look at the store’s display of dolls… and when she picks up one of them, she’s horrified to find it’s a real baby, with eyes drawn over its closed lids and blood spilling out of its mouth. (Another one for the “Didn’t need to see that!” tally.)

Sara and Moore meet up at Siegel-Cooper, where Sara reveals to him that this dead child could very well be Ana Linares. After consulting with the Isaacson brothers, who investigate the corpse and suspect the baby was poisoned, Sara admits that Laszlo’s input on this case might be helpful. The team then convenes at the Isaacsons’ lab, and Laszlo is able to identify — based on the presence of a specific contusion on the baby’s body — that this child is not Ana Linares, but Martha Napp’s missing infant.

“Who could have done this?” Sara asks, particularly interested in the eyes that were drawn on the child’s lids, not unlike the way it’s done in posthumous portraits. “A person in great pain, retreated into themselves, alone in the desolation,” replies Laszlo, ever the optimist. And when Moore ominously adds that “baby Ana is at their mercy,” we see that the Linares child is still alive in an unspecified location somewhere… but she’s being kept in a crib with a cage over the top.

‘SOMETHING WICKED’ | Next up, in Episode 2, Moore receives permission from his Times editor to investigate the case of these missing children, assuming there’s any link between Martha’s baby and poor Ana Linares. This means he’ll be spending a lot more time with Sara, which is much more complicated now that he’s engaged (!) to a woman named Violet… who also happens to be the daughter of William Randolph Hearst, publisher of the New York Journal. What could go wrong?

As the second hour unfolds, Sara, Moore and Laszlo split their time between investigating Dr. Markoe — that shady OB-GYN at the Lying-In Hospital — and interviewing the staff at the Linares’ home, hoping to get some clues about what happened to Ana. The investigation isn’t going swimmingly, though: Dr. Markoe is less than thrilled that Laszlo wants to take down his hospital, and he leans on former police commissioner Thomas Byrnes (ugh, him again) to put the kibosh on Laszlo’s meddling. Meanwhile, the interviews with the Linares staff don’t yield many answers, and Isabella is still too traumatized to recall what happened the day Ana was kidnapped. (Laszlo suggests hypnotizing her to help jog her memory, but that’s a no go.)

There are some new revelations, though. For one, the Isaacsons find that Martha Napp’s daughter was poisoned, but there were also traces of an antidote in her mouth, which suggests her killer quickly changed their mind about poisoning her, then smothered the child instead. Meanwhile, Sara and Moore pay a visit to Siegel-Cooper and find that a customer with the initials E.H. had purchased the very doll that was used to replace Ana Linares in her crib. What’s more, E.H. bought that same doll four previous times — and he or she provided an address the first time they purchased it. 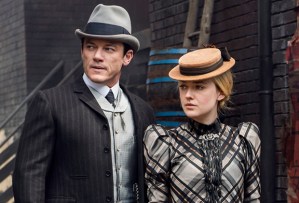 The address in question leads Sara and Moore to a seedy part of the city, where they encounter members of a gang called the Hudson Dusters. The Dusters are quite clearly people you don’t want to cross — they recently killed two men with whom they had beef, and the brutally dismembered bodies are recovered in the Hudson River — but Sara and Moore have questions for their leader, Goo Goo Knox.

When Sara and Moore meet Goo Goo the next day, he denies knowing anything about a missing baby, even though he owns the property that Sara and Moore saw listed in Siegel-Cooper’s records. (Meanwhile, at the unspecified location where Ana Linares is being held captive, someone takes her out of her crib-cage and brings her over to a cabinet, where it looks like bottles of poison are stashed inside.)

The episode ends with two alarming scenes: First, a choked-up Isabella shares a previous incident involving baby Ana, in which Ana had rolled off the bed and fallen to the floor while Isabella was out of the room. Ana was ultimately OK after the fall, but she spent a few days in the hospital for observation — and though we don’t hear Isabella say the name of the hospital, it’s implied that the Lying-In is where Ana stayed.

Second, while Sara and the team try to understand why Goo Goo Knox might be stealing babies — and, if he’s simply stealing them for money, why go through the theatrics of replacing the babies with dolls? — the Isaacsons share that one of the poisons found in Martha Napp’s child isn’t easily accessible in an apothecary. Rather, it’s a pain suppressant that could be deadly if administered improperly… and it’s most commonly found in maternity wards.

That’s when the action moves to the Lying-In, where Dr. Markoe is delivering the baby of a woman who’d been sleeping with an important, high-society man in the city. The woman is clearly in terrible pain during labor, but Markoe notably refuses to give her that pain suppressant. Even worse, once the baby is delivered, Markoe seems prepared to do a second operation on the woman; as he grabs a sharp-looking medical instrument from the table, he says to the matron, “There’s still work to be done.”

“What will I tell her when she wakes?” the matron asks, gesturing to the woman who has since passed out after delivering her baby. “It would be kindness to tell her the child didn’t survive,” Markoe replies — even though the newborn in question is very much alive.

OK, your turn. What did you think of The Alienist’s sophomore premiere? Grade it in our poll below, then hit the comments with your reactions!