Cursed‘s Nimue is running out of options. The Pendragons and Red Paladins have surrounded her city, while the Ice King’s raiders wait for her on the coast. And that is just outside the walls of Gramaire. Inside, unrest is brewing between the humans and Fey. Can the young queen hold it all together?

Read on for a recap of “The Sacrifice.” 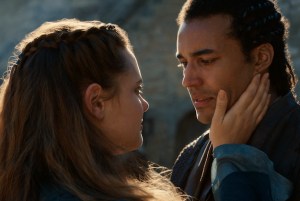 BLOOD PAYS FOR BLOOD | Still on her crusade to murder Nimue, Iris steals some deadly weapons from the town armory, killing and burning the body of its Fey guard in the process. The fire interrupts Nimue and Arthur’s absolutely adorable pillow talk (“Do I snore?” the young queen asks. “Like a Viking horn,” Arthur jokingly replies without missing a beat), who go examine the scene. The crime is incorrectly attributed to the Fey Elder Wroth, who is labeling anyone who flees to the desert kingdoms as a traitor.

Arthur goes to see Wroth to end his alleged mutiny. Despite not being responsible for the fire, the chief of the Tusks has taken over part of the city and refuses to recognize Nimue as his queen. Arthur scolds him for his selfishness, even offering his hands as blood payment for Nimue’s cutting off Wroth’s warrior’s hands in the previous episodes. The chief spares Arthur’s hands, but is impressed by his foolish bravery and agrees to leave for the desert kingdoms with the rest of the Fey.

FACE-TO-FACE WITH DEATH | Roaming the castle looking for Nimue, Morgana runs into the Widow and realizes that she has come for her friend. The Widow warns Morgana against interfering, leaving just before Nimue arrives. Not wanting her sword to fall into the hands of Uther, the Red Paladins or the Ice King, Nimue gives the sword to Morgana for safekeeping and instructs her to flee the castle before anyone notices. She then shares one final goodbye with Arthur and Pym before sending them off to the coast to meet the boats.

At the Red Paladins’ camp, the Weeping Monk’s doubts about his path continue to grow. “His Grace. I cannot feel it. I call out to him. I reach out and there is only darkness,” he laments to Father Carden. However, the paladin chief has no patience for these questions, reminding the “demon-born” that he has forsaken his Fey brethren and that he never wants to discuss the matter again. 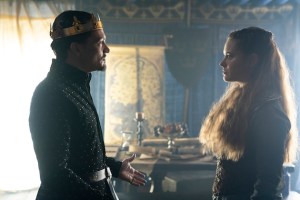 KEEP YOUR WORD | Merlin rides to Uther’s camp ahead of Nimue to try and get a read on whether the king will betray her. Merlin nearly sweet-talks the king into his grasp but slips up by revealing that he knew about Uther’s mother’s ruse and the midwife. Furious, Uther has his guards stab Merlin and toss him into an abandoned tent.

Back at Gramaire, Iris sneaks into the castle and waits for the right opportunity to kill Nimue. Before she can sneakily strike, a note from Arthur arrives, informing the queen that they are boarding the Pendragon ships. Keeping her word, Nimue leaves Gramaire for the Pendragon camp to turn herself in.

On the run, Morgana runs into undead Celia. She refuses Celia’s request to bring the sword to the Cailleach and runs off to find Nimue. However, when she arrives at Uther’s camp, she is attacked by the Widow.

Nimue arrives at the king’s camp without the sword, coming face-to-face with Uther and Father Carden. She tells the men than the only way to get the sword is if the Red Paladins free Gawain and Squirrel. Going against Carden’s advice, Uther keeps her under his guard while he considers her offer.

Meanwhile, as Arthur and the Fey prepare to board the boats, they are attacked by Cumber’s daughter Dagmar and her Viking raiders, who are now in alliance with the Red Paladins. Wroth is killed in battle but, just as all hope seems lost, Red Spear and her men arrive, saving the Fey and killing Dagmar.

ONE LEGEND ENDS, ANOTHER BEGINS | Back in Uther’s camp, the king acquiesces to one of Nimue’s demands and bring her the dead body of Gawain. Unable to control her grief and anger, Nimue lets out a powerful blast of magic, which envelops the Green Knight in vines and grass, returning his body to the dirt from whence it came.

As for Squirrel, the reason Uther’s knights cannot bring him to Nimue is because, as Brother Salt is about to torture the young boy, the Weeping Monk arrives and saves him. The two are confronted by the Trinity Guard but, with a little help from Squirrel, the Weeping Monk is able to kill them all and escape. As the two ride off, the Weeping Monk gives up his Red Paladin persona, revealing to Squirrel that his true name is Lancelot.

LADY OF THE LAKE | Fed up with the king’s unwillingness to act, Father Carden attacks his camp and captures Nimue. As he raises his sword to strike her down, Morgana, who killed the Widow in their earlier confrontation and stole her powers, hands Nimue the Sword of Power, allowing her to decapitate Father Carden. The two locate Merlin and flee the camp, arriving at a waterfall.

But they have not escaped danger just yet. Iris, who was following them the entire time, shoots Nimue with several arrows, seemingly causing her to plunge to her death into the lake down below. Furious, Merlin grabs the sword, which restores his magic. He attacks Iris but is distracted by a group of paladins, whom he easily destroys before disappearing in a bolt of lightning with Morgana and the sword. Iris survives, though, and is knighted as the newest member of the Pope’s Trinity Guard for killing the Wolf-Blood Witch.

Now it’s your turn. Grade Cursed‘s finale — and Season 1 on the whole — via the polls below, then hit the comments with your thoughts!