“Whosoever wields the Sword of Power shall be the one true king.” But what if the Sword chooses a queen?

That is the premise of Netflix’s new fantasy series Cursed, based on the book of the same name by writer Thomas Wheeler and illustrator Frank Miller, the comic writer behind The Dark Knight Returns and 300. The series tells the story of King Arthur through the perspective of Nimue (13 Reasons Why’s Katherine Langford), a young woman who is destined to become the Lady of the Lake, a powerful figure in Arthurian mythology.

THE NEW SUMMONER | When we first meet Nimue, though, she is an outcast, shunned by her village and abandoned by her father after a mysterious incident left her “cursed” (hey, that’s the name of the show!) with the ability to communicate with the spirits of nature known as the Hidden. The only people she can count on are Squirrel, a young boy who runs around the village committing petty thievery, and Pym, her best friend.

Then there is Nimue’s mother, Lenore (Versailles’ Catherine Walker). As the village’s high priestess, Lenore has done all she can to protect her daughter from the cruel villagers and her powers. However, after the Hidden unexpectedly choose Nimue as the new village leader, the Elders reject her, prompting the distraught young woman to flee her home with Pym by her side.

WELCOME TO HAWKINS HAKWBRIDGE | The two arrive at Hawksbridge where, despite Pym’s objections, Nimue plans on taking a boat to the desert kingdoms and starting a new life. However, her plan is foiled when she learns that the ship left a week early and won’t return for another six months. As the two prepare to leave town, they run into Arthur (Barry’s Devon Terrell), a fast-talking sellsword who clearly has a thing for Nimue. He invites the women for a drink, which is quickly ruined by Arthur’s boorish mercenary partner, Bors.

Nimue challenges Bors to a game of dice, despite Arthur’s warnings that the pieces are weighed in Bors’ favor. However, Nimue uses her magic to win the game, shocking everyone around her. However, Nimue gets ahead of herself, and Bors discovers that she is a witch, which is punishable by death. She and Pym flee the town, but not before attracting the attention of the Red Paladins.

FAITH VS. MAGIC | Who are the Red Paladins, you ask? Led by Father Carden (Ozark’s Peter Mullan) and the Gray Monk (Fear the Walking Dead’s Daniel Sharman), the religious zealots have been going around the country terrorizing and slaughtering the Fey, mystical beings such as witches and fairies who just want to live their lives in peace. The Red Paladins see them as an affront to the natural order of God, placing Nimue and her village right in their crosshairs.

The only one capable of stopping Father Carden is King Uther Pendragon, but he is paralyzed by his own incompetence and a drought that has decimated the national food supply. He summons Merlin the Magician (Vikings’ Gustaf Skarsgård) to help end the hunger, but the wizard is a drunk, a debtor and, unbeknownst to Uther, seemingly has lost his magic.

Just because Merlin may have lost his magic, though, does not mean he can’t read the magical signs. As he is leaving Uther’s throne room, the Fey wizard notices a circle of dead doves in one of the castle towers. Taking this as an ominous portent, he races to town and finds a stillborn baby with three faces, confirming the arrivals of a magical child and a great war.

GOD’S WORK | Back on the road, Pym and Nimue barley escape the Red Paladins, but not before Arthur catches up with them. With the sun setting and the evangelists guarding the roads, the three agree to make camp for the night in the forest. Nimue and Arthur continue their flirtationship, but before anything can happen, Nimue has a vision of herself drowning with a sword and collapses, just as Merlin wakes up from, presumably, the same vision.

Nimue wakes in the morning, and she and Pym ride off without telling Arthur. However, when they arrive home, they find the Red Paladins burning and slaughtering everyone and everything. The two friends are separated as Nimue stumbles through the carnage, but she eventually finds Squirrel, who she helps escape, and her mother, who is injured in the temple of the Hidden. Sensing she won’t make it out alive, Lenore gives her daughter an item wrapped in a gray cloak and tells her to deliver it to Merlin. However, before she can give her any more information, a Red Paladin arrives, and Lenore sacrifices herself so Nimue can escape. 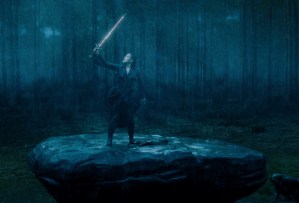 THE SWORD OF POWER | Back at castle Pendragon, the land finally sees rain as a heavy storm ravages the area. The rain brings much delight to the king. However, his happiness turns to anger and fear when he realizes that the storm does not bring floods of water, but buckets of blood. Merlin does not fare much better and gets zapped by a bolt of lightning, burning the silhouette of a sword on to the side of his body.

Nimue escapes into the forest, but the Red Paladin’s wolves are not far behind. She barely makes it to an elevated rock, buying her some time. When all seems lost, she notices a glimmer from the cloak her mother gave her. Nimue removes the cloth to reveal a glowing sword that emits great power. The weapon’s energy flows through her, allowing her to dispose of the wolves quickly despite having little-to-no sword training. It appears a queen has been chosen.

Now it’s your turn. Grade Cursed‘s premiere via the poll below, then head to the comments to let us know what you thought!