The hill of Austria are alive with freezing temperatures, treacherous terrain and enough snow to bury a dead body, and when this season’s Challenge finalists hit these slopes, you can literally see the trepidation strewn across their faces.

What pain and death-defying tasks lie ahead, and who snatched the big money? Let’s recap!

Cory’s competition isn’t going to give up so easily, though. Bananas is looking to secure his seventh win in his 20-season career, while Rookie of the Year Fessy’s looking to make a huge statement, as well.

On the ladies’ side, Melissa tells us she wants to win to help repay her dad for always supporting her. Bayleigh, always a ray of sunshine, throws massive shade at the Brit, telling us she doesn’t think Melissa stands a chance. “I think she’s just doing the final more for bragging rights than for actual competition,” the rookie said, but OK, go off.

Day 1 of the final comes and the challengers are relocated to a freaky, middle-of-nowhere tundra. TJ announces the prize breakdown: The top male and female each will win $500,000. There are zero payouts for second place; it’s all or nothing. The players will be climbing over 9,000 feet in elevation, while trekking through 12+ miles of deep snow. As our host often says on this show: This challenge is no joke.

For the first checkpoint, players must strap on skis and collect wood, then ski through a valley to dump them in their fire pit. After collecting 12 logs each, they must start a fire in order to continue, but seconds in, the players are already struggling in the knee-deep snow.

“You can run on the street all you want… but until you’ve run in 4-feet-deep snow, you have no idea what this is like,” Rogan says.

We may not know what it’s like, but it’s definitely amusing watching challengers who’ve never skied before take nasty spills, like Bambi taking his first steps. Cory says he was born and raised in snow, which makes it slightly confusing that he’s carrying both the logs and his skis. (They go on your feet, dude!)

Fessy and Cory are the first two to attempt a fire, and Fessy blazes up and takes the lead. Jenny is the first female to get hers going, but Kaycee isn’t too far behind. Since Cory and Jenny are the first ones to cross the checkpoint finish line, TJ declares they’ll be the season’s last Tribunal (say what, now!?). One man and one woman are about to be eliminated.

The players are then told to hike up to a compound that’s at the tippy-top of a brutally steep mountain. They traverse a dangerous via ferrata, strapping in to a cable to get up the massive, frozen rock faces. At one point, they navigate a tightrope walk over a mountain gap that looks super gnarly. At the top, Rogan volunteers himself as tribute for elimination, as does an exhausted Melissa. Jenny then picks Kaycee to go in, while Cory selects Bananas.

Melissa then writes her name at the top of TJ’s s–tlist… by quitting. We all know how much TJ hates quitters, but in this scenario, Melissa is right. She doesn’t stand a chance against Jenny and Kaycee, and the look on the poor girl’s face is already so defeated. (She was also unknowingly pregnant at the time, so it’s hard to blame her for not having the energy to push through.) 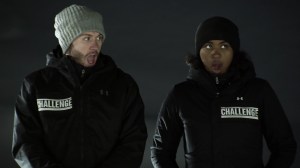 As for Bananas and Rogan, they’re playing Knock Out. At TJ’s start, they must race to the center of a ring and jump up to ring a bell, but the depth of the snow makes it more difficult than it sounds. Bananas wins the first two rounds, thus, knocking Rogan out of the game for good. The day’s winners — Bananas, Kaycee, Jenny and Cory — get a nice, warm room inside the compound. The rest of them are spending one uncomfortable night outside.

Bayleigh tells TJ through tears that she thinks she pulled her MCL skiing, so instead of suffering through the night, she bows out. After six hours trying to awkwardly sleep on large metal barrels, Kyle and Fessy are allowed inside, but there’s no question the lack of sleep will put them at an extreme disadvantage come Day 2.

The last portion of the final is a good ol’ fashioned leg race. With a head-start, Cory and Jenny arrive at Cory’s worst nightmare: a math puzzle. Fessy makes up time by easily completing the equation, but Bananas is hot on his tail. Jenny beats Kaycee and takes off, leaving the Big Brother winner to struggle with basic, elementary-level mathematics. Sigh.

Fessy gasses out and loses his lead, while Kaycee times out on the puzzle. Before she has a chance to catch up, Jenny and Bananas seal the deal to become the newest Challenge winners and the recipients of those two $500,000 checks. Kyle, Cory and Fessy finish in that order, with Kaycee eventually finishing second for the women.

Did the right players win, and what did you think of this season’s red skull twist? Grade the finale and season below, then sound off in the Comments!