There’s no question that Betty Broderick did the crime. But the Season 2 finale of Dirty John is more concerned with whether she’ll do the time.

On Tuesday’s episode of USA Network’s true-crime anthology, Betty stands trial for the murders of ex-husband Dan and his new wife, Linda, which she doesn’t deny committing. Now that a jury is deciding her fate, though, it’s less a question of whether Betty did kill them, and more of whether she meant to kill them.

Much to Betty’s delight, her first trial ends with a hung jury. Sure, she seems a little nervous on the stand, and prosecutor Kerry Wells throws some curveballs during cross-examination — for example, if Dan Broderick were really such a monster, why would he voluntarily send Betty support checks, when he didn’t have to pay her a dime? — but Betty emerges relatively unscathed. Plus, if the hung jury weren’t reassuring enough, Betty is receiving dozens of letters from women who’ve heard her story and support her wholeheartedly. She gives a few juicy quotes to news outlets, too, and the letters continue to flood in, along with candy, cigarettes and bizarre gifts like a cross-stitch that reads, “Free Betty Broderick so she can kill another lawyer.”

Despite her attorney’s advice not to let the fan mail make her too confident, Betty seems convinced that her second trial will end with a hung jury, too. She doesn’t seem worried by her lawyer’s prediction that Kerry Wells will really grill Betty the next time she’s on the stand; instead, she does more interviews with the press, makes unhinged prank calls to her girlfriends in which she claims to have escaped from prison, and generally seems content to live in her own world.

Of course, if you’re at all familiar with the real Betty’s story — even just a glance at her Wikipedia page! — you already know she should have heeded her lawyer’s warnings. At the second trial, the prosecution cuts deep, bringing Betty’s former friends and two daughters on the stand to spill about how obsessed Betty had become with Dan and Linda. (“Did you have any question in your mind that [Dan] loved you?” Kerry asks Betty’s older daughter, Tracy. “I knew he did,” Tracy responds, tears in her eyes.) 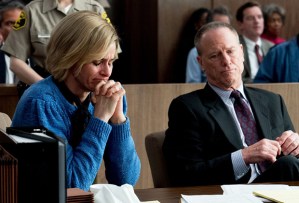 But Kerry’s cross-examination of Betty is particularly brutal the second time around. Despite Betty’s insistence that she was out of her mind with heartache and anguish the night she killed Dan, leaving her out of control of her own actions, Kerry isn’t buying it. After all, she asks, didn’t Betty make a conscious decision to visit Dan and Linda’s house that night, rather than go to the beach where she allegedly planned to take her own life? And if Betty claims that she only pulled the trigger on her revolver because she “tensed up” upon entering Dan and Linda’s bedroom, then how did she manage to shoot the gun five times? (Changing her aim halfway through to kill Dan after Linda, no less.) And, if she didn’t mean to kill them both, why did she go out of her way to unplug the phone in Dan and Linda’s bedroom, ensuring they couldn’t call for help?

The prosecution’s questions are endless, each one seemingly confirming that Betty did plan to kill Dan and Linda that night. And though the jury is nearly deadlocked for a second time — there’s one female juror who later confesses she was the holdout — they eventually come to a verdict, finding Betty guilty of second-degree murder for the deaths of both Dan and Linda. In fact, that one juror who didn’t want to convict? She was under the impression that Betty would only get a few years in prison if she went away for second-degree murder instead of first-degree… and she’s crestfallen to learn that even second-degree murder could potentially earn a life sentence. (Um… oops?)

In the end, Betty is sentenced to 15-years-to-life for each count, and she’s whisked off to prison after an emotional goodbye with her daughters. The last time we see her, she’s giving another phone interview, wistfully remembering the songs she and Dan used to dance to when they were dating. As she sings a verse of Johnny Mathis’ “The Twelfth of Never” over the phone, we see Betty sitting alone in her cell later that day, staring at a vision of young Dan that she sees in the corner. For a moment, she envisions what life would have been like if things had unfolded differently: if she hadn’t freaked out when Dan sold the Coral Reef property; if she’d actually shown up to that divorce hearing rather than missing it altogether; if she hadn’t left her kids on Dan’s doorstep the day she found that rat infestation; if Dan had admitted he was in love with Linda the first time Betty asked if he was cheating.

But in the present day, Betty just continues to stare at the corner of her cell — where adult Dan and Linda are now appearing before her — and finishes her song before hanging up the phone.

OK, your turn! What did you think of Dirty John‘s sophomore finale? Grade the episode in our poll below, then hit the comments with your full reviews!