This week on DC’s Stargirl, the Whitmore-Dugans hosted a super-special dinner guest, while Henry Jr. “went to the videotape” to learn all about his dad.

Starting off with a flashback to “Decades Ago,” we see a younger, mop-topped Henry King Sr. toiling away in lab, shortly before he is confronted in the parking lot by a gun-wielding mugger. Almost magically, the man’s gun flies across the parking lot, after which the mugger himself doubles over in excruciating, brain-bleeding pain. Returning to his lab, Henry Sr. hits record on a video camera and reports, “I think I killed a man tonight….”

We jump forward to the present, where Henry Jr. is back in his father’s secret room. The lad grabs and cues up a “Day 1” tape in a video player and lays witness to the aforementioned lab report. Henry Sr. details how his “theoretical methods on expanding cerebral capacity” were deemed “too extreme” by his bosses, so he began secret trials — on himself, after which he was able to read the mugger’s thoughts as well as trigger that deadly seizure. Even stranger, Sr. shares that he felt relief after ending the man’s suffering. Thus, he declares his trial a success!

Courtney meanwhile recalls for Pat how during her second skirmish with Cindy, Henry Jr.’s thoughts were in her head — and she could tell he was scared, lonely, confused and sad… so, not like Cindy or Henry’s supervillain father. Court thus wants to recruit Henry, see what he might be able to tell them about the ISA, but Pat is iffy. After all, Pat explains, the “best case scenario” was that the ISA simply came to Blue Valley to lay low after whacking the JSA. But if the nefarious Dr. Ito (aka the “beyond human” Dragon King) is in cahoots with the baddies, they must be planning something. Pat shares that pre-JSA, he and Sylvester were a part of the Seven Soldiers of Victory, along with “Robin Hood,” Vigilante, the Crimson Avenger, Wing and… “a knight”. Back then, they stopped Ito from building a weapon to destroy New York. So yeah, Court decides, the good guys could use Henry. But when she loops in the others, both Yolanda (who has her own history with her ex) and Rick think she’s crazy.

Henry Jr. plows through more and more videotapes, testing his own telekinetic powers along the way. On one tape, Sr. tells a tale of how as a boy, he lost a ball down a well — and his father then dangled him by the ankles, above the dark chasm. Sr. said that he had felt powerless ever since… until now. He then related how he sensed a sad man on the subway, so he gave him a telekinetic “push” onto the tracks. Again, Sr. felt better because of the death… until he picked up on another stranger’s vile thoughts. “At their very core, people are monsters,” Sr. said on the tape. “And I hate them.” Junior then “hears” his Dad call for him, so he heads to the hospital, where at Sr.’s bedside he wonders, “Did I inherit my powers from you? Can I help you?”

Dr. Ito, having locked up Cindy in his lab (the “cover story” is that she traveled overseas with her stepmother), marches down the hall to assure the ISA that he is their ally in Project New America, and to that end his device is nearly ready — because they no longer need to wait for Henry Sr. to wake up, and instead can broadcast Junior’s power across six states, taking control of every mind to create a new America… “our America.” 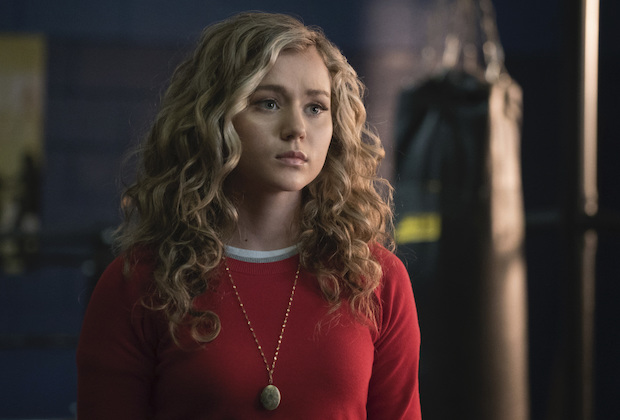 Courtney shows up at the hospital, assuring Henry in the wake of her clash with Cindy, “I don’t want to hurt you like I did your dad.” She explains that Sr. had plans to kill both her and her mom, and invites Henry to “help me know more” about who else is in the ISA, so they can stop killing people like Joey and his dad. Junior sniffs, “Maybe they all deserved it,” believing that if his dad hurt anyone, “he had a reason.” (After all, ” People are monsters.”) When Court contends that Henry just wants to love and be loved, hence him being at the bedside of a man who treated him so badly, Junior makes the room tremble and urges Courtney to “get out of here!” Shortly thereafter, Yolanda shows up as Wildcat, warning Henry to steer clear of Courtney and her family, asserting that while Court may think his soul can be saved, she knows better, having been betrayed by someone she loved.

Later at the Whitmore-Dugan home, Barbara is boiling chicken for eight, because Jordan Mahkent and his family are coming over. Pat reiterates to his wife that he must tell her something, but Courtney interrupts, as does the doorbell. Courtney is surprised to realize that along with Jordan and his (secretly sassy!) parents is Cameron — as in Jordan’s son! The Mahkents kick off the supper by saying grace in Norwegian (that, translated, was a bit ominous), after which Jordan asks Pat why he chose to move to, of all places, Blue Valley. Pat cites the town’s good values, plus the fact that Barbara used to live here. And though Blue Valley wasn’t “perfect” back then, Barbara hints, the American Dream can use it as an example of how to do better.

All is going well enough until Courtney fetches a piping hot casserole dish of chicken dumplings from the oven… and yet Jordan unwittingly handles it with his bare hands. Court quickly huddles with Pat to share her theory that Jordan is Icicle — and worry that, like Cindy, Cameron is evil, too. As such, when Cameron in saying goodbye suggests that he and Court do something together soon, she offers a tentative “sure.” Jordan then says privately to Courtney, “You do know why I was really here, don’t you…?” Because…. he had to meet the girl his son talks so much about!  “And I approve.” (Whew.)

That night, in the basement, when Courtney pulls out the Cosmic Staff and suggest to Pat they use it to find out if Jordan is Icicle, Pat reminds her that they will do nothing more until Barbara knows the whole truth. And speaking of Babs, she just came downstairs — to see her daughter wielding the glowing Cosmic Staff!

*The mysterious school janitor at one point was regarding his mop handle when it transformed into the Cosmic Staff — and then, after he dropped it in surprise, it changed back again.

*Tasked by Pat with researching the network of tunnels the ISA uses, Beth learned that Blue Valley had been settled by freemasons who were out to “create a community free of interference from the outside,” where they could do what they want while hidden.

*Henry Jr.’s hospital visit ended with the family lawyer showing up to claim that per Sr.’s pre-established wishes, his time on life support time is up. Henry senses that the man is lying/scheming to steal money from the family, so he triggers in him a deadly seizure.  “Junior…?” remarks Sr. from across the room, suddenly conscious. “What’s going on?”

What did you think of the episode “Brainwave”?