This Wednesday on Marvel’s Agents of S.H.I.E.L.D. (ABC, 10/9c), Yo-Yo’s power is desperately needed, so she and May embark on a field trip to a very familiar place — Afterlife, where they hope to divine why Elena can’t seem to “yo” no more.

TVLine hopped on the phone with Natalia Cordova-Buckley and Ming-Na Wen to preview the ladies’ very strange “spa day,” during which one of the real-life BFFs learned just how physically “feisty” the other can be!

TVLINE | If last week was “The Totally Excellent Adventures of Mack and the D,” how would you title this week’s “MaYo” episode? “The totally ____ adventures…”
MING-NA WEN | [Laughs]
NATALIA CORDOVA-BUCKLEY | The total weird adventures.
MING | “MaYo’s Spa Day.” Or better yet, “MaYo’s Spar Day”!
NATALIA | That’s what it would be! Because when badass women go to the spa, they spar. That’s how they relax.

TVLINE | Will this episode fill in some blanks on what those on the Zephyr were up to after stranding Mack and Deke?
NATALIA | Well, what was two years for Mack and Deke was just minutes for us. This is more about filling us in on Yo-Yo’s lost power and May’s new power, where she can feel people’s emotions.
MING | Yeah, the writers gave May a superpower that she would absolutely hate. [Laughs] She doesn’t even want to deal with her own emotions. Those writers, so clever.

TVLINE | What are the ladies up looking to accomplish on their trip to Afterlife circa 1983?
NATALIA | As you know, Yo-Yo hasn’t been able to use her powers, and she thinks it has something to do with the Shrike going into her. But on this adventure, she is sent to see Jiaying (returning Season 2 guest star Dichen Lachman) to help with her powers, and we’re going to see her — as Agents of S.H.I.E.L.D. very well put it in a tweet the other day — “confront her past to be able to move into her future,” which I think is a wonderful episode for what we’re going through right now in the world. We’re all trying to look into what we’ve done and shift our consciousness.

So yeah, Yo-Yo is having to for the first time really get personal about herself. She’s always been an agent whose personal struggles are hidden away, and that’s why I love the combination of May and Yo-Yo. They’re both very secretive about their personal stuff, they’re very mature, grounded women, and they’re very team-driven — and this time they get to team up, which I love, and find answers. And May is a great guide for Yo-Yo, since she has had a lot of hardships in her past. There is a lot of reflection there, by Yo-Yo as someone younger really looking up to an agent who has gone through it all.
MING I I also love how even though in some way May is S.O. to many of the agents, I think with Yo-Yo there is also a sense of equal ground between the two of them. There is a great deal of respect and maturity between the two women that, for May, is more about helping as a friend more than being her coach. She’s definitely there for Yo-Yo on a more personal level. 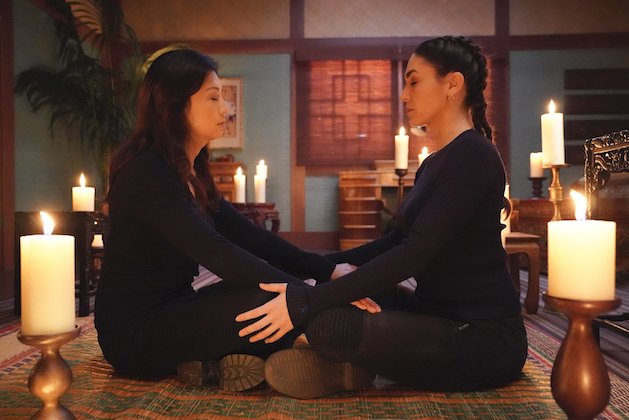 TVLINE | Ming, what was it like being back on the Afterlife sets after all these years?
It was great! It was fun to see Dichen [Lachman] again, and work with my old buddy Byron Mann — we worked on Street Fighter another lifetime ago. [Laughs] It’s so rare to be on a set with that kind of diversity, and also to be on a set where you’re just hanging out with friends and doing some really cool stuff. It was nice to be back in Afterlife. It’s a really lovely location — though a little bizarre sometimes!

TVLINE | Speaking of Dichen Lachman — she looks 30 years younger for this storyline probably without a dab of makeup.
MING | Right?!
NATALIA | Yeah, Dichen, Ming and Henry all suffer from a disease called They Don’t Age.

TVLINE | Though you are already very good friends, did the two of you learn anything new about each other while filming this storyline?
NATALIA | I think Ming learned that I am crazy when it comes to fight scenes.
MING | Oh my gosh. This girl is soooo enthusiastic about it. [Laughs] Natalia is feisty, man. She’s a dancer, and she’s got these kicks that go up and into the sky…. I was like, “Whoa, whoa, take it easy, girl!”

TVLINE | I went frame-by-frame during your fight and saw that it was her throwing those insane kicks.
MING | And then she doesn’t want to stop. She wants to keep doing it again, and again, and again…. I was like, “OK, Ming Q” — that’s my double — “you come in. I want to rest.”
NATALIA | It was amazing, though, for me to have Ming as my counter-actress. I always think about how it was hard for me to come up in a world that was very patriarchy-driven, so I can’t even imagine how it was for Ming. I always look up to her because she’s done it with such grace and elegance. She’s a good actor and a good professional, but she’s also an awesome human being.

My enthusiasm also comes from me being in front of someone who as a young girl I watched in Mulan! To me, I was in front of Mulan. It’s very exciting to be sparring with someone who is so respected not just as an actress but in the physical acting community.