Warning: Oh, c’mon, this ain’t your first rodeo. The following contains spoilers for Sunday’s Yellowstone, and you darn well know it!

Just a week ago, I wasn’t sure that we’d ever see Yellowstone’s Jimmy back in the saddle again, but in Sunday’s episode, he went on what I suspect he’d agree was the ride of his life. In other developments, Beth kinda-sorta proposed to Rip (or at least proposed that he propose), Kayce accepted the Livestock Commissioner post that wasn’t so much offered to as inflicted on him, and John contemplated adding a small graveyard to the Dutton Ranch for some visitors who couldn’t fathom why they weren’t as welcome as cattle. But that’s just the semi-redacted CliffsNotes version of a recap; read on, and we’ll get into all the details. 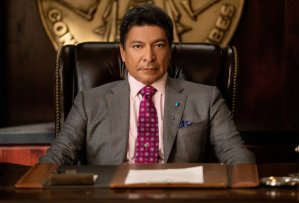 ‘EVERY ROAD FROM THE RODEO LEADS RIGHT HERE’ | As “Going Back to Cali” began, John visited Jimmy at the hospital and read off his litany of grievous bodily injuries — and the drastic measures that had been taken to splice him back together. When Jimmy wondered aloud how he was going to pay for it all, John cracked, “The hospital’s pretty curious about that themselves.” But seriously, the rancher would cover the expenses so long as Jimmy promised never to compete in another rodeo. “It’s the only thing,” Jimmy admitted, “that ever made me feel like I was worth something.” Then learn the rope, John said. That way, “all you’re risking is a thumb, and you got two of those.” Later, Mia showed up just as Jimmy was getting his catheter removed. “Is it swollen?” she asked. Nope, that was the way “it” always was, apparently; good for you, Jimmy.

After declaring herself the patient’s girlfriend and helping him get his newly-replaced hip moving down the hall, Mia suggested that she and Jimmy “consummate this deal,” right then and there in his hospital room. Though Jimmy threw up one excuse (“I don’t want it to paralyze me”) after another (“You’re too pretty for a guy like me”), he finally confessed that the reason he had “scared virgin face” was because he was, in fact, a scared virgin. So she simply dropped trou, hopped on and announced that that was fine. “I’m being your first.” Meanwhile, Chief Rainwater met with an attorney who warned that Market Equities could drag out their cease-and-desist order for years. That being the case, the chief was going to have to do something that he really didn’t want to, something that would make his people hate him: call Angela Blue Thunder. “You need to sage off,” Mo said, “after you speak with her.” 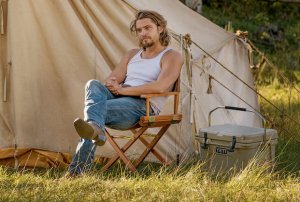 ‘HELLO, DEAR, HOW WAS YOUR DAY?’ | Elsewhere, Beth urged Bob to let her put out the word that Market Equities’ airport approvals aren’t guaranteed, thereby shorting their stock. OK, said Bob. But “just a little leak, don’t blow up the dam.” (Her plan worked like a charm, by the way; Beth is, after all, brilliant!) When she showed up at Rip’s that evening with groceries to cook him dinner, the lovers played a cute scene in which she had to remind him that “you are many things, but baby, funny is not one of them.” Baby? He liked the sound of that. “Call me that again.” She did, the moment growing ever more intimate. Then Rip asked what he should call her. “Wife,” she replied in a rare moment of total honesty. And, just as fast as she said it, she took it back. “I didn’t mean that.”

At camp, Lynelle explained to Kayce that “what the cattlemen of Montana need [from a Livestock Commissioner] is someone to protect their livelihood, and at that, you would excel.” Uh-uh, Jamie would, Kayce insisted. Ah, but the governor needed him to become Attorney General; she needed Kayce to be Livestock Commissioner and help her keep the valley from becoming a city. Why didn’t she just say no to the development herself? “If I say no, they just go get someone who’ll say yes, and they’ll have my job,” she pointed out. “It makes sense to Jamie. He knows how to make the law say no.” In other words, Kayce wasn’t being offered a job, he already had one, whether he wanted it or not. Post-meeting, Lynelle noticed that hmm, her ride back was gone. “This is almost kidnapping,” she told John, who wore her down with his patented “drop-your-dress-and-get-in-my-outfitter-tent look” and some whiskey. Fine, she’d stay the night. But “I have to leave first thing in the morning.” Maybe second.

‘BEING WITH ME IS THE END OF YOU’ | The following day, as Rip left for a cattle auction, Beth worried that she’d screwed up what they have. He insisted that she hadn’t, that the only reason he didn’t talk about the future himself was, whenever he did, she bolted. “I look at every day with you as a gift,” he continued, establishing himself as one of the small screen’s biggest romantics. “My tomorrows… well, they’re all yours. There’s no word that I’d rather call you [than wife].” Tearfully, Beth confessed that she always ran out on him when they got serious “because there’s only so much I can give you… I can’t have children.” Rip didn’t care one bit. Hell, “I don’t even like dogs,” he said. All the same, he could call her Beth… for now. At Rainwater’s office, Angela really leaned into her reputation, asking the chief if he knew what happened when one made a deal with the devil. He didn’t. And “that’s the big mystery, Tom.” Um, OK. Did that mean that she was gonna help? “If that’s what you wanna call it,” she replied. Yeah, definitely sage the hell outta that room.

After the cattle auction, Ryan, Colby and Teeter were driving home when they saw that a biker gang had cut the ranch’s fence and was having themselves a party. When Ryan’s Livestock Agent badge didn’t impress the tough guys (and gals), all hell broke loose… or we thought it had until Rip and Lloyd came rolling up. Seeing what was going on, Rip drove straight into the row of bikes, demolishing them! That’s when all hell really broke loose. When all was said and done (and beaten and bloodied), iron bars had been wielded, guns had been drawn, and Rip had warned the bikers, “You leave now, or you never leave.” Needless to say, that night, the bikers returned for their bikes — or what was left of them — and to torch the field. Also needless to say, John was waiting for them, backed by Rip, Kayce and (I think that was) Ryan. “This is my home,” John said calmly. “If I did this to your home, what would you do?” The bikers, natch, would kill him. So John had the threesome dig graves for themselves before letting them go. He wasn’t gonna cover over the holes, though, because “if you ever come back again, I’m-a fill ’em.” With that, he declared that he was moving back to the lodge. “My summer,” he sighed to Kayce, “is over.”

So, what did you think of “Going Back to Cali”? Jimmy’s first time? Beth’s power play — and her openness with Rip! And is randy Teeter ever gonna get some action? Hit the comments.