The following contains major spoilers from the two-hour Season 1 finale of TNT’s Snowpiercer.

Snowpiercer‘s freshman journey not only came to a stop on Sunday night, the actual train did, too — and under the most unexpected of circumstances.

The finale opened with Andre mulling a deal tendered by first class via Pike: surrender, and the tailies will be shown some mercy (though the rebellion’s leader will be executed). Nudging Andre toward saying yes was his discovery that Zarah is pregnant with their child. But before Andre signed on the dotted line, Melanie — saved from execution, by Javier — came to him with her own plan, to uncouple the section of cars carrying Commander Grey and his small army of jackboot enforcers. Then, once the excised septet of cars has veered away at a fork in the track, the two ends on either side would be carefully recoupled.

Melanie took care of separating the front end, while Andre was tasked with uncoupling the back end that is “behind enemy lines.” After signing the truce and gritting his teeth through a commemorative photo op with Mr. and Mrs. Folger, Andre slipped away, while Roche held Grey at bay, at gunpoint. Before uncoupling the cars, Andre saw that some of his fellow tailies would be left behind, shackled up as they were. And though he risked the critical timing to try to free them, in the end he had to say some sad, quick good-byes, before fulfilling his end of the mission just in time.

Not long after the cars carrying Grey & Co. drifted off course, and the two ends recoupled, moe drama was to be had, when Javi and Ben noticed music coming over the radio. Ben tried to obfuscate the source, but Melanie returned to the engine in time to help surmise that survivors are in the Chicago area somewhere. What’s more, they are aboard a second train, dubbed “Big Alice,” that was built using a prototype engine and was intended to tote supplies. No sooner had everyone spotted Big Alice out the window, running parallel to Snowpiercer (and Ruth rejoiced, “It’s Mr. Wilford!”), than the beefier train glided over and proceeded to attach itself to Snowpiercer’s tail. Andre, Till, Ruth and others waited anxiously in the tail, to see who would emerge after the back door was lasered open, while Melanie suited up to clamber atop the speeding Snowpiercer, run to the end, and hopefully sever Big Alice’s systems-hacking cable.

But when Big Alice hit the brakes for both trains, Melanie got lobbed into the snow drifts below, while a young woman boarded the tail to negotiate Snowpiercer’s surrender on behalf of Mr. Wilford — as well as ask if Melanie Cavill is alive. “Alexandra??” remarked Ruth, shocked to see Melanie’s presumed-dead daughter. Melanie, meanwhile, last was seen coming to on the frozen tundra outside, dwarfed by Big Alice beside her.

With Snowpiercer already renewed, long ago, for Season 2, TVLine invited showrunner Graeme Manson to break down the finale’s big twists.

TVLINE | So, tell me about Big Alice….
One of the things that I liked about the [Snowpiercer] graphic novels is that they introduce the concept of another train, so we married that idea with the return of Mr. Wilford. By now, we understand both Layton and Melanie and their backstory struggles and, in this case particularly, what drove Melanie to take the train, the deep connection with her daughter. So a new train on the horizon is just fraught for everyone. Also, it kept our art department in their toes. We love the aspect on Snowpiercer that any door you can open can lead to a surprise, something you never would’ve expected on a train, something quite spectacular. That’s something we really wanted to keep from director Bong [Joon-ho]’s movie, that sense of discovery constantly behind the next door, so now we have a whole other train to explore — and it’s not going to give up its secrets easily.

TVLINE | I was going to say, the introduction of a second train felt like an end-of-Season 2 move, since we never got to spend any time with Layton’s idealized version of what train governance could be like. Why did you want to introduce it sooner rather than later?
Well, it came right at the moment Layton set out to build a democracy and create a fairer system of play — and as we know, it’s hard enough to maintain a democracy let alone create one. It seemed proper really to put that concept and that essential need for equality, the equal redistribution of resources, to the test. After all, doesn’t that ring true in the moment? We wanted to make sure that [Andre’s campaign] was fraught with the actual stakes of what we see in the world around us.

TVLINE | So, the arrival of Big Alice won’t so much derail Andre’s plans but really put them to the test.
Absolutely. 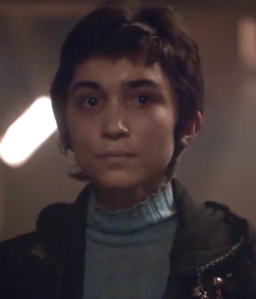 TVLINE | Melanie, Ben and Javi seemed slightly casual about spotting the never-before-mentioned supply train. Obviously they knew Big Alice was out there somewhere, so what to them is most surprising about encountering it now?
Well, they never would have thought that this old prototype engine could’ve been started up and running. Even without seeing him, it speaks a little to the true genius of Wilford, how he was able to survive out there. We’ve invested so much in Melanie and her backstory, we understand what it took for her as a scientist to rise above Wilford’s rhetoric and say, “He will doom humanity and I need to take this train.” That terrible, fateful decision she made in effect made her put on the shoes of an authoritarian to a certain degree, no matter how she tried to throttle it. All of those stakes piled on Melanie, so to see her backstory itself come over the horizon, we know what that means to her. And then to give the audience the final twist that her daughter has been alive for the last seven years and has been on the train with Mr. Wilford, you really begin to wonder what’s in store for Melanie.

TVLINE | Was Melanie being an unreliable narrator in the interrogation room a couple of weeks back, or did she truly think she had left Wilford to die?
No, she believed she had left him to die. Sadly, they believe that there is nobody left out there and that’s why that radio signal at first is so unlikely. And it’s also the reason why when Ben hears it, he deduces who it is and understands what that means to Melanie, and also that she would probably react emotionally to it. Melanie is not infallible, and that train over the horizon almost made her make the wrong decision. She’d almost drive the train to a full stop.

TVLINE | At the very end, with the slow sawing of the circular door and everyone waiting for someone to board the tail, I, like Ruth, was fully expecting that you’d show us Mr. Wilford. He’d then give us a cocky or menacing grin, before you fade to black. Instead, we got Allie (played by Rowan Blanchard). Why not go ahead and introduce him?
If you have any plans to introduce a big new character in the new season, it’s very difficult to have them show up at the end of previous season. When you’re in the crunch of shooting the finale of a season, how are you supposed to see far enough ahead to actually commit to casting that person? There’s a real, practical aspect to it, too. To cast a role like that takes a long time, so it’s pretty hard to do it for the end of a season. [That said, watch the Season 2 teaser revealing Wilford, in the flesh.]

TVLINE | I reckon this comes up a lot, but in your mind how tall is the train? At first I was like, OK, the Chains is two stories tall, but then you’ve got the subtrain, and a couple of weeks ago we saw the subtrain has a crawlspace beneath it…. And Big Alice is even bigger!
Some cars are double-decker levels, and some are single-level. It’s a specific, Wilford-built, wide-gauge track, rather than the original [4-foot-8] track gauge. If you Google “railroad track gauges,” it goes back to, like, the width of tires on Roman chariots — isn’t that crazy? So yeah, we needed a bigger train. I can’t remember the specifics, but we do have it completely scaled out at a 12-foot-wide track or something like that. Also, the subtrain runs low between the wheels, and each wheel stands something like six or seven feet high or something.

TVLINE | What are you most proud of from Season 1? Something you pulled off, something you did….
I’m really proud of all of the visual things that the art department pulled off, and the great work that James Hawes did with all our visiting directors. But I think I’m most proud of how this cast coalesced after such a long start to this show. They’re a very tight cast, and they worked together a year or more before I even came to the project, so the fact that they stuck with it and were so dedicated is a very rewarding thing.

Now, when I’m rewatching [episodes] during broadcast, it’s the smaller actor moments that really get me. Right now the one that’s sitting with me is the scene between Ruth and Melanie in the interrogation room. I love when it boils down to the two characters that the actors, the writers and the whole production have created, and they’re carrying all the problems of their own world, as created by the show. 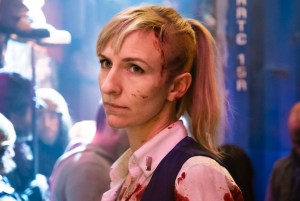 TVLINE | Season 1 was ultimately a variation on the events of the 2013 movie. What is Season 2 going to look like?
Well, there were a few characters that in Season 1 were a slower “cook” and whose stories are really going to blossom in Season 2. In that category, I’d put Ruth, Bess Till, Roche and Pike. These are all characters that have got a lot to give. Also, we have the tremendous mystery coming of, “Who is Wilford behind the curtain?” I’m really excited about that brand new element to the show and what life is like on that train — and how does Melanie hopefully get a hand on it, get dragged along?

TVLINE | Lastly, who gets custody of the Folgers’ cabin? Last we saw, Pike and his people were doing all kinds of wrong things in it.
Well, I can say that is answered in the first episode of Season 2.

TVLINE | OK, because I actually felt a bit bad for LJ at the end there, when she was saying to Oz, “I’ve lost everything.”
Those two characters, LJ and Osweiller, are an unlikely couple that have an interesting story ahead of them, too.

What did you think of Snowpiercer Season 1? Vote in the poll below! Also, email InsideLine@tvline.com with any burning questions you have about Season 2.