In the time-honored tradition of Disney Channel crossover events, the Baxter-Carter-Grayson gang is making tracks for Camp Kikiwaka.

Characters from Raven’s Home and Bunk’d will collide on Friday, July 24 in a one-hour special titled — what else — Raven About Bunk’d, and TVLine has an exclusive behind-the-scenes first look.

Per the crossover’s official synopsis, “Raven, Chelsea, Booker, Nia, Levi and Tess set out on a long road trip to Maine’s Camp Champion, but a GPS glitch sends them off course to Camp Kikiwaka, a place with an uncertain future even for those who can catch a glimpse of the future. While Raven and Chelsea hunt for Maine lobster, the kids make arts and crafts and develop feats of engineering, and then set out to find the camp’s infamous ‘Snipe’ in Moose Rump’s Forbidden Forest. The adventure also includes celebrity piglets, hidden tunnels and a musical performance, as the newcomers forge a camaraderie with Lou, Noah, Ava, Destiny, Gwen, Finn and Matteo – and set out to own the summer.” 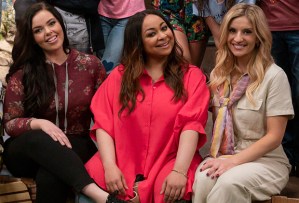 Raven’s Home, which wrapped its third season in May, stars Raven-Symoné as Raven Baxter, Issac Ryan Brown as Booker Baxter-Carter, Navia Robinson as Nia Baxter-Carter, Jason Maybaum as Levi Grayson, Sky Katz as Tess and Anneliese van der Pol as Chelsea Grayson. The follow-up to That’s So Raven (2003–2007) was renewed for a fourth season in Oct. 2019.

Meanwhile, Bunk’d is in the midst of airing its fourth season, having recently undergone a major casting change. The Jessie spinoff now stars Miranda May as Lou Hockhauser, Raphael Alejandro as Matteo Silva, Will Buie Jr. as Finn Sawyer, Shelby Simmons as Ava King, Mallory James Mahoney as Destiny, Scarlett Estevez as Gwen Flores and Israel Johnson as Noah Lambert.

Hit PLAY on the promo above for your first look at Raven About Bunk’d, then drop a comment with your thoughts below.