Wednesday’s episode of The 100 (The CW, 8/7c) hits the rewind button on the sci-fi drama’s final season, setting the stage for what could very well be the franchise’s next chapter. In addition to taking viewers all the way back to Earth’s first nuclear apocalypse in 2052, the pivotal hour — which serves as the backdoor pilot for a potential prequel series, potentially titled The 100: Second Dawn — also brings the story full circle in a number of exciting ways.

“Something I really wanted to do this season was to connect a lot of the dots, or fill in the blanks, whichever metaphor you want to use,” showrunner Jason Rothenberg tells TVLine. “We wanted to answer a lot of questions, including why the bunker was empty when they opened it in Season 4. I made a promise to John Pyper-Ferguson back in Season 4 that he was going to be involved with the show for more than that one episode. And I finally made that promise come true… three years later.”

Indeed, Wednesday’s episode (“Anaconda”) paints a complete picture of Pyper-Ferguson’s character Bill Cadogan, the mysterious “Shepherd” of the Disciples. More importantly, we’re finally introduced to his oft-mentioned daughter Callie, who has all the makings of The CW’s next great heroine.

“The original show was always about seeing how far people would go to survive,” Rothenberg says. “It was a story of tribalism and showing what people would do to protect the ones they love. In this new show, Callie’s mission statement is: I don’t care who they are, I’m going to save them. She’s a protagonist for our time.”

Callie’s portrayer, British actress Iola Evans, was discovered through a global casting search, and Rothenberg says the competition wasn’t even close. “There were a bunch of people who were interesting, but there was no one I had fallen in love with,” he recalls. “On a flight back home from New York in December, which was getting pretty close to when we had to shoot the episode, I watched her self-tape audition and it was instant. She’s just so talented, and she has no idea how good she is yet, so it was awesome getting to be on set with her [and director Ed Fraiman] and really help her find that performance. I adore her, and whether or not this series gets picked up, that girl is going places.” 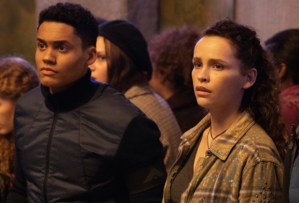 This week’s episode also introduces us to Callie’s brother Reese (played by The Bold and the Beautiful‘s Adain Bradley, but before you go dubbing them as the next Bellamy and Octavia, Rothenberg says we’re going to see a very different dynamic between these siblings. “Bellamy was essentially a surrogate parent to Octavia from the time she was born,” he says. “That relationship started out strong, but it went through some ups and downs and peaks and valleys once the show started. There’s a bit of a Cain and Abel story [with Callie and Reese]. She’s the free-spirited leader traveling her own path, while her brother always craves their father’s approval. Because he never gets it, and Callie does, it creates a bit of a sibling rivalry that becomes very intense.”

So, how should you prepare for Wednesday’s critical hour? If you can’t go back and watch full episodes from earlier in the series, you might want to at least re-familiarize yourself with the first apocalypse, aka “Praimfaya.” In fact, it wouldn’t be a terrible idea to scroll through that entry in the show’s Fandom wiki before you watch. (It’s OK, I’m not your social studies teacher. I won’t tell anyone you used a wiki for research.)

Hit PLAY on the extended trailer for The 100 prequel’s backdoor pilot below, then drop a comment with your thoughts. Are you excited by the prospect of keeping the franchise alive beyond this final season?