Warning: You don’t have a prayer of being surprised by Tuesday’s Greenleaf if you read this recap before watching — it’s filled to bursting with spoilers.

Unless I miss my guess, there were a lot of Greenleaf fans’ jaws on the floor at the end of Tuesday’s episode. Because, though the prevailing theory was that AJ’s deep, dark secret was that he wasn’t really Grace’s son, that wasn’t even close to the truth. So why did he try to commit suicide? Read on… 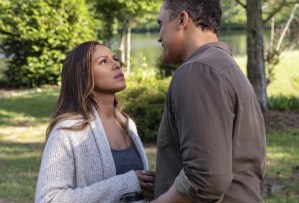 ‘ONLY GOD TALKS TO ME LIKE THAT, JAMES!’ | At the start of “The Third Day,” Darius dropped by the Greenleaf Estate to see Grace before jetting to Vegas to investigate Eden Vale Lending. It was an early flight, but hey, he’d gotten a free trip to Sin City, Grace noted. Actually, Darius had had to buy his own ticket. Turned out, the previous evening, he’d been canned when he’d refused to give up his story on Bob and Hope & Harmony. So “wish me luck,” he said before surprising his old flame with a warm kiss. Inside, as Bishop and Lady Mae struggled to come up with a name for their new church, he also continued to struggle with his memory. “You have got to stop this brown-liquor-at-bedtime thing,” she scolded. But seriously, she knew that there was a problem and insisted that he get a physical. And by “insisted,” you know very well that I mean made the appointment for him. When Charity passed through the room, Lady Mae couldn’t resist taking a few digs at her, especially after she turned down her father’s offer to be associate pastor at the new church. Can’t she see, Lady Mae asked, that if she keeps working for Phil and Judee, “it’s just a matter of time before [they] have you rocking their lil’ cinnamon-milk babies to sleep like a mammy”? In response, Charity asked whether it had occurred to her mother that maybe she had a plan. “Does it occur to me?” Lady Mae deadpanned. “No.”

Meanwhile, Jacob and Tasha paid a visit to Basie’s half sister, Tara. En route, when they weren’t eyeing each other up one side and down the other, Tasha revealed that her husband’s body had been found in a roadside motel. And Rochelle? Nobody knew where she was. Once the twosome sat down with Tara, Jacob got right to business. Basie and Rochelle had believed that Bishop killed their father, Darryl — did Tara think so, too? “Yeah, that’s accurate,” she said. She just hadn’t done anything about it because she’d predicted that one day a Greenleaf would be moved by God to make things right. Key to ascertaining Bishop’s guilt or innocence was a call placed to Darryl on the night that he died. Had Bishop been the caller who’d instructed Darryl to go to the church? Or could it have been Mac? Basie’d always said it had been Bishop. But how could he know? Had he answered the phone? Of course, being as deceased as his father, he couldn’t exactly be questioned now, could he? Finally, Jacob made things awkward — well, awkwarder — by inquiring about the relationship between Darryl and Loretta Davis. After Tara shut down and showed out her guests, she rang someone — who, we couldn’t tell — to report that Jacob had just come by. 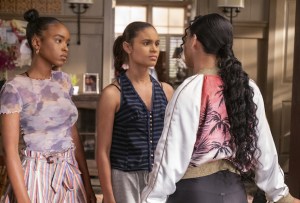 ‘YOU’RE AN UGLY PERSON, AND THE NINE POUNDS OF MAKEUP YOU WEAR ON THAT DINNER  PLATE WILL NEVER HIDE THAT!’ | At the cabin, after Zora helped Sophia get her topless pics off the web (a miracle if ever there was one!), Grace’s daughter began trashing Nikki’s clothes… just as Dante’s former ex-girlfriend walked in. Quicker than you could say, “Fight! Fight! Fight!” the girls were going at it — even physically, after Nikki snarked that at least she could have babies. Once Zora had broken up the fracas, she told the rhymes-with-witch to get out and stay gone. She then reassured Sophia that she hadn’t said anything about the fact that she couldn’t have kids and encouraged her to “write an emo song,” something, anything, to get her rage in check. At the main house, no sooner had Grace reported that AJ hadn’t allowed her and Noah to visit than her mother was going on and on about how handsome the boy’s father was. Didn’t Grace think so? “You know, Mama, it wasn’t foremost in my thoughts,” she replied, “given the circumstances.” But there was no stopping Lady Mae. She all but offered Noah the cabin once Zora had left for college, and when Grace checked her ears to see if she should believe what she was hearing, her mother suggested that, where AJ was concerned, “it is foolish to ignore the fact that one of you gave him away and the other didn’t even know he existed.” Da-amn. She usually saves that level of nastiness for Charity!

All Lady Mae meant, she clarified (too late), was that she thought that Grace and Noah ought to connect as a team in hopes of reaching their son. Understandably upset, Grace excused herself and was followed by her father. He suspected that what had turned Lady Mae so mean so fast were residual issues stemming from their disagreements about Faith — disagreements that had cost them dearly. Lady Mae just didn’t to see history repeat itself. At Calvary, Phil and Judee continued to make Charity feel as if she was doing penance every second of the day. First, he asked his ex to do the welcome at the next service rather than preach. Then he asked her to help Judee with the music. Finally, Judee rubbed her engagement ring in her rival’s face, prompting Charity to ask if she’d ever heard the story of the tortoise and the hare? Is Charity supposed to the tortoise? Judee asked. Oh, hell no, “I’m Godzilla,” she said, “with the emphasis on God,” and if Judee thought that she and Phil could make her so miserable that she’d quit, they had another think coming! Needless to say, Charity was not receptive when Phil later asked if someday maybe they’d be able to talk like they used to. No, he was stuck with the job that he desperately wanted — and a fiancée that he couldn’t stand.

‘YOUR S–T’S GOT NOTHING ON MINE’ | While Lady Mae and Bishop were busy accepting Karine’s offer to be the music director at their new church, Sophia received a call from AJ: He wanted to see her! He didn’t want so much to talk to her, though. He just wanted to say goodbye before he got sprung from his psych hold and left town. Sophia wasn’t eager to let go of her brother, but she promised that she would — if only he’d open up to her about why he’d tried to kill himself. Elsewhere, as Jacob dropped off Tasha, she asked if he’d really liked her back when… or had it been just… you know? Oh, he’d liked her. And what’s more, he still did. But he wouldn’t let her so much as kiss him. Once his divorce was final, he said instead, “maybe we can get to know each other again. Let’s do it right this time.” Back home, he stunned Kerissa by announcing that he definitely wanted shared custody. And if pursuing it put Bishop in jail? “Either he belongs there or he doesn’t,” Jacob said. “Either way I’m about to find out.” On that note, he interrupted his father’s Jane Fonda workout to ask if he’d called Darryl the night that he died. No, Bishop insisted. Had he known that the Greenleaf Estate had originally been willed to Darryl? No again, Bishop insisted again. That was news to him. (Although, given his recent memory issues, could we really be sure?)

Upstairs, Lady Mae extended an olive branch to Charity by way of her old choir songbook — in which she’d written Rev. Charity Greenleaf. “Singing was never my dream,” she said, gazing at the proof. Well, her dream might yet come true. The offer to be associate pastor at the new church still stands, Lady Mae said. And by the time she left the room, Charity had given her the perfect name for it: Eternal Faith Fellowship. Which seemed fine and all but also kinda like the name you’d get from a book of Church Mad Libs. As the hour drew to a close, Sophia emerged from AJ’s hospital room and informed Grace that he wanted to see her. Steeling herself, she sat down at her son’s bedside. “I’m gonna tell you something, and after I say it, I don’t want to talk about it,” AJ began. “I’m sick of being treated like a puzzle everyone’s trying to figure out.” So… what had driven him to want to take his own life? “I was raped in prison, and one of the bitches who did it gave me HIV,” he said. “That’s my life. That’s the situation, OK?” And there it was. So, were you surprised to learn that that was AJ’s secret? There’s no way Grace can let him leave, right? And how killer were the sparks flying between Jacob and Tasha? Hit the comments with your thoughts.