This recap contains spoilers from Episode 8 of DC’s Stargirl (which premieres new episodes Monday on DC Universe and Tuesday on The CW).

Stargirl had to sit on the sidelines for much of this week, in the wake of trading brutal blows with Shiv. That left the rest of the new JSA to investigate this new archenemy, with mixed results.

For starters, we saw that Pat purposely barreled his beloved Buick into a tree after retrieving injured Court from the site of her showdown with Shiv. That way, they had a cover story for when he admitted her to the hospital. When Courtney came to, Pat said she needed to recoup while he looked into the villainous Cindy Burman’s parentage. (Did I miss how Pat knew who Stargirl had battled with?) Pat also said it was time to loop in her mother Barbara, whom he had just called home from her business trip with Jordan. Court, though, argued that they should wait until after the ISA has been vanquished — a decision that will surely blow up in their faces. 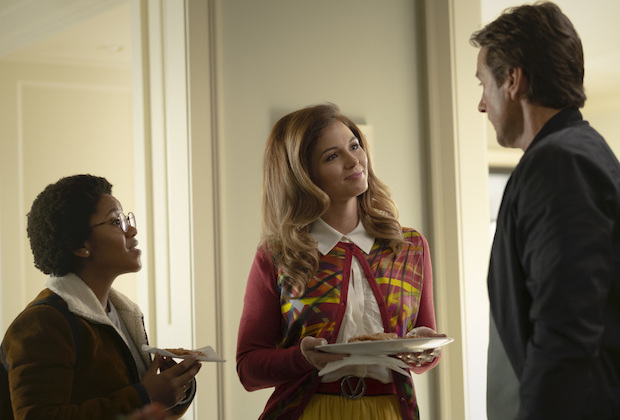 Irked that Courtney fought solo against Shiv, Rick, Beth and Yolanda were determined to do some recon during their teammate’s incapacitation. To that end, Beth went knocking on the Burmans’ door, aiming to introduce herself to stepmom Bobbie as a classmate looking for cheerleading tips from Cindy. Worried about Beth going it alone, Pat showed up just as Bobbie answered, passing himself off as Beth’s step/adoptive dad. While noshing on some cookies offered by their Stepford Wife-y host, Beth used her goggles to get a read on Bobbie, only to have Chuck turn up zilch. Then, while Pat entertained (an apparently “thirsty”) Bobbie, Beth first sneaked down into the tunnels, after spotting/accessing the keypad, but one roar from Solomon Grundy sent her scampering back upstairs.

Cindy meanwhile showed up at Courtney’s house, to pay her injured classmate a visit and bring candy. Court was understandably on edge throughout the visit, as Cindy spoke innocently enough about their growing connection and the things they have in common… though always in a way that could be read as her alluding to their super identities. Cindy, though, erased any doubt about how much she knew when she bid Courtney good-bye, by remarking on how much she admires “your staff… Stargirl.” Cindy said she would do Courtney no more harm just yet, at least not until she first has a chance to kill all of her friends!

Back at the Burmans’, Beth slipped up to Cindy’s bedroom (while Pat tended to Bobbie’s plumbing), where she eventually eyeballed/pocketed an old photo of an Asian scientist whom Chuck ID’d as a long-dead war criminal. When Cindy came home and announced herself to Bobbie, Beth panicked a bit, until Wildcat showed up outside on the ledge and yanked her friend out the window, into strongman Rick’s waiting arms. Regrouping down the street, Beth showed the scientist’s photo to Pat, who immediately recognized the man as Dr. Shiro Ito.

Courtney, meanwhile, had texted Yolanda that Cindy knows that she is Stargirl. When Yolanda texted back with a recap of their scare with Beth, Court suited up and went to fetch the Cosmic Staff. Per Pat’s earlier heartfelt instructions, the staff was reluctant to lead Courtney into harm’s way. But when Court explained that Pat and the others were in danger, it obliged, eventually sending Stargirl careening through Cindy’s bedroom window to kick off a rematch. The girls’ brawl soon enough made its way onto the nighttime street, where Stargirl held her own a bit better, all things considered (though Cindy was neither suited up nor wielding her own staff).

Henry happened upon the fight and pulled over his car to observe, all the while hearing the thoughts of each combatant as Cindy pinned down Stargirl and struggled to plunge her blade into her foe. Overwhelmed at the end of what was already a “big” day for himself, Henry clutched his overworked noggin and bellowed, emitting a blast that knocked the girls apart. No sooner had Cindy gotten up than three of her angry father’s robed minions emerged from the shadows to grab her and lower her into a nearby manhole, with no one seeing. Henry meanwhile realized that Courtney was Stargirl and blamed her for Cindy’s sudden vanishing, before leaving the scene.

⭐️ After a cozy-ish little dinner in Oakville with Barbara, Jordan popped up in the hotel room of some guy who neglected to blow the whistle on his chemical company’s sketchy ways — practices that led to the poisoning of people such as Jordan’s wife. Jordan then turned into Icicle and froze the man to death with his breath.

⭐️ In the course of admonishing Cindy for suiting up, Dragon King affirmed that he holds her responsible for whatever happened to her mother.

⭐️ As referenced above, Henry’s frantic rummaging for more headache medicine (no medicine cabinet there at the house, Kings?) led him to discover an odd key in his father’s desk, followed by the realization that he can move objects with his mind. Henry merged the two finds to discover that they key opens a secret room behind a bookcase, leading to a strange (Brainwave’s) costume and stacks of VHS tapes.

⭐️ Mike’s redemption/I’m Not a Completely Cloying Brat storyline continued with him bringing the greasiest Totino’s pizza rolls to his bedridden sister, and apologizing for/clarifying his “Stop hogging my dad!” remarks at the Big Game.

What did you think of the episode “Shiv Part Two?” Also, did you hear about Stargirl‘s Season 2 renewal — as a CW-only series?