Warning: The following contains spoilers for Sunday’s heart-stopping Yellowstone. If you’d rather watch first, read later, giddy-up, up and away.

The end of Sunday’s Yellowstone just about broke us — and it looked like it had literally broken poor Jimmy. At the first rodeo that would count toward his standings, he’d no sooner worked up the nerve to talk to pretty Mia — and even ask her out — than he got thrown by a bronco that was said to be so mean, it didn’t even have a name. Worse, he was not getting up afterwards. Read on, and we’ll go over all of the events that led to what looked like it could’ve been the end of Jimmy’s days in the saddle. 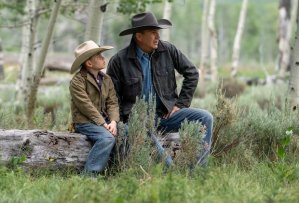 ‘I THOUGHT RANCHING WOULD BE TOUGHER’ | As “An Acceptable Surrender” began, John and Tate did a little grandfather/grandson bonding by pissing into the wind to help a little elk elude a hungry wolf. Once their tanks were empty, John painted a bleak picture of what life as a rancher was like, what with all the regulations and droughts and Sasquatches and whatnot. “What the hell is a Sasquatch?” asked Tate. Cute, bittersweet stuff. Meanwhile, at the governor’s office, Lynnelle informed A.G. Stewart that Cassidy has been made Deputy A.G. of the entire US. So wouldn’t he please remain in office until she could hold a special election? No way, he replied. He was three weeks away from retirement.

Just then, in walked the governor’s next quandary: Ellis & Co. with a proposal for their development that would bring in between $3M and $6M in tax revenue annually. Oh, and by the way, they didn’t want to build their airport at the Paradise Valley Sporting Club anymore, they wanted to build it… smack dab in the middle of Yellowstone. “That’s a seven-generation ranch,” Lynnelle pointed out. John will “never sell.” Big whoop, Ellis replied. “Then you’ll invoke eminent domain.” She’s done that before, she pointed out — and the Duttons’ patriarch beat it. Not when he was up against a fortune in revenue, he didn’t. Backed into a corner, Lynnelle had secretary Kate cancel her lunch… at which point the young woman phoned Beth and filled her in. 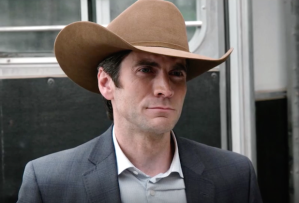 ‘DO YOU RECALL THE EVENTS I AM REPEATING TO YOU?’ | When Jamie met with Hendon in prison, it seemed that he already had a plan in mind to get the agent off the hook. Hendon, Jamie explained, was to say that the deputies had assaulted the now-deceased suspects prior to his arrival. After Hendon took them out to look for the other horses they’d stolen, he was forced to swerve to avoid an accident. Only when he checked on the prisoners did he find that — gasp! — they’d succumbed to injuries sustained in the beating that the deputies had given them. Got that, Hendon? Off the intel that she received from Lynnelle’s secretary, Beth confronted Roarke — again, in the river. Predictably, he was not sympathetic to John’s predicament. “All we’re gonna do is make him one of the richest men in Montana,” he grinned. “Oh, the tragedy.” What’s more, there really wasn’t anything the Duttons could do to stop it. So “make us a proposal,” he told Beth. “We’d prefer to avoid a fight, but we’re not scared of one, either.”

Back at Jamie’s office, the new livestock commissioner was visited by county attorney Randy Harper, who was chagrined to learn that there was a recording of the conversation in which he’d asked for the still-dead prisoners to be taught a lesson. Of course Jamie’d recorded the call, he hollered. “You think this is my f–king hobby?” In the end, they agreed to tag the deceased as John Does who’d died in a drunk-driving accident. What about the victim, though? She saw everything. Hmm… Jamie handled that loose thread by “bonding” with the girl’s father. Jamie’s sister had been beaten up, too, he shared. And “a man who puts a hand on a member of my family never puts a hand on anything else.” Dad understood all too well — he wanted to kill the men who’d hurt his daughter. Uh, “you don’t have to do that,” said Jamie, revealing the blood in back of the trailer. Gobsmacked, the man told Jamie, “You should run for governor.” So now the guy was both an accessory to murder and Jamie’s biggest fan. That was sure to work out well. 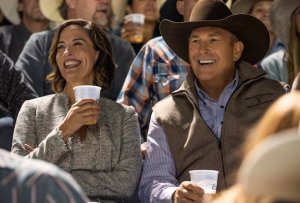 ‘TIME IS NOT ON OUR SIDE’ | Jamie got to be pretty pleased with himself for about one hot second before he got a call from the governor asking for a meeting with him and his father. Panicking, he rang Randy to ask if he’d blabbed to anyone. No, insisted the county attorney. This mess was all Jamie’s now. “You’re on your own.” When Jamie told John that Lynnelle had requested a sitdown that very day, he decided on the spot that the gang was going to watch Jimmy in the rodeo — the governor could come to him, not the other way around. Left behind to watch the cattle with Colby, Teeter took a good ribbing from Jimmy and the bunk-house boys. “Take care of our friend,” Jimmy teased. “Go slow, he’s a romantic.” Needless to say, she just cussed him out, further endearing her to Rip.

Hilariously, at the rodeo, Rip and Beth held hands but ultra-discreetly. “I guess everyone thinks I’m the dumbest man in the valley,” said John. “You can hold ‘er damn hand, Rip.” When Lynnelle joined the group, John asked if they could put off discussing the problem until the following day. Tell ya what, replied the governor. “I’ll give you the solution tonight and the problem tomorrow.” If he accepted her solution, they could “play teenagers” for the rest of the evening. So, her solution to the undisclosed problem? “I appoint Jamie interim A.G., and Jamie appoints a person of your choosing to run the Livestock Commission.” Whether it was best for the state, she wasn’t sure. But it was definitely what was best for John. To what end? “To negotiate an acceptable surrender,” she said. Gulp. “What are we surrounding?”

‘LET ME PUT A LITTLE SUGAR ON THIS PILL’ | At camp, Teeter came on to Colby nine ways to Sunday before deciding, “S–t, you don’t like girls, do you?” Back at the rodeo, John informed Lynnelle that he didn’t have a substitute Livestock Commissioner at the ready. What about Kayce? He’d already told John no, sure. Then “I’ll ask him,” the governor said, “and he won’t say no.” Finally, Jimmy, little hearts in his eyes from Mia’s kiss on the cheek, got thrown so hard, it must’ve knocked what sense he ever had in his head clean out — and that was if he was lucky. So, what did you think of “An Acceptable Surrender”? Will Jimmy be paralyzed — or worse? And what do you make of Tater?