This week on TNT’s Snowpiercer, Andre marched the tailies toward revolution, while a power struggle ensued within first class itself. In the end, who was set to be executed? And are the rumors about [Spoiler] to be believed?

Ahead of next week’s two-hour season finale, this Sunday’s episode shook things up all throughout the train. With Miles’ help, LJ laid her own eyes on the engine section, setting the stage for Commander Grey and the Folgers to confront Ruth about Mr. Wilford’s MIA status. Ruth wrote off their theory as ridiculous, pointing out that Grey himself shook hands with Wilford — though the commander notes he hasn’t seen the boss man since departure, seven years ago. The first class committee summons Melanie for an urgent meeting, presenting her with the Wilford rumor. She bobs and weaves, claiming she saw him just the day before, then offering to get him on the phone. But the firsties aren’t buying what she is selling, so they have her thrown into the interrogation room. There, Melanie covertly signals the engine room to enter emergency lockdown mode, and though Javi is skittish about denying Grey and his jackboots entry, Ben gives his buddy the boot and then closes the steel door behind him, sealing off himself and Miles.

Meanwhile, upon getting word that LJ has set in motion a commotion up-train, Andre orders the signal to be sent all over — in the form of strips of red fabric — that the revolution is nigh! Till cuffs Layton and brings him to the tail, KOing one stubborn jackboot along the way. Arriving at the tail, Andre gives his people a rousing pre-game speech, before they begin their march forward, using the subtrain to traverse the first large span of cars. Once everyone else is done with the tunnels, Big John and some others stay behind to erect a barricade that spring-loads and shoots giant metal stakes — which they do, once Grey learns of the uprising and sends his men down below. 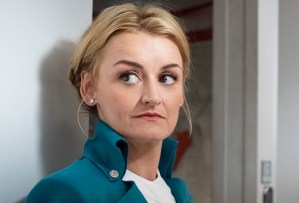 Back in the interrogation room, an angry, hurt and frankly embarrassed Ruth confronts Melanie about the lie she has been spinning all this time. Asked point blank if she killed Wilford, Melanie explains that the great Mr. Wilford was a fraud — that she did all the work in developing the train, while he never intended to use it to save humankind but instead to just have a good time. As such, Melanie left him trackside, to die, as the train pulled away on its perpetual journey. Not necessarily accepting Melanie’s version of events as truth, and also very bitter about their compromised friendship/being made a fool of, Ruth informs Melanie that she will be executed tomorrow, for betraying the train.

Meanwhile, as part of the tailies’ plan to fortify their ranks, Dr. Klimpt allows the Australian to access the drawers, first waking Strong Boy from suspension — though everyone is startled when the heretofore mute muscleman blurts out what they think to be Mandarin — and then Z-Wreck. But when they go to fish out Pike, that drawer is unexpectedly empty…. 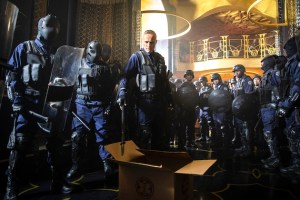 The tailie army first runs into Roche and his breachmen, who refuse to allow passage through the Chains. Luckily, Layton and Till manage to convince Roche and his team to step aside, lest they lose any men who will be critical to enforcing the soon-to-be-new world order aboard the train. Later, Grey and the jackboots arrive at the Night Car, which is seemingly empty save for a box in the middle of the dance floor… containing Gwyneth Paltrow’s head. No, wait, sorry, it was the head of the jackboot Till KO’d earlier. Emerging from the shadows of the balcony, Layton yells out for Grey, and the two armies begin to brutally, bloodily clash. Along the way, the tailies lose Patterson (the young man whose mom lost an arm, and later died) and some young woman with a birthmark on her face who was suddenly important-seeming. When Grey orders his men to retreat, Layton thinks the Night Car has been taken, until the jackboots return to launch teargas, forcing them to backpedal into the car behind.

As a shook Andre surveys the many casualties and brutal injuries sustained by his people, we realize that Pike had been retrieved from the drawers by Commander Grey, and now is sitting in the first class dining car with a very gooey slab of chocolate lava cake. He affirms Grey’s suspicion that he knows what makes Layton tick. And for the prize of one more piece of cake, he proceeds with his strategic analysis, saying that Layton was always more organized in his rebellious efforts than Pike ever was. And as such, Layton will only be able to stomach the chaos and bloody cost of battle for so long, until he cracks. And from the look of Andre’s horrified eyes, Pike just may be right.

What did you think of the episode “These Are His Revolutions”?