Darren Criss is fully in his element on Quibi’s Royalties, and not just because the 10-episode comedy finds him playing a Hollywood songwriter surrounded by Glee alumni.

The experience of co-writing and producing a musical project for a fledgling streaming service took Criss back to his days at the University of Michigan, where his mantra became “chaos is the mother of invention.” As he tells TVLine, “During the process, we made no claims to it working. We just had to slap it all together, and I think it turned out pretty great. That’s the fun of your friends coming together for something that ultimately has a lot of heart, soul and a cheeky earnestness about it.”

Criss also says he wanted to use Royalties as an opportunity to increase the Hollywood presence of his classmates-turned-collaborators, Nick and Matt Lang. “We started StarKid, which is our theater production company, about 10 years ago, and they’ve been in the trenches of that forever,” he explains. “Being the Mr. Hollywood of the group, I’ve been dying to get people in the film and television industries to get their eyes on them.”

For this reason, the trio took a “dexterous” approach to shopping the idea around. “If someone had said they wanted this to be a three-hour movie, we could have created it as such,” Criss says. “What’s nice about [Quibi’s shorter format] is that it’s a great exercise in maximizing the space you have. And it lends itself really well to comedy. Good storytelling is hopefully malleable, so I really enjoyed this process. It wasn’t how we set out to do it, but it was a great challenge.”

Below, Criss elaborates on the process of bringing Royalties to the small(er) screen, from casting it on his phone to editing it on the set of Netflix’s Hollywood: 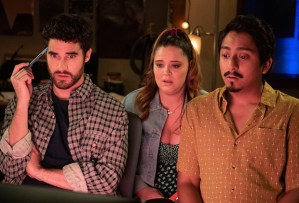 TVLINE | Let’s start with the important stuff: There are a lot of hot dogs on this show. How many did you actually have to eat?
[Laughs] Not many, because I’m not much of a hot dog guy. I’m not much of a processed meat guy. (Hashtag super California granola hippie loser.) While I do love a good hot dog every now and then, I don’t think anyone likes them in continuous succession, so I tried to minimize them as much as possible. That was the least of our challenges.

TVLINE | OK, what were some of the actual hurdles you had overcome?
Like a lot of things I’ve done, it was very fast and furious. The actual adage is that necessity is the mother of invention, but for a lot of those early StarKid shows, I amended that to say that chaos is the mother of invention. For a lot of the shows I worked on in college, I would write the songs just a few days before they were on stage. I also didn’t really know my lines and everything was thrown together, while the Langs had been working on the book for months. Similarly here, they’d been working on these scripts for months. But by the time pre-production rolled around, we had to write and record 10 songs in 10 days, then do pre-production for not only basically a 90-minute movie but also 10 separate music videos. [Director] Amy Heckerling flew in and also had very little time to prep. And we had to get it all done before I shot Hollywood for Netflix. So we had way more to do than was frankly possible.

On top of that, we didn’t really know how to deliver to Quibi. What are they looking for? What aspect ratios should we be shooting in? What type of coverage do we need to get? It was the Wild West in many respects. And that was something that could have been a huge problem, not having any precedent, but I’m someone who sort of relishes that. When you’re in the Wild West, there are no rules, which to me is a great thing.

TVLINE | When you go back and watch the episodes, do you find yourself watching horizontally or vertically?
I find myself going back and forth. When we were editing it, I would try to watch it on my phone as much as possible. The post-production process was the longest part of this entire thing. I would shoot a scene of Hollywood, then have to run over to the editing room. Sometimes the editing room would be in a sprinter van outside my trailer. It was tough because you’re editing in a conventional way with a nice screen and nice speakers, but the mix and the final print of this will be on your phone, which can be hard to imagine. For the songs, I wish people could watch with a big speaker system. I hope people are listening with their headphones.

TVLINE | Of those 10 songs you co-wrote, do you find that any one gets stuck in your head more than the others?
Well, they’re all stuck in my head, but not for the reason they should be. They’re in there because I had to listen to them over and over again, so I’m fond of a lot of the songs, but I’ve kind of lost objectivity. The songs have also had so many different lives. It sounds one way when you write it, another when you produce it, then another when you have the artist sing it. And then there’s how the song feels when it’s in a music video. There were lines in songs I thought were funny, but when I saw my friends [and Glee co-stars] Chord Overstreet and Kevin McHale singing them at a Griffith Park overlook of Los Angeles, with Chord in a ridiculous Scott Stapp/Jared Leto circa 2003 wig, I start loving it in a new way. They’ve all found ways to enchant me as they move forward.

TVLINE | That’s another thing I enjoyed about this, all the Glee reunions. And not just Chord and Kevin. Even people like John Stamos and Jennifer Coolidge.
You know what’s funny? I forgot that John Stamos and Jennifer Coolidge were on Glee! I became friends with them separately. Yes, they were on the show, but these are also people that were at my wedding. I forget we have a Glee connection. I wish I was that clever in the outset, like, how many people from Glee can I get together? … We actually started shooting before I had a huge percentage of people cast. This is in conjunction with a casting director, but I had to cast about 70-80 percent of this thing on my phone. It was me calling people and saying, “I have this really goofy thing. We’re homies, can you do me a solid?” So I owe a great debt of gratitude to the people who were game enough to show up to this wacky thing that I’m sure sounded absurd over my pitch on the phone, much less for a platform that they hadn’t heard of yet. The first season of anything is tough, because you have to establish so much. 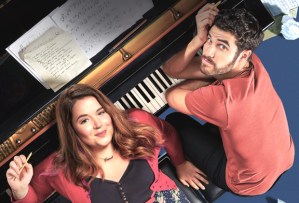 TVLINE | Well, without giving too much away, the finale does leave things open for a second season. How much thought have you given that?
Anytime you write anything, you always think bigger than what’s there. The game, so to speak, of having two songwriters that have to write songs for crazy situations and artists is an endless playground of funny scenarios. We came up with so many ideas for stories, at least five or 10, and then ended up saying, “This is a Season 2 or Season 3 concept. It’s too much out of the gate.” We really had to economize what we threw at our audience, so hopefully we can earn enough interest and trust in these characters and in their hijinks that we can expand the world a little bit in a second season.

TVLINE | On top of that, I feel like it’s a show that could lend itself to social distancing better than some others.
A lot of people have been considering that. What is the socially distanced version of our show? With enough creativity, you could definitely do that. I’ve done songwriting sessions from home — FaceTime, Zoom sessions and all that. There is a world where that exists, so who knows? If that happens, you can say you wrote it here first.

All 10 episodes of Royalties‘ first season are available to stream on Quibi. To watch individual music videos on Criss’ YouTube channel, click here.