Snowpiercer‘s Ruth Wardell, the deputy of hospitality, has a big decision to make as the TNT drama chugs closer to the end of Season 1.

When last we tuned in, Commander Grey had turned his and Ruth’s fleetingly sweet lunch date into a job interview of sorts, as he and the Folgers invited the dutiful staffer to seize the hospitality chief position if boss lady Melanie Cavill is usurped.

Will Ruth’s suspicions about Melanie’s decision-making — coupled with the ladies’ very recent verbal clash — nudge her to participate in this coup? And how might Ruth react if she gets wind of Mr. Wilford’s apparently MIA status? TVLine invited The Americans alum Alison Wright to preview this Sunday’s episode (TNT, 9/8c) as well as the two-hour finale airing July 12.

TVLINE | I’m sorry your date with Commander Grey didn’t go so well.
No, right? Poor thing…. She got so dressed up for it as well! She was really looking forward to that.

TVLINE | Speaking of which: When Ruth puts on her regular clothes for a day off, what all might she spend her time doing? Like, are there nice boutiques on the train, theoretically?
Well, yes, yes, theoretically there are, but it’s very telling that it’s Ruth’s day off and she’s in the office. It’s so telling that she’s that person, that she very well could be at a bowling alley or a movie theater or getting her nails done or getting her hair done, but instead she’s going into work to see if there’s anything to look at, anything needs to be done. 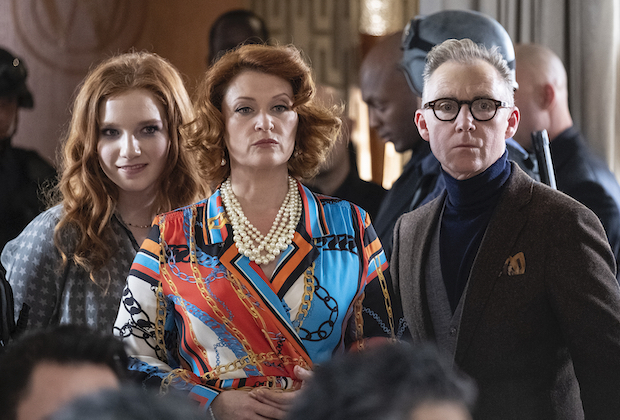 TVLINE | Given that she is such a dutiful employee, how would you describe her initial reaction to the overture made last episode, to be a part of this coup with the Folgers and the commander?
Well, not to spoil anything, but I think she’s been pretty shocked with all the past developments of the past few episodes. She is shocked that Melanie ever thought it was a good idea to bring a tailie out to have him investigate these people, and to have this trial with the Folgers, and then that weird thing where the sentence is passed but then commuted, and Melanie changing the rules by fast-tracking Miles to the engine. All these strange things happening, so Ruth’s very much like, “What is going on?”

Everything is just going bananas, but when the Folgers suggest that [takeover] to her, I mean, that’s like high treason right there. Ruth knows that it’s a smart move to keep on the Folgers’ good side, and she wants to keep on Commander Grey’s good side because he’s essentially the head of SS on the train, but even just hearing this treasonous conversation is very shocking to her. I think she needs to take a minute to even deal with the implications of that.

Of course, she would love nothing more than to be Mr. Wilford’s right hand. She’s under the spell of him as, like, a cult leader, for sure, but we do see her run to Melanie [after being approached] and, unfortunately, she gets Melanie at the worst possible time. She doesn’t get to tell her whatever it was she was going to tell her.

TVLINE | Worse, Melanie got in a dig at her bed-and-breakfast beginnings!
It’s always about timing, right, and for her to make fun of her a little bit and belittle her like that when Ruth really does try really hard…. She lives for the train, she lives for her job, she wishes she was as great as Melanie. She wishes she could be just like Melanie, and I think it’s really hurtful for her that Melanie does that. 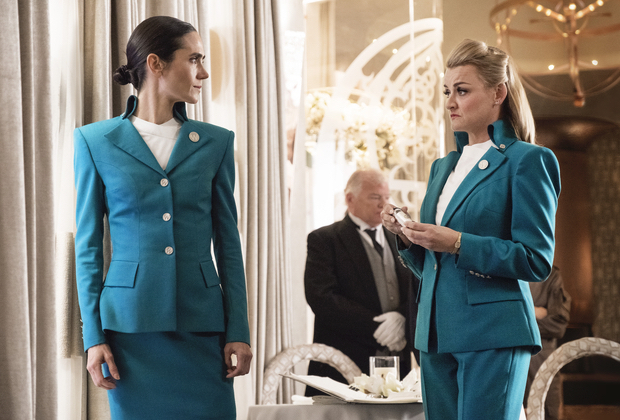 TVLINE | As Ruth considers her next move, is she only thinking about the mutiny aspect, or is there any concern about betraying a perceived friendship between her and Melanie? Does she think there’s a friendship there?
Absolutely. Yes. Yes. Ruth has no family on the train — she lives for the job, she hasn’t really got any friends, and I think she puts everything into the hospitality department, and so that would be Melanie all the time. Melanie doesn’t let Ruth in on lots of things for different reasons, but I think Ruth really looks up to her, and Melanie’s probably the person that she’s closest to on the train. They’ve been working together the past seven years, so yeah, she thinks they’ve been friends.

TVLINE | You talked about Ruth’s devotion to Mr. Wilford. How do you think she would react if anyone came to her with the theory that he’s not on the train?
She’d think it’s completely ridiculous, completely ridiculous. The staff has been told that Mr. Wilford is so special that he needs to be kept safe up at the front of the train, sort of “hermetically sealed” away from everybody else. Because if he dies, as far as Ruth knows, he’s the only one that can do all this, running the train. He was the one who invented all this, he’s the reason we’re all alive, and it’s just him, so he is a pretty special guy. It’s preposterous the idea that he’s not right where he’s supposed to be. I mean, he talks to us all the time over the channels, he sends us messages…. But Ruth isn’t really a “big picture” thinker anyway; you tell her something and then that’s what it is, that’s what she’ll believe.

TVLINE | We have this Sunday’s episode and then a two-hour season finale (airing July 12). What can you say about what’s coming up? For one, are we going to learn more about what actually became of Mr. Wilford?
Oh, yeah. Oh, yeah. This Sunday’s episode, I suppose it would be fair to say that’s when the s–t hits the fan, for real, on Snowpiercer. A lot of secrets are revealed this week.

TVLINE | And even looking ahead to Season 2, is there a chance we might ever see Mr. Wilford, in flashbacks or something?
Yes, there’s always a chance, right? There’s always a chance, I think. Before we end the season, a lot more will fall into place and become clear, and the end of the season has such an incredible high point that all those questions will be answered moving forward, yeah. There will be satisfaction by the end of Season 1.

TVLINE | How would you characterize the final moments of the season? What emotions will we be having?
It’s massive excitement. It’s a huge cliffhanger, where we end on a really brilliant moment. It’s thrilling for all of the people on the train — and it will be for the audience, as well.

Want more scoop on Snowpiercer, or for any other show? Email InsideLine@tvline.com and your question may be answered via Matt’s Inside Line.