The highly anticipated Snatch Game of Love finally arrived on Friday’s Drag Race All Stars, even if there wasn’t much love to be felt in the workroom. From some shady predictions to a possible conspiracy, the real challenge was being played behind the scenes.

It all began with the dramatic Ru-veal that everyone voted for Mayhem Miller to be sent home — including Mayhem. “You never give up on your dreams!” Shea Coulee fumed. Miz Cracker then shifted the conversation to a discussion about the season’s top three, asking her fellow queens to weigh in with any clear frontrunners. Based on performance, Cracker was named the likely winner, with Jujubee and Shea following closely behind. (As I’ve said, I agree with those queens being the top three, but I’m not sure I’d put them in that order.)

Going into the Snatch Game, the queens’ emotions were all over the map. Self-described “power bottom” India Ferrah was feeling the pressure, promising the viewers, “I still have a ton of tricks up my sleeves… and my pant slit.” Cracker, meanwhile, was arguably too cocky. “Even if I bottom today, y’all can’t get rid of me,” she said. “I just won!” And speaking of being all over the map, that’s probably the best phrase to describe the outcome of this Snatch Game. Let’s see how the final six queens fared:

JUJUBEE (EARTHA KITT) | Fully aware of this iconic actress’ place in Snatch Game herstory (previously done by Chi Chi DeVayne and Valentina), Jujubee made the conscious decision to “stand out by serving up this piece of p–sy.” I’m not even sure what she meant by that, but I feel like it’s exactly what she ended up giving us. Her voice was spot-on, her mannerisms were hysterical and she played off other contestants surprisingly well. (I especially enjoyed when she called out Blair St. Clair’s awkward, joke-free Ellen DeGeneres rants: “Back in the day, we called this white noise.”)

SHEA (FLAVOR FLAV) | What else is there to say? Shea became Flavor Flav in this game. A mind-blowing 180 from her previous Snatch Game character (she recognizes that Naomi Campbell was a “safe” choice), Shea’s take on this musician-turned-reality icon was so good, it was almost frightening. The voice, the physicality, the “14-inch… clock” joke. It was just perfection.

ALEXIS (WALTER MERCADO) | Much like guest judge Jeffrey Boweyer-Chapman, I have no frame of reference for who Walter Mercado is, but I feel like I know him intimately after watching Alexis’ fully realized portrayal. I loved the way she handled Cracker accidentally stealing one of her questions (“It was my question, dumb bitch!”), one of several cutting interactions with her fellow contestants. Sure, she relied a little too heavily on the old “I didn’t see that one coming” routine, but it was giving me Jaida Essence Hall/”Look over there!” energy, so I enjoyed it.

INDIA (JEFFREE STAR) | “Many people love him, many people hate him — kind of like my life story,” India said, justifying why she chose to portray the controversial beauty mogul. I can’t say she did a poor job of portraying Star, as she nailed his signature spooky look, but I can say with confidence that she failed to find the jokes. Not a single one.

BLAIR (ELLEN DEGENERES) | As I said earlier, Blair’s portrayal of the legendary daytime host was as uncomfortable as it was completely devoid of humor. She nailed the hair and clothes, but that’s about it. And what was with that thick Southern accent? Blair has really impressed me in the acting challenges this season, so maybe my expectations were a little higher than they should have been, but this was objectively bad.

CRACKER (LADY GAGA) | Cracker remained quick on her feet in this challenge, as always, but this may have been the most boring Gaga impression I’ve ever seen. Why would you choose to portray an eccentric musician with an endless catalogue of iconic looks… only to settle on such a basic red carpet gown?

The questionable decisions carried through to this week’s “Prom Queen Fantasy” runway, which found Cracker battling some prom night pimples, Alexis giving us quinceañera eleganza, India paying tribute to Morticia Addams, Blair serving “gender-bent illusion” in a pink tuxedo gown, Juju living out her ’80s crimped hair fantasy, and Shea giving her Season 9 elimination ensemble a Carrie-themed makeover. That last look was truly a stunner, so it was no surprise to hear Shea announced as this week’s winner, especially when you factor in her spot-on Snatch Game performance.

Then things got interesting. Shortly after Ru announced that anyone not named Shea was up for elimination (“If you’re not the top All Star, you’re in the bottom”), India decided to get something off her chest. Two weeks ago, Alexis and Mayhem allegedly tried to get India to join them in voting for Shea. (Mariah Paris Balenciaga was ultimately the one who went home.) None of the queens wanted to believe India’s story, but Jujubee raised a good point: If India was lying, that would mean she was a good actress… and she would have done better at Snatch Game. Harsh, but accurate. Alexis, meanwhile, offered this solid rebuttal: “India is the queen of stunts. She should have a show in vegas called The Stunt Queen.” 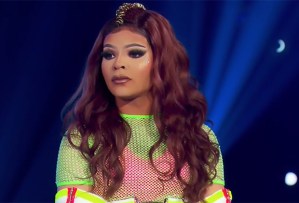 After hearing both India and Alexis’ sides of the story, Shea took on this week’s lip sync assassin (Alexis’ drag daughter Miss Vanjie!) in a high-kicking, death-dropping display of ferocity to the tune of Madonna’s “Open Your Heart.” And after what was clearly an exhausting win, Shea admitted to the judges that India’s Ru-veal was weighing heavily on her mind. “I don’t know if I can allow someone like that continue competing against me,” Shea said, before revealing that she chose to send home… India Ferrah?! (I guess that plan didn’t work out.)

“I can leave with my head held high because I got to show all the sides of India,” the eliminated queen said on her way off the runway, also stopping to tell Shea, “I didn’t lie to you.”

Do you agree with this week’s elimination? And do you believe that Alexis conspired with Mayhem to send Shea home? Vote for the queen you would have sent home below, then drop a comment with your thoughts.