Tasya Teles’ character has been going through a dramatic Echo-lution all season, but Wednesday’s episode of The 100 took her transformation to new heights. As first-time director Lindsey Morgan tells TVLine, “The Echo we once knew and loved is dead.”

This episode chronicles Echo’s struggle to cope with losing Bellamy, while also figuring out what to do about the whole “being imprisoned” thing. In her darkest hour, she remembers a conversation she had with Bellamy on the ring: After identifying loyalty as her weakness, he tells her, “We’ve all done bad things, some of them to each other. But we are a team now, a unit. Think you can be loyal to us?” They seal the promise with a kiss, which only becomes more bittersweet when you remember how their story has turned out.

“Don’t hate me, ‘Bellarke’ shippers, but I love that scene,” Morgan says of Echo’s romantic memory. “It’s just so sweet and pure. I thought Tasya and Bob [Morley] brought such vulnerability to it, and an excitement about the possibility of each other and something new — something beautiful that could be created out of their situation. It was a nice reprieve from all the crazy and the chaos, but it was also pivotal for Echo. We’re seeing Echo’s transformation … and I love that we got to flash back for a second to remember the root of her identity. I love that scene because it showed us why she became who she is now.”

Speaking of who Echo is now, the grieving assassin checks off the bad-ass scar box on her transformation to-do list before volunteering to throw down for the Disciples. “This is how my people show they’re ready for war,” she explains. “Free us and we’ll fight your war.” Gulp. “This new Echo is like nothing we’ve seen before,” Morgan confirms. “She’s empty. And she’s on a reign of terror and revenge.” Gulp again. 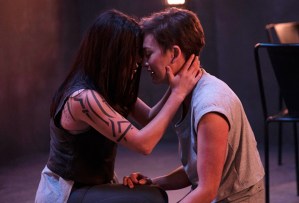 On a (somewhat) brighter note, Echo also shares a touching moment with Octavia, during which Bellamy’s sister says she regrets attacking him when Lincoln died. “I wish I hugged him instead,” she says, throwing her arms around Echo. “It’s not your fault. I’ve been there, and it’s not your fault.” (Is somebody cutting onions in here?)

Hope and Diyoza also come to blows this week, emotionally and physically, presenting an interesting predicament for for Morgan as a director. “Hope and Diyoza have become two of my favorite characters on the show. I love their story, and I love Ivana [Milicevic] and Shelby [Flannery]. Not only are they so talented, but they work so well together. That’s such a complex relationship. It’s so full of history, and now loss. That said, it was a five page scene in a cell block with four gray walls, and the first thing I was taught was to never shoot into a wall! So I had to think of how to make that look more interesting, but Shelby and Ivana did all of the heavy lifting with their great acting.”

MEANWHILE ON SANCTUM… | Emori’s “Reunification Day” celebration for the Children of Gabriel goes up in smoke when a touching reunion between Nelson and his estranged parents takes a tragic turn. While his mother is overjoyed to see him, Nelson’s father stands his ground and attempts to strangle his “abomination” of a son, which leads Nelson to murder him in self defense. (Holy traumatic experience!) Things go from bad to worse when Nikki crashes the party, though I have to give credit where credit is due — she’s probably the only reason Emori is still alive. I didn’t think she’d be able to talk Nelson out of pulling the trigger, which she did by explaining that proper kidnappers make demands first, but I’m glad she did. Don’t get me wrong, I remain extremely concerned about Emori’s future, but at least she survived one more week. On this show, that’s a feat.

And where is Murphy while all of this is going down? The poor fake god is trapped in an extraordinarily melodramatic chess game with fellow fake god Russell. Being alone with a fellow faker allows Murphy and Sheidheda to let their hair down and have a real honest chat. The Dark Commander tells Murphy to break up with Emori (rude!), and Murphy reminds him that his people loved Lexa more than him (true!) because she united the clans. This clearly strikes a nerve, because Sheidheda gets really pissed. “I united the clans!” he says. “They killed me because they were afraid of my ideas. Just like Lexa.” (Oh, damn.)

BACK TO BARDO… | Gabriel agrees to tell Anders everything he knows about Clarke in exchange for getting to research the Anomaly’s “true power.” As luck would have it, the episode ends with Clarke & Co. arriving in Bardo (fresh from Nakara!), only to learn about Bellamy’s death immediately upon arrival. Big bummer.

Anders, however, is positively giddy about this latest development. He doesn’t waste a minute, rushing off to wake the Shepherd… who apparently prefers to be called Bill. “Have we cracked the code?” Bill asks. “Has the war begun?” Anders replies with a creepy smile, “No. But we have the key.”

Your thoughts on Wednesday’s episode of The 100? Echo’s transformation? Any specific performances? Whatever’s on your mind, drop it in a comment below.