While Raven appears to be getting a good handle on the ever-expanding universe of The 100, her portrayer’s experience has been slightly different.

“This show does something different every season, and this season is complicated AF,” Lindsey Morgan, who makes her directorial debut with Wednesday’s episode (The CW, 8/7c) tells TVLine. “As a director, getting the lore right is the most important thing. I can’t get the world wrong. So I found myself really studying it, making sure all my T’s were crossed and my I’s were dotted. People are like, ‘Oh, was it easier because you’ve been on the show? And I’m like, ‘No!'”

Morgan also appreciated the opportunity to step into the minds of several characters with whom Raven doesn’t normally interact. Not only is her episode a dramatic showcase for Hope and Diyoza — newly reunited in an alien prison after a decades-long separation — but it also dives deep into the damaged psyche of an empty, heartbroken Echo.

“I approached them the same way I would approach my character,” Morgan says. “It was really just me getting to put myself in the shoes of all my cast mates and thinking how I could help to elevate or inspire them as actors.” (Revealing additional specifics about these characters’ developments would spoil this unpredictable hour. But don’t worry, we’ll go deep after it airs.) 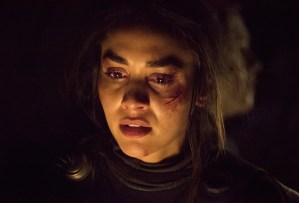 With The 100‘s series finale creeping ever closer, Morgan says she can look back on Raven’s journey with pride. “She’s been through so much, arguably some of the worst things on the show,” Morgan says. “She has failed, but she never fully lost her resilience. She has questioned, but she never fully lost her faith in love and in people and in herself. I feel like she was also tested in every way imaginable, but she never lost her heart — and I don’t think anyone would blame her if she had. I always held onto that for Raven. In the end, it’s her saving grace.”

The end of a long-running show is always a surreal experience, but Morgan says her physical farewell to The 100 was especially “strange” because of the coronavirus pandemic. “It felt like The 100 was seeping into reality,” she says. “It was weird and confusing, but in true 100 fashion, we kept going. We brought our A game and did the best that we could. It was unfortunately very unceremonious at the end because we all had to finish shooting as quickly as possible in order to go home and quarantine. We didn’t have a wrap party, so we didn’t have as much time to say goodbye. We weren’t even allowed to hug!”

Unlike hugs, however, tears were not in short supply. “I remember on that last day, our AD was [announcing everyone’s series wrap], and it was tears every time. And we have a huge cast! So there was a lot of crying, then makeup, then shooting again. It was crazy. We made something really special, and I’m proud of that.”

Are you ready to say goodbye to The 100, or do you remain in total denial? Drop a comment with your thoughts on the long-running CW drama below.